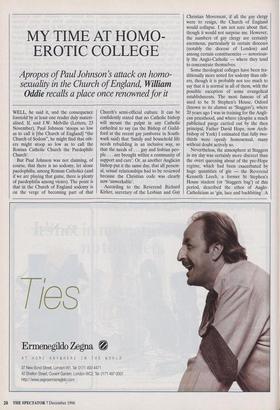 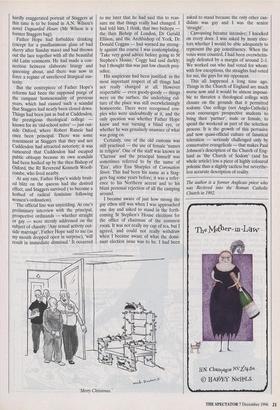 But Paul Johnson was not claiming, of course, that there is no sodomy, let alone paedophilia, among Roman Catholics (and if we are playing that game, there is plenty of paedophilia among vicars). The point is that in the Church of England sodomy is on the verge of becoming part of that Church's semi-official culture. It can be confidently stated that no Catholic bishop will mount the pulpit in any Catholic cathedral to say (as the Bishop of Guild- ford at the recent gay jamboree in South- wark said) that 'family and household life needs rebuilding in an inclusive way, so that the needs of. . . gay and lesbian peo- ple. . . are brought within a community of support and care'. Or, as another Anglican bishop put it the same day, that all person- al, sexual relationships had to be reviewed because the Christian code was clearly now 'unworkable'.

According to the Reverend Richard ICirker, secretary of the Lesbian and Gay Christian Movement, if all the gay clergy were to resign, the Church of England would collapse. I am not sure about that, though it would not surprise me. However, the numbers of gay clergy are certainly enormous, particularly in certain dioceses (notably the diocese of London) and among certain constituencies — notorious- ly the Anglo-Catholic — where they tend to concentrate themselves.

Some theological colleges have been tra- ditionally more noted for sodomy than oth- ers, though it is probably not too much to say that it is normal in all of them, with the possible exception of some evangelical establishments. The most famous of all used to be St Stephen's House, Oxford (known to its alumni as 'Staggers), where 20 years ago I was in training for the Angli- can priesthood, and where (despite a much publicised purge carried out by the then principal, Father David Hope, now Arch- bishop of York) I estimated that fully two- thirds were openly homosexual, many without doubt actively so.

Nevertheless, the atmosphere at Staggers in my day was certainly more discreet than the overt queening about of the pre-Hope regime, which had been exacerbated by huge quantities of gin — the Reverend 'Kenneth Leech, a former St Stephen's House student (or 'Staggers bag') of this period, described the ethos of Anglo- Catholicism as 'gin, lace and backbiting'. A hardly exaggerated portrait of Staggers at this time is to be found in A.N. Wilson's novel Unguarded Hours (Mr Wilson is a former Staggers bag).

Father Hope had forbidden drinking (except for a pusillanimous glass of bad sherry after Sunday mass) and had thrown out the lace together with all the beautiful old Latin vestments. He had made a con- nection between elaborate liturgy and queening about, and there was now in force a regime of unrelieved liturgical aus- terity.

But the centrepiece of Father Hope's reforms had been the supposed purge of the rampant homosexuality of previous years, which had caused such a scandal that Staggers had nearly been closed down. Things had been just as bad at Cuddesdon, the prestigious theological college known for its 'old-school mitre' just out- side Oxford, where Robert Runcie had once been principal. There was some resentment at Staggers that they and not Cuddesdon had attracted notoriety; it was rumoured that Cuddesdon had escaped public obloquy because its own scandals had been hushed up by the then Bishop of Oxford, the Rt Reverend Kenneth Wooll- combe, who lived nearby.

At any rate, Father Hope's widely bruit- ed blitz on the queens had the desired effect, and Staggers survived ( to become a hotbed of radical feminism following women's ordination).

The official line was unyielding. At one's preliminary interview with the principal, prospective ordinands — whether straight or gay — were sternly addressed on the subject of chastity. 'Any sexual activity out- side marriage', Father Hope said to me (as my mouth dropped open in surprise), 'will result in immediate dismissal.' It occurred to me later that he had said this to reas- sure me that things really had changed. I had told him, I think, that two bishops — the then Bishop of London, Dr Gerald Ellison, and the Archbishop of York, Dr Donald Coggan — had warned me strong- ly against the course I was contemplating. 'Take very good advice before going to St Stephen's House,' Coggy had said darkly; but I thought this was just low church prej- udice.

His suspicions had been justified: in the most important respect of all things had not really changed at all. However respectable — even goody-goody — things were on the surface, the underlying cul- ture of the place was still overwhelmingly homoerotic. There were recognised cou- ples who were undoubtedly at it, and the only question was whether Father Hope knew and was turning a blind eye, or whether he was genuinely unaware of what was going on.

Certainly, one of the old customs was still practised — the use of female 'names in religion'. One of the staff was known as 'Clarissa' and the principal himself was sometimes referred to by the name of 'Ena', after Ena Sharpies of Coronation Street. This had been his name as a Stag- gers bag some years before; it was a refer- ence to his Northern accent and to his blunt personal rejection of all the camping around.

I became aware of just how strong the gay ethos still was when I was approached one day and asked to stand in the forth- coming St Stephen's House elections for the office of chairman of the common room. It was not really my cup of tea, but I agreed, and could not really withdraw when I became aware of what the domi- nant election issue was to be. I had been Meny Christmas.' asked to stand because the only other can- didate was gay and I was the senior 'straight'.

Canvassing became intensive; I knocked on every door. I was asked by many elec- tors whether I would be able adequately to represent the gay constituency. When the votes were counted, I had been overwhelm- ingly defeated by a margin of around 2-1. We worked out who had voted for whom: with few exceptions, the straights had voted for me, the gays for my opponent.

This all happened a long time ago. Things in the Church of England are much worse now and it would be almost impossi- ble to threaten a theological college with closure on the grounds that it permitted sodomy. One college (not Anglo-Catholic) even encourages prospective students to bring their 'partner', male or female, to spend the weekend as part of the selection process. It is the growth of this pervasive and now quasi-official culture of fanatical toleration — seriously challenged only by conservative evangelicals — that makes Paul Johnson's description of the Church of Eng- land as 'the Church of Sodom' (and his whole article) less a piece of highly coloured polemic than a slightly tactless but neverthe- less accurate description of reality.

The author is a former Anglican priest who was Recieved into the Roman Catholic Church in 1992.