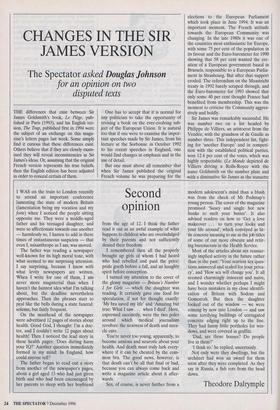 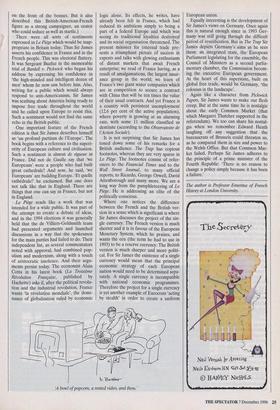 CHANGES IN THE SIR JAMES VERSION

for an opinion on two disputed texts

THE differences that exist between Sir James Goldsmith's book, Le Piege, pub- lished in Paris (1993), and his English ver- sion, The Trap, published first in 1994 were the subject of an exchange on this maga- zine's letters pages last week. Some simply find it curious that these differences exist. Others believe that if they are closely exam- ined they will reveal inconsistencies in Sir James's ideas. Or, assuming that the original French version represents his true beliefs, then the English edition has been adjusted in order to conceal certain of them. One has to accept that it is normal for any politician to take the opportunity of revising a book on the ever-evolving sub- ject of the European Union. It is natural too that if one were to examine the impor- tant speeches made by Sir James, from his lecture at the Sorbonne in October 1992 to his recent speeches in England, one would find changes in emphasis and in the use of detail.

But one must above all remember that when Sir James published the original French volume he was preparing for the elections to the European Parliament which took place in June 1994. It was an important moment. The French attitude towards the European Community was changing. In the late 1980s it was one of the countries most enthusiastic for Europe, with some 75 per cent of the population in its favour and the Euro-barometer for 1990 showing that 58 per cent wanted the cre- ation of a European government based in Brussels, responsible to a European Parlia- ment in Strasbourg. But after that support eroded. The referendum on the Maastricht treaty in 1992 barely scraped through, and the Euro-barometer for 1993 showed that only some 40 per cent thought France had benefited from membership. This was the moment to criticise the Community aggres- sively and boldly.

Sir James was remarkably successful. He was number two on a list headed by Philippe de Villiers, an aristocrat from the Vendee, with the grandson of de Gaulle as number three. This independent list, fight- ing for 'another Europe' and in competi- tion with the established political parties, won 12.4 per cent of the votes, which was highly respectable. (Le Monde depicted de Villiers driving a Rolls-Royce with the name Goldsmith on the number plate and .with a diminutive Sir James as the statuette on the front of the bonnet. But it also described this British-American-French figure as a strong campaigner, an orator who could seduce as well as startle.) There were all sorts of sentiments expressed in Le Piege which would be inap- propriate in Britain today. Thus Sir James asserts his confidence in France and in the French people. This was electoral flattery. It was Sergeant Buzfuz in the memorable trial of Bardell v. Pickwick who began his address by expressing his confidence in 'the high-minded and intelligent dozen of men' whom he now saw before him. Also, writing for a public which would always respond to anti-Americanism, Sir James was scathing about America being ready to impose free trade throughout the world and he called upon Europe to resist this. Such a sentiment would not find the same echo in the British public.

One important feature of the French edition is that Sir James describes himself as 'un profond partisan de l'Europe'. The book begins with a reference to the superi- ority of European culture and civilisation. Such a sentiment is almost de rigueur in France. Did not de Gaulle say that 'we Europeans' were a people who had built great cathedrals? And now, he said, 'we Europeans' are building Europe. 'Et quelle cathedrale !' he exclaimed. But one does not talk like that in England. There are things that one can say in France, but not in England.

Le Piege reads like a work that was intended for a wide public. It was part of the attempt to create a debate of ideas, and in the 1994 elections it was generally held that the de Villiers-Goldsmith team had presented arguments and launched discussions in a way that the spokesmen for the main parties had failed to do. Their independent list, as several commentators noted with approval, had combined pop- ulism and modernism, along with a touch of aristocratic insolence. And their argu- ments persist today. The economist Alain Cotta in his latest book (La Troisieme Revolution Fran caise, published by Hachette) asks if, after the political revolu- tion and the industrial revolution, France wants 'la revolution mondiale', the domi- nance of globalisation ruled by economic logic alone. Its effects, he writes, have already been felt in France, which had reduced its ambitions simply to being a part of a federal Europe and which was seeing its traditional loyalties destroyed and its social organisation threatened. The present minister for external trade pre- sents a triumphant picture of success in exports and talks with glowing enthusiasm of distant markets that await French enterprise; we read of France having, as a result of amalgamations, the largest insur- ance group in the world; we learn of France's two giant water companies which are in competition to secure a contract with China that will be ten times the value of their usual contracts. And yet France is a country with persistent unemployment (12.6 per cent of the active population), where poverty is growing at an alarming rate, with some 11 million classified as destitute (according to the Observatoire de l'Action Sociale).

It is not surprising that Sir James has toned down some of his remarks for a British audience. The Trap has copious footnotes, whereas they are very sparse in Le Piege. The footnotes consist of refer- ences to the Financial Times and to the Wall Street Journal, to many official reports, to Ricardo, George Orwell, David Attenborough and many more. We are a long way from the pamphleteering of Le Piege. He is addressing an elite of the politically conscious.

Where one notices the difference between the French and the British ver- sion in a sense which is significant is where Sir James discusses the project of the sin- gle currency. The French version is much shorter and it is in favour of the European Monetary System, which he praises, and wants the ecu (the term he had to use in 1993) to be a reserve currency. The British version is much sharper and more politi- cal. For Sir James the existence of a single currency would mean that the principal economic strategy of each European nation would need to be determined sepa- rately. A single currency is incompatible with national economic programmes. Therefore the project for a single currency is yet another example of Eurocrats 'acting by stealth' in order to create a uniform A bowl of popcorn, a rented video, and thou.' European union.

Equally interesting is the development of Sir James's views on Germany. Once again this is natural enough since in 1993 Ger- many was still going through the difficult period of reunification. But in The Trap Sir James depicts Germany's aims as he sees them: an integrated state, the European Parliament legislating for the ensemble, the Council of Ministers as a second parlia- mentary chamber, the Commission becom- ing the executive European government. At the heart of this superstate, built on global free trade, would be Germany, 'the colossus in the landscape'.

Again like a character from Pickwick Papers, Sir James wants to make our flesh creep. But at the same time he is nostalgic about the early Common Market (that which Margaret Thatcher supported in the referendum). We too can share his nostal- gia when we remember Edward Heath laughing off any suggestion that the bureaucrats of Brussels could threaten us, as he compared them in size and power to the Welsh Office. But that Common Mar- ket failed. Perhaps Sir James adheres to the principle of a prime minister of the Fourth Republic: 'There is no reason to change a policy simply because it has been a failure.'

The author is Professor Emeritus of French History at London University.