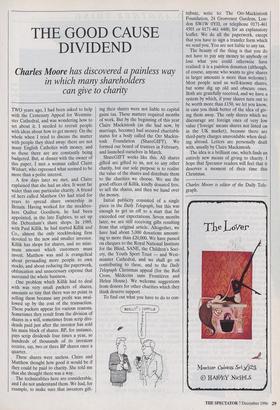 THE GOOD CAUSE DIVIDEND

TWO years ago, I had been asked to help with the Centenary Appeal for Westmin- ster Cathedral, and was wondering how to set about it. I needed to recruit people with ideas about how to get money. On the whole when I tried to discuss the matter with people they shied away: there are not many English Catholics with money, and so those there are are constantly being badgered. But, at dinner with the owner of this paper, I met a woman called Claire Wishart, who expressed what seemed to be more than a polite interest. A few days later we met, and Claire explained that she had an idea. It went far wider than one particular charity. A friend of hers called Matthew Orr had tried for years to spread share ownership in Britain. Having worked for the stockbro- kers Quilter Goodison, he had been appointed, in the late Eighties, to set up the Debenham's share shops. In 1989, with Paul Killik, he had started Killik and Co., almost the only stockbroking firm devoted to the new and smaller investor. Killik has shops for shares, and no mini- mum amount which customers must invest. Matthew was and is evangelical about persuading more people to own stocks, and about reducing the paperwork, obfuscation and unnecessary expense that surround the whole business.

One problem which Killik had to deal with was very small packets of shares, amounts so tiny that there was no point in selling them because any profit was swal- lowed up by the cost of the transaction. These packets appear for various reasons. Sometimes they result from the division of shares in a will, sometimes from scrip divi- dends paid just after the investor has sold his main block of shares. BP, for instance, pays scrip dividends four times a year, so hundreds of thousands of its investors receive, say, two or three BP shares once a quarter.

These shares were useless. Claire and Matthew thought how good it would be if they could be paid to charity. She told me that she thought there was a way.

The technicalities here are considerable, and I do not understand them. We had, for example, to make sure that investors gift- ing their shares were not liable to capital gains tax. These matters required months of work. But by the beginning of this year Claire Mackintosh (as she had now, by marriage, become) had secured charitable status for a body called the Orr Mackin- tosh Foundation (ShareGIFT). We formed our board of trustees in February, and launched ourselves in March.

ShareGIFT works like this. All shares gifted are gifted to us, not to any other charity, but our sole purpose is to realise the value of the shares and distribute them to the charities we choose. We use the good offices of Killik, kindly donated free, to sell the shares, and then we hand over the money.

Initial publicity consisted of a single piece in the Daily Telegraph, but this was enough to get us off to a start that far exceeded our expectations. Seven months later, we are still receiving gifts resulting from that original article. Altogether, we have had about 5,000 donations amount- ing to more than £20,000. We have passed on cheques to the Royal National Institute for the Blind, SANE, the Children's Soci- ety, the Youth Sport Trust — and West- minster Cathedral, and we shall go on contributing to these, and to the Daily Telegraph Christmas appeal (for the Red Cross, Medecins sans Fronti6res and Helen House). We welcome suggestions from donors for other charities which they think deserve support.

The beauty of the thing is that you do not have to pay any money to anybody or lose what you could otherwise have realised: it is a painless donation (although, of course, anyone who wants to give shares in larger amounts is more than welcome). Most people send us well-known shares, but some dig up old and obscure ones. Both are gratefully received, and we have a system by which, if your shares turn out to be worth more than £150, we let you know, in case you think better of the idea of giv- ing them away. The only shares which we discourage are foreign ones of very low value ('foreign' means shares not listed on in the UK market), because there are third-party charges unavoidable when deal- ing abroad. Letters are personally dealt with, usually by Claire Mackintosh.

The idea is a brilliant one, which finds an entirely new means of giving to charity. I hope that Spectator readers will feel that it deserves a moment of their time this Christmas.

Charles Moore is editor of the Daily Tele- graph.