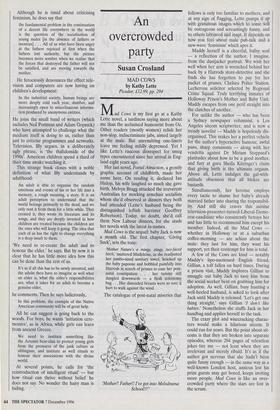 MAD COWS by Kathy Lette Picador, £12.99, pp. 294 Mad Cows is my first go at a Kathy Lette novel, a tardiness saying more about me than the acclaimed humourist from Oz. Other readers (mostly women) relish her non-stop, indiscriminate jabs, aimed largely at the male. But unremitting one-liners leave me feeling mildly depressed. Yet I like Lette's raucous disrespect for smug types encountered since her arrival in Eng- land eight years ago.

Her last novel, Foetal Attraction, a grossly graphic account of childbirth, made her name here. On reading it, declared Ian Hislop, his wife laughed so much she gave birth. Melvyn Bragg attacked the irreverent Australian for mocking armchair socialists whom she'd observed at dinners they both had attended (Lette's husband being the distinguished leftish barrister Geoffrey Robertson). Today, no doubt, she'd call them New Labour dinners, for she studs her novels with the latest in-names.

Mad Cows is the sequel: baby Jack is now a month old. The first chapter, 'Giving Suck', sets the tone:

Mother Nature's a mingy, stingy, two-faced bitch,' muttered Madeleine, as she readjusted her jumbo-sized sanitary towel, hoicked up the baby papoose and hobbled painfully into Harrods in search of prunes to ease her post- natal constipation . . . her tummy still dangled downwards — a flesh colostomy bag . . . Her distended breasts were so sore it hurt to walk against the wind...

The catalogue of post-natal miseries that 'Mother!! Father!! I've got into Melodrama School!!!" follows is only too familiar to mothers, and at any sign of flagging, Lette pumps it up with gratuitous images which to some will be outrageous and screamingly funny, and to others laboured and inapt. It depends on how you feel about male pub-talk and a new-wave 'feminism' which apes it.

Maddy herself is a cheerful, ballsy soul — a reflection of the author, I imagine, from the dustjacket portrait. We wish her well when her arm is wrenched behind her back by a Harrods store-detective and she finds she has forgotten to pay for her packet of prunes. Chelsea Police Station. Lecherous solicitor selected by Regional Crime Squad. Truly terrifying inmates of Holloway Prison's Mother and Baby Unit. Maddy escapes from one peril straight into the clutches of another.

For unlike the author — who has been a Sydney newspaper columnist, a Los Angeles sitcom scriptwriter, and is now a trendy novelist — Maddy is hopelessly dis- organised. This makes her a perfect vehicle for the author's hyperactive humour, awful puns, sharp comments — along with her vendetta against Dr Miriam Stoppard's platitudes about how to be a good mother, and fury at guru Sheila ICitzinger's claim that giving birth is the ultimate orgasm. Above all, Lette indulges the gal-with- attitude obsession that all blokes are bastards.

Simultaneously, her heroine employs every tactic to shame her baby's already married father into sharing the responsibil- ity. And still she craves this asinine television-presenter-turned-Liberal-Demo- crat-candidate who consistently betrays her and has little to recommend him except his member. Indeed, all the Mad Cows — whether in Holloway or at a suburban coffee-morning — are schizo about the male: they lust for him, they want his support, yet their contempt for him is total.

A few of the Cows are kind — notably Maddy's lipo-suctioned English friend, Gillian, a toff fallen on hard times. During a prison visit, Maddy implores Gillian to smuggle out baby Jack to save him from the social worker bent on grabbing him for adoption. As well, Gillian, busy hunting a well-heeled husband, is asked to look after Jack until Maddy is released. 'Let's get one thing straight,' says Gillian 'I don't like babies.' Nonetheless she stuffs Jack in her handbag and applies herself to the task.

The crazy plot and wisecracking charac- ters would make a hilarious sitcom. It could run for years. But the point about sit- coms is that they are broken into separate episodes, whereas 294 pages of relentless jokes tire me — not least when they are irrelevant and merely ribald. It's as if the author got nervous that she hadn't been quite funny enough — in the same way as a well-known London host, anxious lest his prize guests may get bored, keeps inviting more people. Mad Cows is like an over- crowded party where the stars are lost in the scrum.