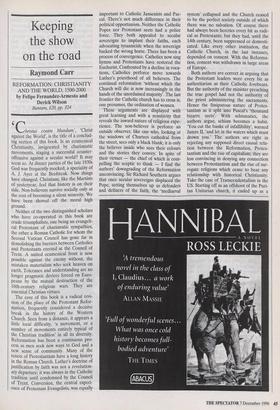 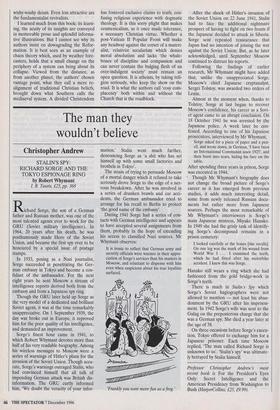 Keeping the show on the road

REFORMATION: CHRISTIANITY AND THE WORLD, 1500-2000 by Felipe Fernandez-Armesto and Derick Wilson Bantam, £20, pp. 324 hristus contra Mundum', 'Christ against the World', is the title of a conclud- ing section of this book. Is an ecumenical Christianity, invigorated by charismatic movements, staging a successful counter- offensive against a secular world? It may seem so. At dinner parties of the late 1930s God was frequently mocked, a speciality of A. J. Ayer at the Beefsteak. Now things have changed. Christians, like the Marxists of yesteryear, feel that history is on their side. Non-believers survive socially only at the cost of becoming a silent minority. We have been shoved off the moral high ground.

Neither of the two distinguished scholars who have co-operated in this book are crude triumphalists, one being an evangeli- cal Protestant of charismatic sympathies, the other a Roman Catholic for whom the Second Vatican Council has gone far in demolishing the barriers between Catholics and Protestants erected at the Council of Trent. A united ecumenical front is now possible against the enemy without, the mistaken materialists who seek heaven on earth. Tolerance and understanding are no longer pragmatic devices forced on Euro- peans by the mutual destruction of the loth-century religious wars. They are essential Christian virtues.

The core of this book is a radical revi- sion of the place of the Protestant Refor- mation, frequently considered a decisive break in the history of the Western Church. Seen from a distance, it appears a little local difficulty, 'a movement, or a number of movements entirely typical of the Christian tradition' in all its diversity. Reformation has been a continuous pro- cess as men seek new ways to God and a new sense of community. Many of the tenets of Protestantism have a long history in the Roman Church. Luther's doctrine of Justification by faith was not a revolution- ary departure; it was always in the Catholic tradition until condemned by the Council of Trent. Conversion, the central experi- ence of Protestant Evangelists, was equally 'C important to Catholic Jansenists and Pas- cal. There's not much difference in their political opportunism. Neither the Catholic Popes nor Protestant sects had a police force. They both appealed to secular sovereigns to implant their faiths, each advocating tyrannicide when the sovereign backed the wrong horse. There has been a process of convergence. Catholics now sing hymns and Protestants have restored the Eucharist. Confronted by a decline in voca- tions, Catholics perforce move towards Luther's priesthood of all believers. The continual reformation 'without which the Church will die is now increasingly in the hands of the unordained majority'. The last frontier the Catholic church has to cross is, one presumes, the ordination of women.

These arguments are displayed with great learning and with a sensitivity that reveals the inward nature of religious expe- rience. The non-believer is perforce an outside observer, like one who, looking at the windows of Chartres cathedral from the street, sees only a black blank; it is only the believer inside who sees their colours and the stories they convey. In spite of their virtues — the chief of which is com- pelling the sceptic to think — I find the authors' downgrading of the Reformation unconvincing. Sir Richard Southern argues that once secular sovereigns displaced the Pope, setting themselves up as defenders and definers of the faith, the 'mediaeval system' collapsed and the Church ceased to be the perfect society outside of which there was no salvation. Of course there had always been heretics every bit as radi- cal as Protestants; but they had, until the 14th century, been suppressed or domesti- cated. Like every other institution, the Catholic Church, in the last instance, depended on consent. With the Reforma- tion, consent was withdrawn in large areas of Europe.

Both authors are correct in arguing that the Protestant leaders were every bit as authoritarian as their Catholic forebears. But the authority of the minister preaching the true gospel had not the authority of the priest administering the sacraments. Hence the fissiparous nature of Protes- tantism as it split into Pascal's 'thousand bizarre sects'. With schismatics, the authors argue, schism becomes a habit. 'You cut the banks of infallibility', warned James II, 'and let in the waters which must drown you.' The authors are right in rejecting any supposed direct causal rela- tion between the Reformation, Protes- tantism and the rise of capitalism; they are less convincing in denying any connection between Protestantism and the rise of sur- rogate religions which cease to bear any relationship with historical Christianity. Take the case of Transcendentalism in the US. Starting off as an offshoot of the Puri- tan Unitarian church, it ended up as a wishy-washy deism. Even less attractive are the fundamentalist revivalists.

I learned much from this book; its learn- ing, the acuity of its insights are conveyed in memorable prose and splendid informa- tive illustrations. But I cannot see why its authors insist on downgrading the Refor- mation. It is best seen as an example of chaos theory which, used by weather fore- casters, holds that a small change on the periphery of a system can bring about its collapse. Viewed from the distance, as from another planet, the authors' chosen vantage point, what they call a mere re- alignment of traditional Christian beliefs, brought down what Southern calls the mediaeval system. A divided Christendom has fostered exclusive claims to truth, con- fusing religious experience with dogmatic theology. It is this sorry plight that makes ecumenicalism, as it once made tolerance, a necessary Christian virtue. Whether a post-Vatican II Popular Front will make any headway against the corset of a materi- alist, relativist secularism which denies moral absolutism and lacks 'the whale- bones of discipline and compassion and can never contain the bulging flesh of an over-indulgent society' must remain an open question. It is atheists, by taking reli- gion seriously, who keep the show on the road. It is what the authors call 'cosy com- placency' both within and without the Church that is the roadblock.