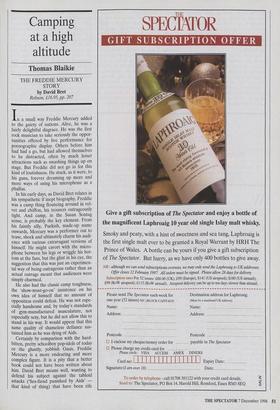 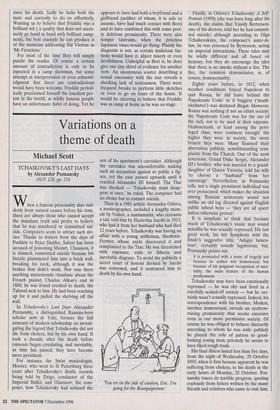 Camping at a high altitude

THE FREDDIE MERCURY STORY by David Bret Robson, £16.95, pp. 207 In a small way Freddie Mercury added to the gaiety of nations. Alive, he was a fairly delightful disgrace. He was the first rock musician to take seriously the oppor- tunities offered by live performance for pornographic display. Others before him had had a go, but had allowed themselves to be distracted, often by much lesser attractions such as smashing things up on stage. But Freddie did not go in for this kind of loutishness. He stuck, as it were, to his guns, forever dreaming up more and more ways of using his microphone as a phallus.

In his early days, as David Bret relates in his sympathetic if inept biography, Freddie was a camp thing flouncing around in vel- vet and chiffon, his trousers outrageously tight. And camp, in the Susan Sontag sense, is probably the key element. From his faintly silly, Puckish, made-up name onwards, Mercury was a performer out to tease, shock and ultimately charm his audi- ence with various extravagant versions of himself. He might cavort with the micro- phone between his legs or wriggle his bot- tom at the fans, but the glint in his eye, the suggestion that this was just an experimen- tal way of being outrageous rather than an actual outrage meant that audiences were simply charmed. He also had the classic camp toughness, the 'show-must-go-on' insistence on his own idea of himself that no amount of Opposition could defeat. He was not espe- cially handsome and, by today's standards of gym-manufactured musculature, not especially sexy, but he did not allow this to stand in his way. It would appear that this same quality of shameless defiance sus- tained him as he was dying of Aids.

. Certainly by comparison with the hard- bitten, pretty schoolboy pop-idols of today or the ghastly, yobbish Oasis, Freddie Mercury is a more endearing and more complex figure. It is a pity that a better book could not have been written about him. David Bret means well, wanting to defend his subject against the tabloid attacks ('Sex-fiend punished by Aids' — that kind of thing) that have been rife since his death. Sadly he lacks both the taste and curiosity to do so effectively. Wanting us to believe that Freddie was a brilliant wit ( a quality that does not neces- sarily go hand in hand with brilliant camp- ness), the best example he can produce is of the musician addressing Sid Vicious as 'Mr Ferocious'.

For most of the time Bret will simply puzzle the reader. Of course a certain amount of contradiction is only to be expected in a camp showman, but some attempt at interpretation or even acknowl- edgment that there are contradictions would have been welcome. Freddie period- ically proclaimed himself the loneliest per- son in the world, as wildly famous people have an unfortunate habit of doing. Yet he appears to have had both a boyfriend and a girlfriend (neither of whom, it is safe to assume, have had much contact with Bret) and to have combined this with some pret- ty delirious promiscuity. There were also temper tantrums, when the priceless Japanese vases would go flying. Plainly the diagnosis is not, as certain malicious fac- tions would have it, abject misery or even devilishness. Unhelpful as Bret is, he does give one tiny shred of evidence for another view. An anonymous source describing a sexual encounter with the star reveals a shocking lack of seriousness. There were frequent breaks to perform little sketches or even to go on tours of the house. It would be cheering to believe that Freddie was as camp at home as he was on stage.