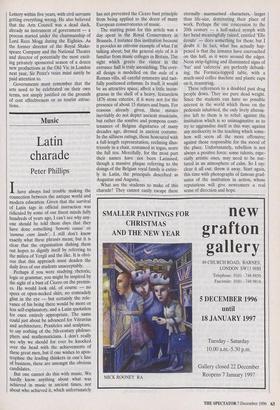 Ihave always had trouble making the connection between the antique world and modern education. Given that the survival of Latin tags in official instruction was ridiculed by some of our finest minds fully hundreds of years ago, I can't see why any- one should be told these days that they have done something lzonotis causa' or rsumma cum laude'. I still don't know exactly what these phrases mean; but it is clear that the organisation dishing them out hopes to dignify itself by referring to the milieu of Vergil and the like. It is obvi- ous that this approach must deaden the daily lives of our students unacceptably. Perhaps if you were studying rhetoric, logic or grammar, you might be inspired by the sight of a bust of Cicero on the premis- es. He would look old, of course — no specs or open-necked shirt, no comradely glint in the eye — but certainly the rele- vance of his being there would be more or less self-explanatory, and a Latin quotation for once entirely appropriate. The same could just about be advanced for Vitruvius and architecture, Praxiteles and sculpture, to say nothing of the 5th-century philoso- phers and mathematicians. I don't really see why we should for ever be knocked over the head with the achievements of these great men, but if one wishes to apos- trophise the leading thinkers in one's line of business, these are amongst the obvious candidates.

But one cannot do this with music. We hardly know anything about what was achieved in music in ancient times, nor about who achieved it, which unfortunately has not prevented the Cicero bust principle from being applied to the decor of many European conservatories of music.

The starting point for this article was a day spent in the Royal Conservatory in Brussels. I instance this institution because it provides an extreme example of what I'm talking about; but the general style of it is familiar from music colleges in Britain. The sight which greets the visitor in the entrance hall is truly astonishing. The over- all design is modelled on the aula of a Roman villa, all careful symmetry and tact- fully positioned columns. In itself, it would be an attractive space, albeit a little incon- gruous in the shell of a heavy, featureless 1876 stone exterior, if it were not for the presence of about 15 statues and busts. For reasons already given, these statues inevitably do not depict ancient musicians, but rather the sombre and pompous coun- tenances of Belgian dignitaries of many decades ago, dressed in ancient costume. In the silliness ratings, those honoured with a full-length representation, reclining illus- triously in a chair, costumed in togas, score the full ten. Mercifully, for the most part their names have not been Latinised, though a massive plaque referring to the doings of the Belgian royal family is entire- ly in Latin, the principals described as Augustus and Augusta.

What are the students to make of this charade? They cannot easily escape these eternally marmarised characters, larger than life-size, dominating their place of work. Perhaps the one concession to the 20th century — a half-naked nymph with her head meaningfully raised, entitled 'Elle ecoute' — does something for them; but I doubt it. In fact, what has actually hap- pened is that the inmates have encroached on this hall, as it were around the edges. Neon strip-lighting and illuminated signs of 'bar' and 'cafeteria' are perfectly debunk- ing; the Formica-topped table, with a much-used coffee machine and plastic cups on it, reassuring.

These references to a doubled past drag people down. They are pure dead weight. Since the students can have no possible interest in the world which those on the pedestals inhabited, the only lively alterna- tive left to them is to rebel: against the institution which is so unimaginative as to try to aggrandise itself in this way; against any mediocrity in the teaching which some- how will seem all the more offensive; against those responsible for the mood of the place. Unfortunately, rebellion is not always a positive force: some talents, espe- cially artistic ones, may need to be nur- tured in an atmosphere of calm. So I say: clear it all out; throw it away. Start again, this time with photographs of famous grad- uates of the institution in action, whose reputations will give newcomers a real sense of direction and hope.