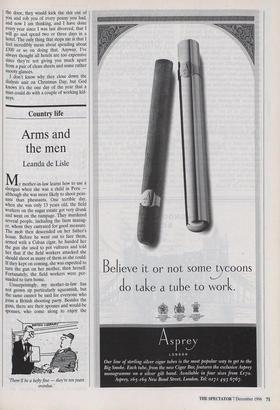 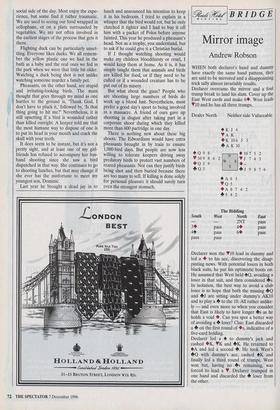 My mother-in-law learnt how to use a Shotgun when she was a child in Peru — although she was more likely to shoot peas- ants than pheasants. One terrible day, When she was only 13 years old, the field workers on the sugar estate got very drunk and went on the rampage. They murdered several people, including the farm manag- er, whom they castrated for good measure. The mob then descended on her father's house. Before he went out to face them, armed with a Cuban cigar, he handed her the gun she used to pot vultures and told her that if the field workers attacked she Should shoot as many of them as she could. If they kept on coming, she was expected to turn the gun on her mother, then herself. Fortunately, the field workers were per- suaded to turn home.

Unsurprisingly, my mother-in-law has not grown up particularly squeamish, but the same cannot be said for everyone who joins a British shooting party. Besides the guns, there are their spouses and would-be Spouses, who come along to enjoy the 'There'll be a hefty fine — they're ten years overdue.' social side of the day. Most enjoy the expe- rience, but some find it rather traumatic. We are used to seeing our food wrapped in cellophane, or on a plate surrounded by vegetables. We are not often involved in the earliest stages of the process that gets it there.

Plighting duck can be particularly unset- tling. Everyone likes ducks. We all remem- ber the yellow plastic one we had in the bath as a baby and the real ones we fed in the park when we were that little bit older. Watching a duck being shot is not unlike watching someone murder a family pet.

Pheasants, on the other hand, are stupid and irritating-looking birds. The main thought that goes through my mind as one hurtles to the ground is, 'Thank God, I don't have to pluck it,' followed by, 'Is that thing going to hit me?' Nevertheless, it is still upsetting if a bird is wounded rather than killed outright. A keeper told me that the most humane way to dispose of one is to put its head in your mouth and crack the skull with your teeth.

It does seem to be instant, but it's not a pretty sight, and at least one of my girl- friends has refused to accompany her hus- band shooting since she saw a bird dispatched in that way. She continues to go to shooting lunches, but that may change if she ever has the misfortune to meet my youngest son, Dominic.

Last year he brought a dead jay in to lunch and announced his intention to keep it in his bedroom. I tried to explain in a whisper that the bird would rot, but he only clutched it tighter and I had to buy it off him with a packet of Polos before anyone fainted. This year he produced a pheasant's head. Not as a trophy, you understand, but to ask if he could give it a Christian burial.

If I thought watching shooting would make my children bloodthirsty or cruel, I would keep them at home. As it is, it has simply taught them that animals and birds are killed for food, or if they need to be culled or if a wounded creature has to be put out of its misery.

But what about the guns? People who are shooting large numbers of birds do work up a blood lust. Nevertheless, most prefer a good day's sport to being involved in a massacre. A friend of ours gave up shooting in disgust after taking part in a corporate shoot during which they killed more than 600 partridge in one day.

There is nothing new about these big shoots. The Edwardians would have extra pheasants brought in by train to ensure 1,000-bird days. But people are now less willing to tolerate keepers driving away predatory birds to protect vast numbers of reared pheasants. Nor can they justify birds being shot and then buried because there are too many to sell. If killing is done solely for personal pleasure it should surely turn even the strongest stomach.