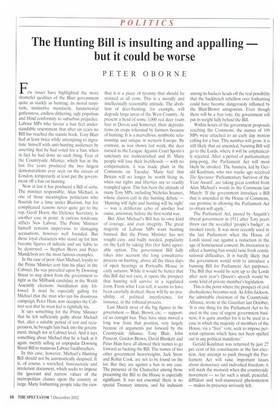 Few issues have highlighted the more shameful qualities of the Blair government quite as starkly as hunting: its moral turpitude, instinctive mendacity, fundamental gutlessness, endless dithering, ugly populism and blind conformity to suburban prejudice. Labour MPs who favour a ban feel understandable resentment that after six years no Bill has reached the statute book. Tony Blair lied at least twice while attempting to ingratiate himself with anti-hunting audiences by asserting that he had voted for a ban, when in fact he had done no such thing. Fear of the Countryside Alliance, which has in the last five years produced the two largest demonstrations ever seen on the streets of London, temporarily at least put the government off a ban on hunting.

Now at last it has produced a Bill of sorts. The minister responsible, Alun Michael, is one of those meaningless politicians who flourish for a time under Blairism, but for complicated reasons never quite get to the top. Geoff Hoon. the Defence Secretary, is another case in point. A curious syndrome afflicts New Labour. The Prime Minister himself remains impervious to damaging accusations, however well founded. But those loyal characters who stand up for him become figures of ridicule and are liable to be destroyed — Stephen Byers and Peter Mandelson are the most famous examples.

In the case of poor Alun Michael, loyalty to the Prime Minister cost him his place in the Cabinet. He was prevailed upon by Downing Street to step down from the government to fight as the Millbank candidate in the Welsh Assembly elections: humiliation duly followed. It must be especially galling for Michael that the man who ran his disastrous campaign. Peter Hain, now occupies the Cabinet seat that he must feel is rightfully his.

In this case. however, Michael's Hunting Bill should not be automatically despised. It is, of course, a wretched, bureaucratic and intolerant document, which seeks to impose the ignorant and narrow values of the metropolitan classes upon the country at large. Many foxhunting people take the view that it is a piece of tyranny that should be resisted at all costs. This is a morally and intellectually reasonable attitude. The abolition of deer-hunting, for example, will degrade large areas of the West Country. At present a herd of some 3,000 red deer roam free in Devon and Somerset. their depredations on crops tolerated by farmers because of hunting. It is a marvellous, symbiotic relationship and unique in western Europe. By contrast, as was shown last week, the deer nursed in the League Against Cruel Sports's sanctuary are malnourished and ill. Many people will lose their livelihoods — with no compensation, it was made plain in the Commons on Tuesday. Many feel that Britain will no longer be worth living in, when our rights and liberties are so readily trampled upon. This has been the attitude of many Tory MPs, including Nicholas Soames, whose clarion call in the hunting debate — 'Hunting will fight and hunting will be right' — was a deliberate echo of another lost cause, unionism, before the first world war.

But Alun Michael's Bill has its own kind of courage, and even integrity. The great majority of Labour MPs want hunting banned. But the Prime Minister has not sought easy, and badly needed, popularity on the Left by taking this (for him) agreeable option. The government Bill fully takes into account the long consultative process on hunting, above all the three days of open hearings in Portcullis House in early autumn. While it would be better that this Bill did not exist, it opens the prospect that hunting will survive in a regulated form. From what I can tell, it seems to have been carefully drafted; there will be no possibility of political interference, for instance, in the tribunal process.

Last March most of the big figures in the government — Blair, Brown, etc. — supported an outright ban. They have since moved a long way from that position, very largely because of arguments put forward by the Countryside Alliance. Tony Blair, John Prescott, Gordon Brown. David Blunkett and Peter HaM have all allowed their names to go forward as backing the Bill. The names of two other government heavyweights, Jack Straw and Robin Cook, are not to be found on the list. But they are against a ban in any case. The presence of the Chancellor among those presenting the Bill to the House is especially significant. It was not essential; there is no special Treasury interest, and his inclusion among its backers heads off the real possibility that the backbench rebellion over foxhunting could have become dangerously inflamed by the Blair/Brown antagonism. Even though there will be a free vote, the government will put its weight fully behind the Bill.

Within hours of the government proposals reaching the Commons, the names of 109 MPs were attached to an early day motion calling for a ban. This number will grow: it is still likely that an amended, banning Bill will go to the Lords, where it will be emphatically rejected. After a period of parliamentary ping-pong, the Parliament Act will most likely be invoked. The banners, led by Gerald Kaufman, who two weeks ago received The Spectator 'Parliamentary Survivor of the Year Award', are taking great comfort from Alun Michael's words in the Commons last March: 'If the government introduce a Bill that is amended in the House of Commons, our promise in allowing the Parliament Act to obtain will apply.'

The Parliament Act, passed by Asquith's liberal government in 1911 after Tory peers threw out the so-called 'people's budget', is invoked rarely. It was most recently used in the last Parliament when the House of Lords stood out against a reduction in the age of homosexual consent. Its invocation to effect a hunting ban would raise fresh constitutional difficulties. It is hardly likely that the government would wish to introduce a banning Bill for Parliament Act purposes. The Bill that would be sent up to the Lords after next year's Queen's speech would be some kind of private member's legislation.

This is the point where the prospect of civil disobedience becomes real. As John Jackson, the admirable chairman of the Countryside Alliance, wrote in the Guardian last October, 'It is one thing for the Parliament Act to be used in the case of urgent government business; it is quite another for it to be used in a case in which the majority of members of the House, via a "free" vote, seek to impose personal opinions which have not been spelled out in any political manifesto.'

Gerald Kaufman was returned by just 27 per cent of his constituents at the last election. Any attempt to push through the Parliament Act will raise important issues about democracy and individual freedom: it will mark the moment when the countryside movement — so far such a small, peaceful, diffident and well-mannered phenomenon — makes its presence seriously felt.