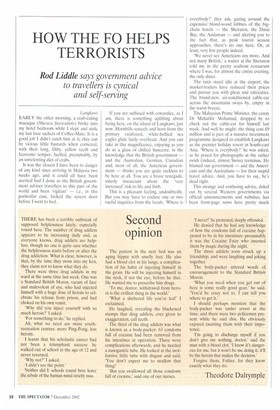 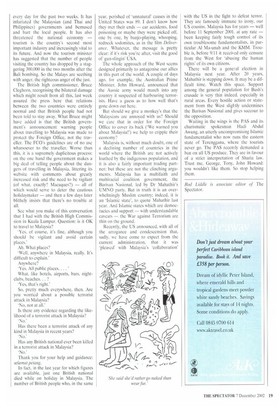 HOW THE FO HELPS TERRORISTS

to travellers is cynical and self-serving

Langkawi EARLY the other morning, a crab-eating macaque (Macaca fascicularis) broke into my hotel bedroom while I slept and stole my last four sachets of Coffee-Mate. It is a good job I didn't catch him at it; they can be vicious little bastards when cornered, with their long, filthy, yellow teeth and fearsome temper, fuelled, presumably, by an unrelenting diet of crabs.

It was the closest I have been to danger of any kind since arriving in Malaysia two weeks ago. and it could all have been averted had I done as the British government advises travellers to this part of the world and been 'vigilant' — i.e., in this particular case, locked the screen door before I went to bed. If you are suffused with cowardice, as I am, there is something uplifting about being here, on the island of Langkawi, just now. Hornbills screech and hoot from the primary rainforest, white-bellied sea eagles glide lazily overhead. And you can take in this magnificence, enjoying as you do so a glass of chilled Sancerre, in the knowledge that the British government — and the Australian, German, Canadian and, most of all, the American government — thinks you are quite reckless to be here at all. You are a brave renegade, utterly insouciant about the 'very increased' risk to life and limb.

This is a pleasant feeling, undoubtedly. But you may have to endure one or two rueful inquiries from the locals. 'Where is everybody?' they ask, gazing around the expensive blond-wood lobbies of the bigchain hotels — the Sheraton, the Datai Bay, the Andaman — and alerting you to the fact that, as peak tourist season approaches, there's no one here. Or, at least, very few people indeed.

We never see Americans any more. And not many British,' a waiter at the Sheraton told me in the pretty seafront restaurant where I was, for almost the entire evening, the only diner.

The taxis stand idle at the airport; the market-traders have reduced their prices and pursue you with pleas and entreaties. The brand-new, air-conditioned cable-car across the mountains sways by, empty in the warm breeze.

The Malaysian Prime Minister, the canny Dr Mahathir Mohamad, dropped by to check out the cable-car for himself last week. And well he might: the thing cost 19 million and is part of a massive investment programme designed to establish Langkawi as the premier holiday resort in South-east Asia. 'Where is everybody?' he was asked, as he posed for photographs at the rather swish (indeed, almost Swiss) terminus. He blamed our government — and the Americans and the Australians — for their stupid travel advice. And, you have to say, he's dead right.

This strange and confusing advice, doled out by several Western governments via official announcements and websites, has been front-page news here pretty much every day for the past two weeks. It has infuriated the Malaysian (and Thai and Philippines) governments and bemused and hurt the local people. It has also threatened the national economy — tourism is the country's second most important industry and increasingly vital to its future. And now the tourism minister has suggested that the number of people visiting the country has dropped by a staggering 300.000 in the two months after the Bali bombing. So the Malays are seething with anger, the righteous anger of the just.

The British high commissioner, Bruce Cleghorn, recognising the bilateral damage which might result from all this, last week assured the press here that relations between the two countries were entirely normal and that British people had not been told to stay away. What Bruce might have added is that the British government's announcement warning people about travelling to Malaysia was made to protect the Foreign Office, not the traveller. The PCO's guidelines are of no use whatsoever to the traveller. Worse than this, it is a supremely duplicitous process: on the one hand the government makes a big deal of telling people about the dangers of travelling in Malaysia, littering its website with comments about greatly increased risk and the need to be vigilant (of what, exactly? Macaques?) — all of which would serve to deter the cautious holidaymaker — and then a few days later blithely insists that there's no trouble at all.

See what you make of this conversation that I had with the British High Commission in Kuala Lumpur. Question: is it OK to travel to Malaysia?

'Yes, of course, it's fine, although you should be vigilant and avoid certain places.'

`Well, anywhere in Malaysia, really. It's difficult to explain.'

So, pretty much everywhere, then. Are you worried about a possible terrorist attack in Malaysia?

'No,' Has any British national ever been killed in a terrorist attack in Malaysia?

Thank you for your help and guidance: selamat petang.

In fact, in the last year for which figures are available, just one British national died while on holiday in Malaysia. The number of British people who, in the same

year, perished of 'unnatural' causes in the United States was 89. I don't know how they met their ends — car accidents, food poisoning or maybe they were picked off, one by one, by banjo-playing, whooping, redneck sodomites, as in the film Deliverance. Whatever, the message is pretty clear: if it's risk you're after, visit the good ol' gun-slingin' USA.

The whole approach of the West seems designed primarily to antagonise our allies in this part of the world. A couple of days ago, for example, the Australian Prime Minister, John Howard, announced that the Aussie army would march into any country it suspected of harbouring terrorists. Have a guess as to how well that's gone down out here.

But should we give a monkey's that the Malaysians are annoyed with us? Should we care that in order for the Foreign Office to cover its back ('We warned you about Malaysia!') we help to cripple their economy?

Malaysia is, without much doubt, one of a declining number of countries in the world where the British are not actively loathed by the indigenous population, and it is also a fairly important trading partner; but these are not the clinching arguments. Malaysia has a rnultifaith and multiracial coalition government, the Barisan Nasional, led by Dr Mahathir's UMNO party. But in truth it is an overwhelmingly Muslim country; indeed, it is an 'Islamic state', to quote Mahathir last year. And Islamic states which are democracies and support — with understandable caveats — the War against Terrorism are thin on the ground.

Recently, the US announced, with all of the arrogance and condescension that, sadly, we have come to expect from the current administration, that it was 'pleased' with Malaysia's 'collaboration' with the US in the fight to defeat terror. They are famously immune to irony, our US cousins. Malaysia has for years — well before 11 September 2001, at any rate — been keeping fairly tough control of its own troublesome fundamentalists, in particular Al Ma-unah and the K1V1114. Trouble is, before 9711 it received only censure from the West for 'abusing the human rights' of its own citizens.

There will be a general election in Malaysia next year. After 20 years, Mahathir is stepping down. It may be a difficult time. Watch this space. Support among the general population for Bush's crusade is very thin indeed, especially in rural areas. Every hostile action or statement from the West slightly undermines the Barisan Nasional and gives succour to the opposition.

Waiting in the wings is the PAS and its charismatic spokesman Hadi Abdul Awung, an utterly uncompromising Islamic fundamentalist who now runs the eastern state of Terengganu, where the tourists never go. The PAS recently demanded a ban on all US produce. They are in favour of a strict interpretation of Sharia law. Trust me, George, Tony, John Howard: you wouldn't like them. So stop helping them.