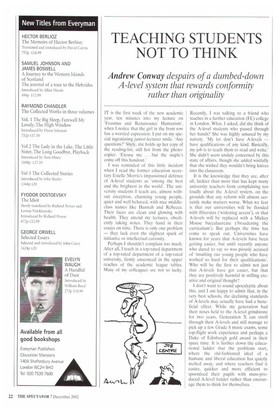 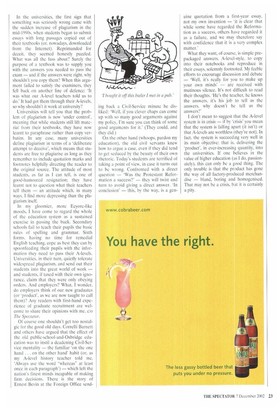 TEACHING STUDENTS NOT TO THINK

Andrew Conway despairs of a dumbed-down

A-level system that rewards conformity rather than originality

IT is the first week of the new academic year, ten minutes into my lecture on 'Erasmus and Renaissance Humanism', when I notice that the girl in the front row has a worried expression. I put on my special ingratiating junior-lecturer smile. 'Any questions?' Shyly, she holds up her copy of the reading-list, still hot from the photocopier. 'Excuse me . . but the staple's come off this handout.'

I was reminded of this little incident when I read the former education secretary Estelle Morris's impassioned defence of A-level students as 'among the best and the brightest in the world'. The university students I teach are, almost without exception. charming young people, quiet and well behaved, with nice middleclass names like Hannah and Rebecca. Their faces are clean and glowing with health. They attend my lectures, obediently taking notes. They hand in their essays on time. There is only one problem — they lack even the slightest spark of initiative or intellectual curiosity.

Recently, I was talking to a friend who teaches in a further education (FE) college in London. What, I asked, did she think of the A-level students who passed through her hands? She was highly amused by my naivety. 'My lot don't have A-levels — have qualifications of any kind. Basically, my job is to teach them to read and write.' She didn't seem unduly concerned by this state of affairs, though she added wistfully that she wished they wouldn't bring knives into the classroom.

It is the knowledge that they are, after all, luckier than most that has kept many university teachers from complaining too loudly about the A-level system, on the grounds that any reform will almost certainly make matters worse. What we fear is that our universities will be flooded with illiterates ('widening access'), or that A-levels will be replaced with a Mickey Mouse baccalaureate ('broadening the curriculum'). But perhaps the time has come to speak out. Universities have known for years that A-levels have been getting easier, but until recently anyone who dared to say so was piously accused of 'insulting our young people who have worked so hard for their qualifications'. Who will be the first to admit not just that A-levels have got easier, but that they are positively harmful in stifling creative and original thought?

I don't want to sound apocalyptic about this, and I am happy to admit that, in the very best schools, the declining standards of A-levels may actually have had a beneficial effect. While my generation had their noses held to the A-level grindstone for two years. Generation X can stroll through their A-levels and still manage to pick up a few Grade 8 music exams, some top-flight work experience and perhaps a Duke of Edinburgh gold award in their spare time. It is further down the educational ladder that the problems start, where the old-fashioned ideal of a humane and liberal education has quietly melted away, and where teachers find it easier, quicker and more efficient to spoonfeed their pupils with mass-produced A-level fodder rather than encourage them to think for themselves. In the universities, the first sign that something was seriously wrong came with the sudden increase of plagiarism in the mid-1990s, when students began to submit essays with long passages copied out of their textbooks (or, nowadays, downloaded from the Internet). Reprimanded for deceit, they seemed honestly puzzled. What was all the fuss about? Surely the purpose of a textbook was to supply you with the answers you needed to pass the exam — and if the answers were right, why shouldn't you copy them? When this argument failed to satisfy the examiners, they fell back on another line of defence: 'It was what our A-level teachers told us to do.' It had got them through their A-levels, so why shouldn't it work at university?

Universities will tell you that the problem of plagiarism is now 'under control', meaning that while students still lift material from their textbooks, they have now learnt to paraphrase rather than copy verbatim. In any case, many universities define plagiarism in terms of a 'deliberate attempt to deceive', which means that students are free to plagiarise as long as they remember to include quotation marks and footnotes helpfully directing the reader to the original source. The attitude of most students, as far as I can tell, is one of good-humoured resignation; they have learnt not to question what their teachers tell them — an attitude which, in many ways, I find more depressing than the plagiarism itself.

In my gloomier, more Eeyore-like moods, I have come to regard the whole of the education system as a sustained exercise in passing the buck. Secondary schools fail to teach their pupils the basic rules of spelling and grammar. Sixth forms. having no time for remedial English teaching, cope as best they can by spoonfeeding their pupils with the information they need to pass their A-levels. Universities, in their turn, quietly tolerate widespread plagiarism, and send out their students into the great world of work — and students, if taxed with their own ignorance, claim that they were only obeying orders. And employers? What, I wonder, do employers think of our new graduates (or 'product', as we are now taught to call them)? Any readers with first-hand experience of graduate recruitment are welcome to share their opinions with me, clo The Spectator.

Of course one shouldn't get too nostalgic for the good old days. Correlli Barnett and others have argued that the effect of the old public-school-and-Oxbridge education was to instil a deadening Civil-Ser vice mentality — the familiar 'on the one hand on the other hand' habit (or, as my A-level history teacher told me, 'Always use the word "whereas" at least once in each paragraph') — which left the nation's finest minds incapable of making firm decisions. There is the story of Ernest Bevin at the Foreign Office send ing back a Civil-Service minute he disliked: 'Well, if you clever chaps can come up with so many good arguments against my policy, I'm sure you can think of some good arguments for it.' (They could, and they did.) On the other hand (whoops, pardon my education), the old civil servants knew how to argue a case, even if they did tend to get seduced by the beauty of their own rhetoric. Today's students are terrified of taking a point of view, in case it turns out to be wrong. Confronted with a direct

question 'Was the Protestant Reformation a success?' — they will twist and turn to avoid giving a direct answer. 'In conclusion' — this, by the way, is a gen

uine quotation from a first-year essay, not my own invention — 'it is clear that while some have regarded the Reformation as a success, others have regarded it as a failure, and we may therefore say with confidence that it is a very complex matter.'

What they want, of course, is simple prepackaged answers, A-level-style, to copy into their notebooks and reproduce in their essays, solemnly footnoted. My feeble efforts to encourage discussion and debate — 'Well, it's really for you to make up your own minds' — are received with mutinous silence. It's not difficult to read their thoughts. 'He's the teacher, he knows the answers, it's his job to tell us the answers, why doesn't he tell us the answers?'

I don't mean to suggest that the A-level system is in crisis — if by 'crisis' you mean that the system is failing apart (it isn't) or that A-levels are worthless (they're not). In fact, the system is succeeding very well in its main objective: that is, delivering the 'product', in ever-increasing quantity, into the universities. If one believes in the value of higher education (as I do, passionately), this can only be a good thing. The only trouble is that the product has gone the way of all factory-produced merchandise — bland, boring and homogenised. That may not be a crisis, but it is certainly a pity.