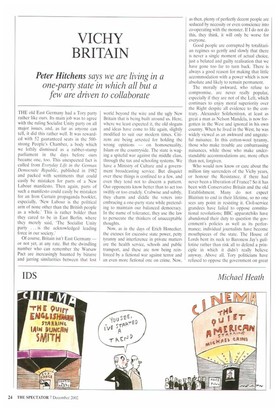 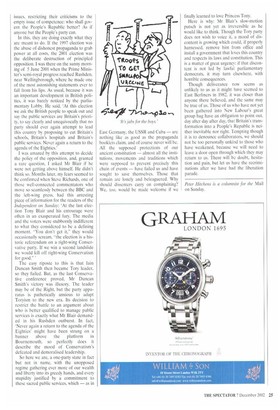 Peter Hitchens says we are living in a

THE old East Germany had a Tory party rather like ours. Its main job was to agree with the ruling Socialist Unity party on all major issues, and, as far as anyone can tell, it did this rather well. It was rewarded with 52 guaranteed seats in the 500strong People's Chamber, a body which we loftily dismissed as a rubber-stamp parliament in the days before ours became one, too. This unexpected fact is culled from Evetyday Life in the German Democratic Republic, published in 1982 and packed with sentiments that could easily he mistaken for parts of a New Labour manifesto. Then again, parts of such a manifesto could easily be mistaken for an Iron Curtain propaganda booklet, especially, 'New Labour is the political arm of none other than the British people as a whole.' This is rather bolder than they cared to be in East Berlin, where they merely said, 'The Socialist Unity party ... is the acknowledged leading force in our society.'

Of course, Britain isn't East Germany — or not yet, at any rate. But the dwindling number who can remember the Warsaw Pact are increasingly haunted by bizarre and jarring similarities between that lost world beyond the wire and the ugly New Britain that is being built around us. Here, where we least expected it, the old slogans and ideas have come to life again, slightly modified to suit our modern times. Citizens are being arrested for holding the wrong opinions — on homosexuality, Islam or the countryside. The state is waging a spiteful war against the middle class, through the tax and schooling systems. We have a Ministry of Culture and a government broadcasting service. But disquiet over these things is confined to a few, and even they tend not to discern a pattern. Our opponents know better than to act too swiftly or too crudely. Crabwise and subtly, they charm and diddle the voters into embracing a one-party state while pretending to maintain our balanced democracy. In the name of tolerance, they use the law to persecute the thinkers of unacceptable thoughts.

Now, as in the days of Erich Honecker, the excuses for excessive state power, petty tyranny and interference in private matters are the health service, schools and public transport, and these are now being reinforced by a fictional war against terror and an even more fictional one on crime. Now,

as then, plenty of perfectly decent people are seduced by necessity or even conscience into co-operating with the monster. If I do not do this, they think, it will only be worse for everyone.

Good people are corrupted by totalitarian regimes so gently and slowly that there is never a single moment of actual choice, just a belated and guilty realisation that we have gone too far to turn back. There is always a good reason for making that little accommodation with a power which is now absolute and likely to remain permanent.

The morally awkward, who refuse to compromise. are never really popular, especially if they are not of the Left, which continues to enjoy moral superiority over the Right despite all evidence to the contrary. Alexander Solzhenitsyn, at least as great a man as Nelson Mandela, is now forgotten in the West and ignored in his own country. When he lived in the West, he was widely viewed as an awkward and ungrateful nuisance. In this cotton-wool tyranny, those who make trouble are embarrassing nuisances, while those who make understandable accommodations are, more often than not, forgiven.

Who would now know or care about the million tiny surrenders of the Vichy years, or honour the Resistance, if there had never been a liberation of France? So it has been with Conservative Britain and the old Establishment. Many do not expect Blairism to end in their lifetime, so no one sees any point in resisting it. Civil-service grandees have failed to oppose constitutional revolutions; BBC apparatchiks have abandoned their duty to question the government's policies as well as its performance; individual journalists have become mouthpieces of the state. The House of Lords bent its neck to Baroness Jay's guillotine rather than risk all to defend a principle in which it didn't really believe anyway. Above all, Tory politicians have refused to oppose the government on great issues, restricting their criticisms to the empty issue of competence: who shall govern the People's Republic better? As if anyone but the People's party can.

In this, they are doing exactly what they are meant to do. If the 1997 election was the abuse of dishonest propaganda to grab power at all costs, the 2001 election was the deliberate destruction of principled opposition. I was there on the sunny morning of 5 June 2001 when the Prime Minister's semi-royal progress reached Rushden, near Wellingborough, where he made one

of the most astonishing statements ever to fall from his lips. As usual, because it was an important development in British poli tics, it was barely noticed by the parliamentary Lobby. He said, 'At this election we ask the British people to speak out and say the public services are Britain's priority, to say clearly and unequivocally that no party should ever again attempt to lead this country by proposing to cut Britain's schools, Britain's hospitals and Britain's public services. Never again a return to the agenda of the Eighties.'

I was amazed by this attempt to decide the policy of the opposition, and, granted a rare question, I asked Mr Blair if he were not getting above himself. He didn't think so. Months later, my fears seemed to be confirmed when Steve Richards, one of those well-connected commentators who move so seamlessly between the BBC and the left-wing press, had this arresting piece of information for the readers of the Independent on Sunday: 'At the last elec tion Tony Blair and his entourage were often in an exasperated fury. The media and the voters were stubbornly indifferent to what they considered to be a defining moment. 'You don't get it," they would occasionally scream, "the election is a his toric referendum on a right-wing Conservative party. If we win a second landslide we would kill off right-wing Conservatism for good." ' The easy riposte to this is that lain Duncan Smith then became Tory leader, so they failed. But, as the last Conserva tive conference proved, Mr Duncan Smith's victory was illusory. The leader may be of the Right, but the party appa ratus is pathetically anxious to adapt Toryism to the new era. Its decision to restrict the battle to an argument about who is better qualified to manage public services is exactly what Mr Blair demanded in his Rushclen outburst. In fact, 'Never again a return to the agenda of the Eighties' might have been strung on a banner above the platform in Bournemouth, so perfectly does it describe the mood of Conservatism's defeated and demoralised leadership.

So here we are, a one-party state in fact but not in name, with the unopposed regime gathering ever more of our wealth and liberty into its greedy hands, and every stupidity justified by a commitment to these sacred public services, which — as in

East Germany, the USSR and Cuba — are nothing like as good as the propaganda booklets claim, and of course never will be. All the supposed protections of our ancient constitution — almost all the institutions, movements and traditions which were supposed to prevent precisely this chain of events — have failed us and have sought to save themselves. Those that remain are lonely and beleaguered. Why should dissenters carry on complaining? We, too, would be made welcome if we

Here is why: Mr Blair's slow-motion putsch is not yet as irreversible as he would like to think. Though the Tory party does not wish to voice it, a mood of discontent is growing which could, if properly harnessed, remove him from office and install a government that loves this country and respects its laws and constitution. This is a matter of great urgency: if that discontent is not led by lawful parliamentary democrats, it may turn elsewhere, with horrible consequences.

Though deliverance now seems as unlikely to us as it might have seemed to East Berliners in 1982, it was closer than anyone there believed, and the same may be true of us. Those of us who have not yet been gathered into New Labour's great group hug have an obligation to point out, day after day after day, that Britain's transformation into a People's Republic is neither inevitable nor right. Tempting though it is to denounce collaborators, we should not be too personally unkind to those who have weakened, because we will need to leave a door open through which they may return to us. There will be doubt, hesitation and pain, but let us have the recriminations after we have had the liberation parade.

Peter Hitchens is a columnist for the Mail on Sunday.