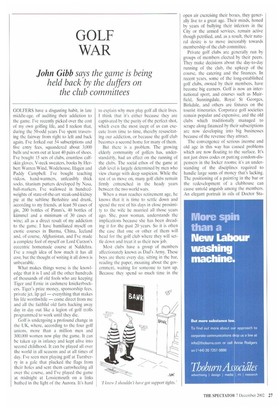 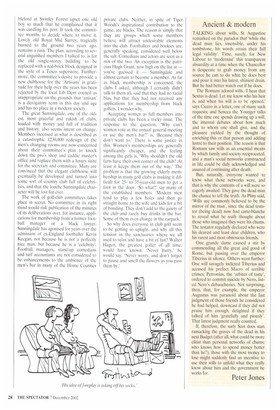 John Gibb says the game is being

held back by the duffers on the club committees

GOLFERS have a disgusting habit, in late middle-age, of auditing their addiction to the game. I've recently picked over the cost of my own golfing life, and I reckon that, during the 50-odd years I've spent traversing the fairway from right to left and back again, I've forked out 54 subscriptions and five entry fees, squandered about 3,000 balls and worn out at least 40 pairs of shoes. I've bought I5 sets of clubs, countless calfskin gloves, V-neck sweaters, books by Herbert Warren Wind, Wodehouse, Hagen and Paddy Campbell. I've bought teaching videos, hand-warmers, unfeasibly thick socks, titanium putters developed by Nasa, ball-markers. I've wallowed in hundredweights of state-of-the-art steak-and-kidney pie at the sublime Berkshire and drunk, according to my friends, at least 50 cases of gin, 200 bottles of Pimm's, 40 bottles of ktimmel and a minimum of 30 cases of wine; all as a direct result of my addiction to the game. I have humiliated myself on exotic courses in Burma, China, Iceland and, of course, Afghanistan, and I've made a complete fool of myself on Lord Curzon's eccentric homemade course at Naldehra. I've a rough idea of how much it has all cost, but the thought of writing it all down is unbearable.

What makes things worse is the knowledge that it is I and all the other hundreds of thousands of old fools who are keeping Tiger and Ernie in cashmere knickerbockers. Tiger's prize money, sponsorship fees, private jet, lip gel — everything that makes his life worthwhile — come direct from me and all the faithful old farts hacking away day in day out like a legion of golf trolls programmed to work until they die.

Golf is undergoing a profound change in the UK, where, according to the four golf unions, more than a million men and 300,000 women now play the game. It can be taken up in infancy and kept alive into second childhood. It can be played all over the world in all seasons and at all times of day. I've seen men playing golf at Turnberry in a gale that plucked the flags from their holes and sent them cartwheeling all over the course, and I've played the game at midnight at Lossiemouth on a links bathed in the light of the Aurora. It's hard to explain why men play golf all their lives. I think that it's either because they are captivated by the purity of the perfect shot, which even the most inept of us can execute from time to time, thereby resuscitating our addiction, or because the golf club becomes a second home for many of them.

But there is a problem. The growing elderly community of golfers has, understandably, had an effect on the running of the clubs. The social ethos of the game at club level is largely determined by men who view change with deep suspicion. While the rest of us move on, many golf clubs remain firmly entrenched in the heady years between the two world wars.

When a man reaches retirement age, he knows that it is time to settle down and spend the rest of his days in close proximity to the wife he married all those years ago. She, poor woman, understands the implications because she has been dreading it for the past 20 years. So it is often the case that one or other of them will head for the golf club where they will settle down and treat it as their new job.

Most clubs have a group of members affectionately known as Dad's Army. These boys are there every day, sitting in the bar, reading the paper, moaning about the government, waiting for someone to turn up. Because they spend so much time in the open air exercising their bones, they generally live to a great age. Their minds, honed by years of bullying their inferiors in the City or the armed services, remain active though petrified, and, as a result, their natural desire is to move inexorably towards membership of the club committee.

Private golf clubs are generally run by groups of members elected by their peers. They make decisions about the day-to-day running of the club, the upkeep of the course, the catering and the finances. In recent years, some of the long-established golf clubs, owned by their members, have become big earners. Golf is now an international sport, and courses such as Muirfield, Sunningdale, Royal St Georges, Birkdale, and others are fixtures on the tourist itineraries. Corporate golf societies remain popular and expensive, and the old clubs which traditionally managed to scrape along financed by their subscriptions are now developing into big businesses because of the revenue they attract.

The convergence of serious income and old age in this way has caused problems which are now floating to the surface. It's not just dress codes or putting condom-dispensers in the locker rooms; it's an understanding of the disciplines required to handle large sums of money that's lacking. The positioning of a painting in the bar or the redevelopment of a clubhouse can cause untold anguish among the members. An elegant portrait in oils of Doctor Sta bleford at Swinley Forest upset one old boy so much that he complained that it was curdling his port. It took the committee months to decide where to move it. Lovely old Royal Mid Surrey, tragically burned to the ground two years ago, remains a ruin. The plan, according to several anguished members I talked to, is for the old single-storey building to be replaced with a red-brick block designed in the style of a Tesco superstore. Furthermore, the committee's desire to provide a new clubhouse for the 'Artisans' in gratitude for their help over the years has been rejected by the local Lib Dem council as inappropriate on the grounds that 'artisan' is a derogatory term in this day and age and has no place in a modern society.

The great Sunningdale, one of the oldest, most graceful and rakish of clubs, loaded with money and full of tradition and history, also seems intent on change. Members incensed at what is described as a catastrophic £230,000 redesign of the men's changing rooms are now concerned about their committee's plan to knock down the pro's shop and caddie master's office and replace them with a luxury suite for the secretary and committee. Many are convinced that the elegant clubhouse will eventually be developed and turned into some sort of country club full of celebrities, and that the louche Sunningdale character will be lost for ever.

The work of golf-club committees takes place in secret. No committee in its right mind would risk publication of the minutes of its deliberations over, for instance, applications for membership from a former football manager or a black lawyer. Sunningdale has agonised for years over the admission of ex-England footballer Kevin Keegan, not because he is not a perfectly nice man, but because he is a 'celebrity'. Football managers, stand-up comedians and turf accountants are not considered to be enhancements to the ambience of the men's bar in many of the Home Counties private clubs. Neither, in spite of Tiger Woods's inspirational contribution to the game, are blacks. The reason is simply that they are groups which some members believe will attract undesirable elements into the club. Footballers and bookies are, generally speaking. considered well below the salt. Comedians and actors are seen as a mix of the two. An exception is the patrician Hugh Grant. now high on the list at — you've guessed it — Sunningdale and almost certain to become a member. As far as black membership is concerned, the clubs I asked, although I certainly didn't talk to them all, said that they had no racial bias, but that they had not received any applications for membership from black golfers. I wonder why.

Accepting women as full members into private clubs has been a tricky issue. The response to the question, 'Why can't women vote at the annual general meeting or use the men's bar?' is, 'Because they don't want to.' There is some justice in this. Women's memberships are generally significantly cheaper, and the feeling among the girls is, 'Why shouldn't the old farts have their own corner of the club? At least it keeps them out of the way.' The problem is that the growing elderly membership in many golf clubs is making it difficult for 25to 35-year-old men to get a foot in the door. 'So what?' say many of the established members. 'Modern men tend to play a few holes and then go straight home to the wife and kids for a bit of bonding. They don't add to the gaiety of the club and rarely buy drinks in the bar. Some of them even change in the carpark.'

So why does everyone in club golf seem to be getting so uptight, and why all this tension in the sanctuaries where we all used to relax and have a bit of fun? Walter Hagen, the greatest golfer of all time. would have known. 'Never hurry,' he would say. 'Never worry, and don't forget to pause and smell the flowers as you pass them by.'