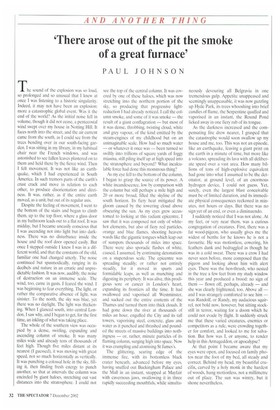 The sound of the explosion was so loud, so prolonged and so unusual that I knew at once I was listening to a historic singularity. Indeed, it may not have been an explosion: more a catastrophic global event. Was it the end of the world? As the initial noise fell in volume, though it did not cease, a pentecostal wind swept over my house in Notting Hill. It faces north into the street, and the air current came from the south, as I could see from the trees bending over in our south-facing garden. I was sitting in my library, in my habitual chair near the French windows, and was astonished to see fallen leaves plastered on to them and held there by the fierce wind. Then I felt movement. It was not like an earthquake, which I had experienced in South Arnerica. In such tremors parts of the earth's crust crack and move in relation to each other, to produce disorientation and dizziness. It was, rather, as if the entire earth moved, as a unit, but out of its regular axis.

Despite the feeling of movement. I went to the bottom of the stairs and began to climb them, up to the top floor, where a glass door in my bathroom leads out to a flat roof. It was midday, but I became uneasily conscious that I was ascending not into light but into darkness. There was no disturbance inside the house and the roof door opened easily. But once I stepped outside I knew I was in a different world, and that the constants of the old, familiar one had changed utterly. The noise continued but spasmodically, ranging in its decibels and nature in an erratic and unpredictable fashion. It was now, audibly, the noise of destruction on an immense scale. The wind, too, came in gusts. I feared the wind. I was beginning to fear everything. The light, or rather the comparative absence of light, was sinister. To the north, the sky was blue, yet there was no daylight. The light was thickening. When I glanced south, into central London, I saw why, and I began to get, for the first time, an inkling of what was taking place.

The whole of the southern view was occupied by a dense, swirling, expanding and ascending column of smoke. It was many miles wide and already tens of thousands of feet high. Though five miles distant at its nearest (I guessed), it was moving with great speed, not so much horizontally as vertically. It was punching a colossal hole in the sky, filling it, then finding fresh energy to punch another, so that at intervals the column was encircled by giant haloes, stretching out vast distances into the stratosphere. I could not see the top of the central column. It was covered by one of these haloes, which was now stretching into the northern portion of the sky, so producing that progressive lightreduction I had already noticed. I call the column smoke, and some of it was smoke — the result of a giant conflagration — but most of it was dense, throbbing, twisting cloud, white and grey vapour, of the kind emitted by the steam-engines of my childhood but on an unimaginable scale. How had so much water — or whatever it once was — been turned so swiftly into trillions of square yards of foggy miasma, still piling itself up at high speed into the stratosphere and beyond? What incalculable force had done this monstrous thing?

As my eye fell to the bottom of the column, I began to grasp the source of its power. A white incandescence, low by comparison with the column but still perhaps a mile high and 20 or more broad, filled the skyline of the south horizon. Its fiery heat mitigated the gloom caused by the towering cloud above obscuring the sun. As my eyes grew accustomed to looking at this radiant epicentre, I saw that it was composed not only of whitehot elements, but also of fiery red particles, orange and blue flames, shooting heavenwards like the gigantic tongues which leap out of sunspots thousands of miles into space. There were also sporadic flashes of white, caused, I assumed, by continuing detonations on a stupendous scale. The epicentre was spreading steadily; or rather not entirely steadily, for it moved in spurts and formidable leaps, as well as munching and digesting its periphery. It was alive, this prodigious sore or cancer in London's heart, expanding its frontiers all the time. It had swallowed and vaporised all Westminster, and sucked out the entire contents of the Thames and turned them into thick clouds. It had gone down the river at thousands of miles an hour, engulfed the City and its tall towers. vaporising steel, concrete, glass and water as it punched and thrashed and pounded the streets of massive buildings into nothingness — or. rather, minute particles of its flaming column, surging high into space. Now it was crumpling and atomising St James's.

The glittering, searing edge of the immense fire, with its bottomless black crater beneath, advanced before my eyes, having snuffed out Buckingham Palace and the Mall in an instant, snapped at Mayfair with cavernous jaws, swallowing it in three rapidly succeeding mouthfuls, while simulta

neously devouring all Belgravia in one tremendous gulp. Appetite unappeased and seemingly unappeasable, it was now guzzling up Hyde Park, its trees whooshing into brief candles of flame. the Serpentine quaffed and vaporised in an instant, the Round Pond licked away in one fiery rub of its tongue.

As the darkness increased and the compensating fire drew nearer, I grasped that the catastrophe would soon swallow up my house and me, too. This was not an episode, like an earthquake, leaving a giant print on the earth in a minute of time, but more like a volcano, spreading its lava with all deliberate speed over a vast area. How many billions of tons of high-explosive equivalent had gone into what I assumed to be the detonator, at ground level, of an enormous hydrogen device, I could not guess. Yet, surely, even the largest blast conceivable must be of limited duration, and its immediate physical consequences reckoned in minutes, not hours or days, But there was no sign yet of an end, or even a diminuendo.

I suddenly noticed that I was not alone. At my feet, or very near them, was a curious congregation of creatures. First, there was a fat wood-pigeon, who usually gives me the widest of berths for he knows he is not a favourite. He was motionless, cowering, his feathers dank and bedraggled as though he was in a cold sweat. There was a crow I had never seen before, more composed than the pigeon and looking about him with alert eyes. There was the hen-thrush, who nested in the tree a few feet from my study window this year and produced a brood: no sign of them — flown off, perhaps, already — and she was clearly frightened, too, Above all — and I was strangely comforted to see him — was Randolf, or Randy, my audacious squirrel, not bold now, however, but sitting stockstill in terror, waiting for a doom which he could not evade by flight. It suddenly struck me that these varied creatures, enemies or competitors as a rule, were crowding together for comfort, and looked to me for salvation. But how was I, or anyone, to render help in this Armageddon, or apocalypse?

At that point I became aware that my eyes were open, and focused on family photos near the foot of my bed, all steady and correct. Behind my head, my beautiful crucifix, carved by a holy monk in the hardest of woods, hung motionless, not a millimetre out of place. The sun was wintry, but it shone nevertheless.