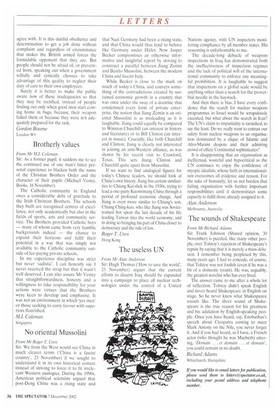 From Mr Roger T. Uren Sir: We from the West would see China in much clearer terms (`China is a fascist country', 23 November) if we sought to understand it in its own historical context instead of striving to force it to fit irrelevant Western analogies. During the 1990s, American political scientists argued that post-Deng China was a rising state and that Nazi Germany had been a rising state, and that China would thus tend to behave like Germany under Hitler. Now Jasper Becker compromises an otherwise informative and insightful report by striving to construct a parallel between Jiang Zemin and Benito Mussolini, between the modern China and fascist Italy.

While Becker is close to the mark on much of today's China, and conveys something of the contradictions created by sustained economic growth in a country that was once under the sway of a doctrine that condemned every form of private enterprise, the notion that Jiang Zemin is an oriental Mussolini is as misleading as it is laughable. Jiang could equally be compared to Winston Churchill (an interest in history and literature) or to Bill Clinton (an interest in music). Crucially, like both Churchill and Clinton, Jiang is clearly not interested in joining an anti-Western alliance, as was shown by his recent visit to Crawford, Texas. This sets Jiang, Clinton and Churchill quite apart from Mussolini.

If we want to find analogical figures for today's Chinese leaders, we should look at China's own history. Jiang has certain similarities to Chiang Kai-shek in the 1930s, trying to lead a one-party Kuomintang China through a period of profound economic change. And Jiang is even more similar to Chiang's son, Chiang Ching-kuo, who like Jiang was Soviettrained but spent the last decade of his life leading Taiwan into the world economy, and in doing so bringing his part of China closer to democracy and the rule of law.