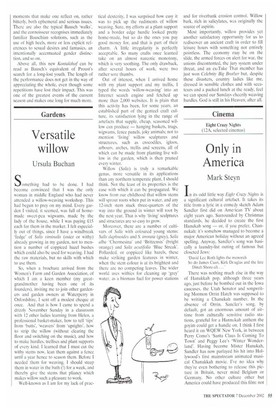 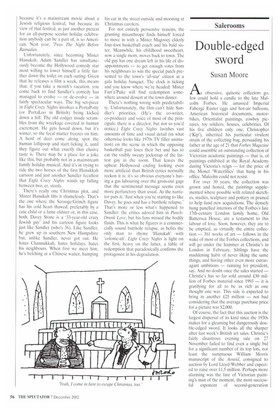 In its odd little way Eight Crazy Nights is a significant cultural artefact. It takes its title from a lyric in a comedy sketch Adam Sandier first did on American TV about eight years ago. Surrounded by Christmas standards, he decided to create the first Hanukah song or, if you prefer, Channukah: it's somehow managed to become a major American holiday without an agreed spelling. Anyway, Sandler's song was basically a laundry-list outing of famous but closeted Jews:

There was nothing much else in the way of Hanukkah pop, although three years ago, just before he bombed out in the Iowa caucuses, the Utah Senator and songwriting Mormon Orrin Hatch was supposed to be writing a Chanukah number. In the absence of Orrin. Sander's song, by default, got an enormous amount of airtime from culturally sensitive radio stations, grateful for a Hannukah anthem the goyim could get a handle on. I think I first heard it on WQEW New York, in between Perry Como's 'Santa Claus Is Coming To Town' and Peggy Lee's 'Winter Wonderland'. Having become Mister Hanukah, Sandler has now parlayed his hit into Hollywood's first mainstream animated musical Chanukkah movie. I've no idea why they're even bothering to release this picture in Britain, never mind Belgium or Germany. No other culture other but America could have produced this film: not because it's a mainstream movie about a Jewish religious festival, but because its view of that festival, as just another pretext for an all-purpose secular holiday celebration anybody can be a part of, is so American. Next year, 'Twas The Night Before Ramadan.

Unfortunately, since becoming Mister Hanukah, Adam Sandler has simultaneously become the Hollywood comedy star most willing to lower himself a little further down the toilet on each outing. Given that he releases a film a week, this means that, if you take a month's vacation, you come back to find Sandler's comedy has managed to evolve — or de-evolve — in fairly spectacular ways. The big set-piece in Eight Crazy Nights involves a PortaPotty (or PortaLoo in British) being kicked down a hill. The old codger inside scrambles from the wreckage covered in human excrement. He gets hosed down, but it's winter, so the fecal matter freezes on him. A herd of deer come along, spot the human lollipoop and start licking it, until they figure out what exactly that elusive taste is. There may be a place for a joke like this, but probably not in a mainstream family holiday musical. And it's in trying to ride the two horses of the first Hanukkah cartoon and just another Sandler feealfest that Eight Crazy Nights winds up falling between two. er, stools.

There's really one Christmas plot, and Mister Hanukah lifts it shamelessly. That's the one where the Scrooge/Grinch figure has his cold heart thawed, preferably by a cute child or a lame oldster or, in this case, both. Davey Stone is a '33-year-old crazy Jewish guy' and his cartoon figure looks just like Sandler (who's 36). Like Sandler. he grew up in southern New Hampshire but, unlike Sandler, never got out. He hates Channukkah, hates holidays, hates his neighbours. When first we meet him, he's belching at a Chinese waiter, humping his car in the street outside and mooning at Christmas carolers.

For not entirely persuasive reasons, the grunting misanthrope finds himself forced to move in with a Mister Magooey elderly four-foot basketball coach and his bald sister. Meanwhile, his childhood sweetheart. now a single mom, moves back to town. The old guy has one dream left in his life of disappointments — to get enough votes from his neighbours to win the special patch presented to the town's 'all-star' citizen at a gala holiday banquet. The clock is ticking and you know where we're headed: Mister Fart'n'Puke will find redemption somewhere around dessert at the town dinner.

There's nothing wrong with predictability. Unfortunately, the film can't hide Sandler's priorities. (He's the co-writer, co-producer and voice of most of the principals: there is a director, but not so you'd notice.) Eight Crazy Nights lavishes vast amounts of time and visual detail (in what otherwise looks like 1970s TV filler animation) on the scene in which the opposing basketball pair loses their bet and has to eat the visibly sweaty jockstrap of the fattest guy in the room. That leaves the upbeat Hollywood ending looking even more artificial than British cynics normally reckon it is: it's so obvious everyone's having a gas labouring over the gross-out gags that the sentimental message seems even more perfunctory than usual. As the narrator puts it, 'Just when you're starting to like Davey, he goes and has a butthole relapse.' That's more or less what's happened to Sandler: the critics adored him in PunchDrunk Love, but his fans missed the bodily fluids. This is what he figures is a commercially sound butthole relapse, as befits the only man to rhyme 'Hanukah' with `colonic-ah'. Eight Crazy Nights is light on the first, heavy on the latter, a fable of redemption that paradoxically confirms the protagonist in his degradation.