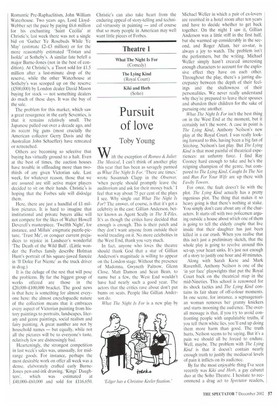 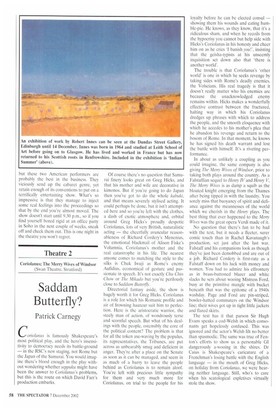 With the exception of Romeo & Juliet: The Musical, I can't think of another play this year that has been as savagely panned as What The Night Is For. 'There are times,' wrote Susannah Clapp in the Observer, 'when people should promptly leave the auditorium and ask for their money back.' I feel that way about 75 per cent of the plays I see. Why single out What The Night Is For? The answer, of course, is that it's got a celebrity in the cast: Gillian Anderson, better known as Agent Scully in The X-Files. It's as though the critics have decided that enough is enough. This is their patch and they don't want anyone from outside their world treading on it. No more celebrities in the West End, thank you very much.

In fact, anyone who loves the theatre should thank God that a star of Gillian Anderson's magnitude is willing to appear on the London stage. Without the presence of Madonna, Gwyneth Paltrow, Glenn Close, Matt Damon and Sean Bean, to name but a few, the West End wouldn't have had nearly such a good year. The actors that the critics rave about don't put bums on seats. People like Gillian Anderson do.

What The Night Is For is a new play by Michael Weller in which a pair of ex-lovers are reunited in a hotel room after ten years and have to decide whether to get back together. On the night I saw it, Gillian Anderson was a little stiff in the first half, but she warmed up considerably in the second, and Roger Allam, her co-star, is always a joy to watch. The problem isn't the performers, but the writing. Michael Weller simply hasn't created interesting enough characters to account for the explosive effect they have on each other. Throughout the play, there's a jarring discrepancy between the depth of their feelings and the shallowness of their personalities. We never really understand why they're prepared to leave their spouses and abandon their children for the sake of pursuing one another.

What The Night Is For isn't the best thing on in the West End at the moment, but it certainly isn't the worst. A case in point is The Lying Kind, Anthony Neilson's new play at the Royal Court. I was really looking forward to this, having been a big fan of Stitching, Neilson's last play. But The Lying Kind is that most painful of theatrical experiences: an unfunny farce. I find Ray Cooney hard enough to take and he's the reigning champion of the genre, but compared to The Lying Kind, Caught In The Net and Run For Your Wife are up there with Fawlty Towers.

For once. the fault doesn't lie with the plot. The Lying Kind actually has a pretty ingenious plot. The thing that makes it so heary going is that there's nothing at stake. You simply don't care about any of the characters. It starts off with two policemen arguing outside a house about which one of them is going to tell the elderly couple that live inside that their daughter has just been killed in a car crash. When you realise that this isn't just a preliminary sketch, that the whole play is going to revolve around this set-up, your heart sinks. It's just not enough of a story to justify one hour and 40 minutes.

Along with Sarah Kane and Mark Ravenhill, Anthony Neilson is one of the 'in yer face' playwrights that put the Royal Court back on the theatrical map in the mid-Nineties. This school is renowned for its shock tactics and The Lying Kind contains its fair share of off-colour moments. In one scene, for instance, a septuagenarian woman removes her granny knickers and starts mooning the audience. The overall message is that, if you try to avoid confronting people with unpalatable truths, if you tell them white lies, you'll end up doing them more harm than good. The truth hurts, Neilson seems to be saying. But it's a pain we should all be forced to endure. Well. maybe. The problem with The Lying Kind is that it doesn't contain nearly enough truth to justify the mediaeval levels of pain it inflicts on its audience.

By far the most enjoyable thing I've seen recently was Kiki and Herb, a gay cabaret duo at the Soho Theatre. I hesitate to recommend a drag act to Spectator readers, but these two American performers are probably the best in the business. They viciously send up the cabaret genre, yet retain enough of its conventions to put on a terrifically entertaining show. What's so impressive is that they manage to inject some real feelings into the proceedings so that by the end you're almost moved. The show doesn't start until 9.30 p.m., so if you find yourself bored rigid at an office party in Soho in the next couple of weeks, sneak off and check them out. This is one night in the theatre you won't regret.