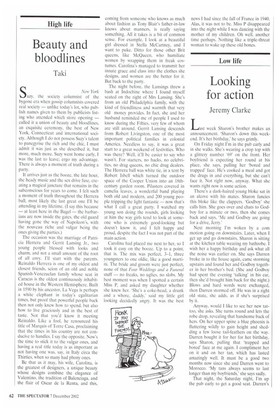 uzy, the society columnist of the bygone era when gossip columnists covered real society — unlike today's lot, who publish names given to them by publicists listing who attended which store opening — called it a union of beauty and bloodlines, an exquisite ceremony, the best of New York, Connecticut and international society. Although I do not possess Suzy's talent to panegyrise the rich and the chic, I must admit it was just as she described it, but more, much more. Suzy went home early, I was the last to leave; ergo my advantage. There is always a moment of truth during a party.

It arrives just as the booze, the late hour, the heady music and the sex drive fuse, creating a magical juncture that remains in the subconscious for years to come. I felt such a moment of truth throughout the Herrera ball, most likely the last great one I'll be attending in my lifetime. (I say this because — at least here in the Bagel — the barbarians are now inside the gates, the old guard having gone the way of Napoleon's, with the nouveau riche and vulgar being the ones giving the parties.) The occasion was the marriage of Patricia Herrera and Gerrit Lansing Jr., two young people blessed with looks and charm, and not a small amount of the root of all envy. I'll start with the parents. Reinaldo Herrera is one of my oldest and closest friends, scion of an old and noble Spanish-Venezuelan family whose seat in Caracas is the oldest continuously inhabited house in the Western Hemisphere. Built in 1590 by his ancestor, La Vega is perhaps a white elephant in today's egalitarian times, but proof that powerful people back then not only knew how to spend, but also how to live graciously and in the best of taste. Not that you'd know it meeting Reinaldo. Like a fool, he renounced his title of Marquis of Torre Casa, proclaiming that the times in his country are not conducive to handles. I say the opposite. Now's the time to stick it to the vulgar ones, and having a real title today is as important as not having one was, say, in Italy circa the Thirties, when so many had phony ones.

Be that as it may, his wife, Carolina, is the greatest of designers, a unique beauty whose designs combine the elegance of Valentino. the tradition of Balenciaga, and the flair of Oscar de la Renta, and this, coming from someone who knows as much about fashion as Tony Blair's father-in-law knows about manners, is really saying something. All it takes is a bit of common sense. For example, I look at a beautiful girl dressed in Stella McCartney, and I want to puke. Ditto for those other Brit queens, like McQueen, who humiliate women by wrapping them in freak costumes. Carolina's managed to transmit her innate grace and class into the clothes she designs, and women are the better for it. But back to the party.

The night before, the Lansings threw a bash at Indochine where I found myself seated on the right of Mrs Lansing. She's from an old Philadelphia family, with the kind of friendliness and warmth that very old money provides. In fact, she and her husband reminded me of people I used to know during the Fifties, very few of whom are still around. Gerrit Lansing descends from Robert Livingston, one of the most important political families in colonial America. Needless to say, it was a great start to a great weekend of festivities. Who was there? Well, it'll be easier to say who wasn't. For starters, no hacks, no celebrities, no drag queens, no chic drug dealers. The Herrera ball was white tie, in a tent by Robert Isbell which turned the outdoor space of the Cooper Union into an 18thcentury garden room. Pilasters covered in camelia leaves, a wonderful band playing both old and modern, and 200 young people tripping the light fantastic — now that's what I call a great party. I watched my young son doing the rounds, girls looking at him the way girls tend to look at someone who is extremely good-looking but doesn't know it, and I felt happy and proud, despite the fact I was not part of the main action.

Carolina had placed me next to her, so I took it easy on the booze. Up to a point, that is. The mix was perfect, 3-1, three youngsters to one oldie, like a good martini. The bride and groom were just perfect, none of that Four Weddings and a Funeral stuff — no freaks, no uglies, no slobs. My best moment was when I spotted a certain Miss P, and asked my daughter whether she knew her. 'She's a coke-head, a drunk and a whore, daddy,' said my little girl looking decidedly angry. It was the best

news I had since the fall of France in 1940. Alas, it was not to be. Miss P disappeared into the night while I was dancing with the mother of my children. Oh well, another time perhaps. Nothing like a triple-threat woman to wake up these old bones.