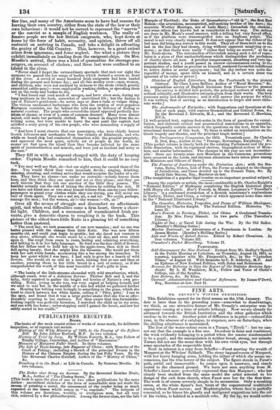 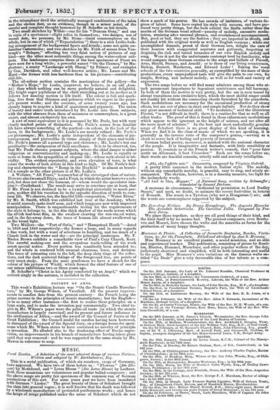 This Exhibition opened for its third season on the 17th January. The date is later than in the preceding years—somewhat to disadvantage, we think, as one attractive feature of Mr. Grundy's enterprise was its opportune coming at a time of artistic lethargy. Now we are already far advanced towards the British Institution and the other galleries which unclose in its wake. Another point of difference is in price—reduced this year, in the absence of a catalogue, to sixpence, save on Saturdays, when the shilling admittance is maintained.

The lion of the water-colour room is a Turner, " Tivoli " : but we can- not say that the example is a fine one. Its colour is faint and traditional, the work evidently belonging to a period when the master condescended to be a pupil ; and the manipulation is neither broad, strong, nor minute. Turner did not see the scene thus with his own vivid eyes, but through some spectacles of the respectable kind.

Next in interest is a copy from Scheffer —Faust meeting the wraith of Margaret at the Witches' Sabbath. The stony impassiveness of Margaret, with her heavy hanging arms, holding the infant of which she seems un- conscious, has the true horror of the subject. The figure stands in Faust's path, awful and immoveable : he comes upon it unaware, and stands rooted to the charmed ground. We have not seen anything from M. Scheffer's band more powerfully expressed than this Margaret ; who has clearly been studied from the same model the artist selected in his design of the exit from church, when Faust sees her for the first time. The work is of course severely simple in its accessories. Only a croaking raven, at the white figure's feet, hints of the supernatural multitudes among whom Faust moves ; and Mephistopheles, whose face is partially concealed, as he hisses his ghastly and malignant suggestions into the ear of his victim, is habited in a monkish robe. By the by, we would notice

in the triumphant devil the artistically managed combination of the talon and the cloven foot, as an evidence, though in a minor point, of the careful and complete thought bestowed by M. Scheffer on his details.

Two small sketches by Wilkie—one for his "Duncan Gray," and one in sepia of a sportsman—slight relics in themselves ; two designs, not of recent date, we presume, by Mr. Stone—timid commonplaces on the whole, but in one of which ("Expostulation") there is a nice Leslie-look- ing arrangement of the background figure and details ; some not quite un- familiar Cattermoles; and two sketches by Mr. Frith of scenes from Van- brugh's "Relapse," affording but very faint notion of pictures of any kind—are the other most noticeable things among the water-colour sub- jects. The landscapes comprise three of the best specimens of Prout we have seen for a long while ; a powerful sunset "On the Thames," by Ma- plestone ; a sunny "Landscape with Sheep," by Palmer; and examples

by Cox, Davidson, and other well-known artists ; Mr. lance and Mr. Hunt—the former with less hardness than in his pictures—contributing still-life.

The oil-colour section contains the masterpiece of the gallery—the ic Mother's Hope," by Leslie, (engraved, we believe, in an old Anus- let,) than which nothing can be more perfectly natural and delightful. The bright eager joyfulness of the child stretching out at its mother as it follows her dancing motion is life itself The colour is full and spark- ling, free from that thinness and paleness which we regret in the paint- er's present works ; and the costume, of some twenty years ago, has already begun to acquire a kind of quaintness and piquancy. The union of beauty and entire truth introduced by Mr. Leslie into these subjects, with the utter absence from them of meanness or commonplace, is a great secret, and almost.exclusively his own.

A sort of semi-equivalent to it is possessed by Mr. Poole, but with very clearly marked points of distinction. Mr. Poole's scenes from familiar life have always something of the poetical—in colour, in the look of the faces, in the backgrounds ; Mr. Leslie's are merely refined : Mr. Poole's are picturesque ; Mr. Leslie's quite independent of the elements of pic- turesqueness, and pictureliko in virtue simply of their grace and truth: Mr. Peek's possess all a general type and character ; Mr. Leslie's but one peculiarity—the uniqueness of their excellence. It is to be observed, too, that Mr. Poole chooses peasant subjects, where the chid danger is either vulgarism or conventionality and making-up ; Mr. Leslie is equally or more at home in the sympathies of elegant life—whose rock-ahead is tri- viality. The evident superiority, and even elevation of tone, is what raises the works of both artists in this kind so high. Of Mr. Poole's feel- ing and characteristics the " Romp in the Hayfield" is almost as beauti- ful a sample as the other picture is of Mr. Leslie's.

A Webster, "All Fours," is somewhat of the stereotyped class of nature. Here are also two small Ettys ; and a Frost, in which the artist borrows a sub- ject, but does not share the humour, of—whom would the speculator ima- gine ?—Ornikshank ! The result may serve to convince one at least, that if Mr. Frast is not destined to be a nympholept pictorially to much pur- pose, neither did his vocation lie in the opposite direction of truth to com- mon life. We observe, too, the fanciful little composition, " Water Elves," by Mr. B. Smith, which was exhibited last year at the Academy, where it could scarcely make itself seen, and which reappears now with unproved manipulation. There is unquestionable feeling for the requirements of the style it belongs to, in the dim thick shadow of the reeds across which the elvish leaf-boat flits, in the swallow cleaving the sun-tinged water, and in the far-away dome, the trace of human life almost swallowed up in the broad light.

Two Miillers—the "Port of Ostia," and "Hampstead Heath"—dated in 1838 and 1842 respectively—the former a large, and in many regards a fine work, but with a want of selectness in handling, and too much of a Claude look in the water and sky—are the principal landscapes. Mr. F. Madox Brown exhibits a remarkable view of Paul's Cray Church, Kent. The careful making-out and the scrupulous truth-telling of the work arrest special notice. Every portion has manifestly been attended to ; and the whole is rendered with unusual clearness, force, and decision. The trace of retreating rain to the left, the deep slaty tinge of the reflec- tions, and the dark scattered foliage of the foreground tree, are points of very exact study. From the same gentleman we have a sketch for the colour of his picture of Wielif, which formed the chief feature of one of our minor exhibitions two or three years ago.

M. Scheffer's "Christ in his Agony comforted by an Angel," which we noticed singly in the autumn, is included in the collection.