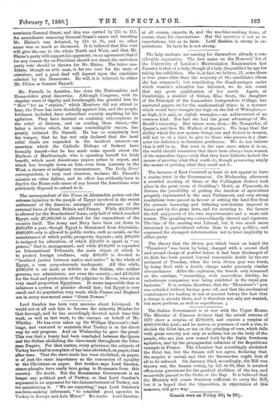 Page 3, 7 February 1880 — The lady students are earning for themselves already a con-
Close

The lady students are earning for themselves already a con-

siderable reputation. The first name on the Honours' list of the University of London's Matriculation Examination last January is that of a lady, though of a lady disqualified by age for taking the exhibition. She is, in fact, we believe, 21, some three or four years older than the majority of the candidates whom she has surpassed ; but considering the disadvantages under which women's education has laboured, we do not count that any great qualification of her merit. Again, at Cambridge, a student of Girton, Miss Scott, the daughter of the Principal of the Lancashire Independent College, has answered papers set for the mathematical tripos in a manner which would have brought her high on the list of Wranglers,— as high, it is said, as eighth wrangler,—an achievement of no common Lind. Nor had she had the great advantage of Mr. Routh's tutorship. Her tutors were, first,—Mr. Temperley, of Queen's, and then Mr. Walker, of Queen's. We hope that the ability which the new system brings out and fosters in women, will not be of a kind to give to those who possess it a char- acter for deficiency in feminine gentleness. We do not believe that it will be so. But even in the rare cases where it is so, the world should remember that there have always been women of the masculine type,—only that they have hitherto lacked the means of proving what they could do, though possessing amply the means of proving what they could not be.