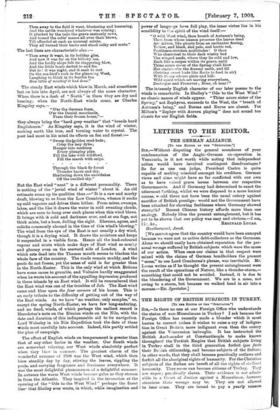 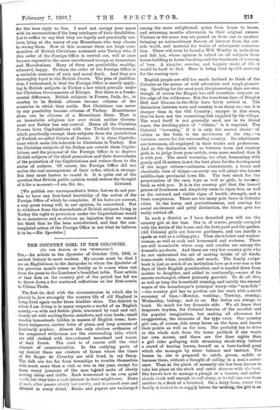 THE RIGHTS OF BRITISH SUBJECTS IN TURKEY.

Sin,—Is there no one at our Foreign Office who understands the status of non-Mussulmans in Turkey P I ask because the Foreign Office has recently made a blunder which it must hasten to correct unless it wishes to raise a cry of indigna- tion in Great Britain more indignant even than the outcry against the Venezuelan imbroglio. It has instructed the British Ambassador at Constantinople to make known throughout the Turkish Empire that British subjects living in Turkey shall in the third generation forfeit ipso facto their Br:Lig' citizenship, and become subjects of the Sultan; in other words, that they shall become practically outlaws and forfeit all the aboriginal rights of humanity. For the Christian subjects of the Sultan are bereft of all the rights of civilised humanity. They never can become citizens of Turkey. They are rayas ; prke.tieully slaves. Their evidence is not admis- sible in a Court of Justice against a lltrussulman, however atrocious their wrongs may be. They are not allowed to bear arms. They are bound to pay a yearly ransom for the bare right to live. I need not occupy your space with an enumeration of the long catalogue of their disabilities. Let it suffice to say, that they are legally and practically out- laws, lying at the mercy of any Mussulman who may choose to wrong them. Now at this moment there are large com- munities of British Christians scattered over Turkey who, if this order of the Foreign Office is carried out, will at once become exposed to the same unredressed wrongs as Armenians and Macedonians. Many of them are gentlefolks, wealthy, educated, happy. To them the order of the Foreign Office is a veritable sentence of ruin and moral death. And they are thoroughly loyal to the British Crown. The plea of justifica- tion, I understand, is that the Foreign Office is merely apply- ing to British subjects in Turkey a law which prevails under the Christian Governments of Europe. But there is a funds- mental difference. British subjects in France, Italy, &c., in ceasing to be British citizens become citizens of the countries in which they reside. But Christians can never by any possibility become citizens of Turkey. Mussulmans alone can be citizens of a Mussulman State. That is an immutable religious law over which neither Govern- ment nor Sultan has any control. Hence all the Christian Powers have Capitulations with the Turkish Government, which practically exempt their subjects from the jurisdiction of Turkish so-called Courts of Justice. It is these Capitula- tions which make life tolerable to Christians in Turkey. But the Christian subjects of the Sultan are outside these Capitu- lations, and the proposal of the Foreign Office is to deprive British subjects of the third generation and their descendants of the protection of the Capitulations and reduce them to the status of outlaws. Of course, the Foreign Office did not realise the real consequences of their order, which is strange. But they must hasten to cancel it. It is quite out of the question that British public opinion would endure the thought of it for a moment.—I am, Sir, &c., CITIZEN.

[We publish our correspondent's letter, but we do not pro- fess to have any first-hand knowledge of the action of the Foreign Office of which he complains. If his facts are correct, a very great wrong will, in our opinion, be committed. But to withdraw from the descendants of British subjects living in Turkey the right to protection under the Capitulations would be so monstrous and so obvious an injustice that we cannot but think that he gas been misinformed, and that the con- templated action of the Foreign Office is not what he believes it to be.—En. Spectator.]