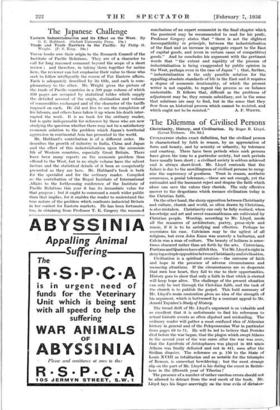 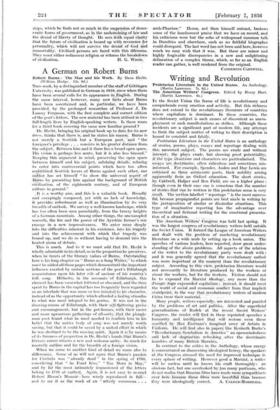 The Dilemma of Civilised Persons

Christianity, History, and Civilisation. By Roger B. Lloyd. (Levitt Dickson. 10s. 6d.) CIVILISATION eludes exact definition, but the civilised person is characterised by faith in reason, by an appreciation of form and beauty, and by serenity or urbanity, by tolerance and courtesy. There have been periods when such persons have given the tone to a particular society, but such periods have usually been short ; a civilised society is seldom achieved and is always short-lived. Mr. Lloyd contends that the failure is due to the unwillingness of civilised persons to recog- nise the supremacy of goodness. Trust in reason, aesthetic awareness, a genial tolerance,—these are not enough, yet the rationalist and the humanist reject and despise the faith which alone can save the values they cherish. The only effective answer to the despotisms which menace civilisation today is the Christian faith.

On the other hand, the sharp opposition between Christianity and culture, church and world, so often drawn by Christians, is also mistaken. Christianity can only be fully realised, when knowledge and art and sweet-reasonableness are cultivated by Christian people. Worship, according to Mr. Lloyd, needs all the resources of architecture, poetry, prose-style and music, if it is to be satisfying and effective. Perhaps he overstates his case. Calvinism may be the ugliest of all religions, but even John Knox was scarcely a barbarian, and Calvin was a man of culture. The beauty of holiness is some- times obscured rather than set forth by the arts. Cistercians, Puritans and Quakers have all felt this. Yet Mr. Lloyd is right in denying a simple opposition between Christianity and civilisation.

Civilisation is a spiritual creation—the outcome of faith and hope in the presence of adverse circumstances and menacing situations. If the circumstances are so desperate that men lose heart, they fail to rise to their opportunities. History goes to show that only a faith in that which is eternal will keep hope alive. The challenge of the present situation can only be met through the Christian faith, and the task of the church is to publish the gospel. This bald summary of Mr. Lloyd's main contention gives no idea of the strength of his argument, which is buttressed by a constant appeal to Mr. Arnold Toynbec's Study of History.

The broad drift of Mr. Lloyd's argument is so valuable and so excellent that it is unfortunate to find his references to actual historic events so often slipshod and misleading. The ordinary reader will gather a most confused idea of Athenian history in general and of the Peloponnesian War in particular from pages 69 to 71. He will be led to believe that Pericles died before the war began, that the plague which swept Athens in the second year of the war came after the war was over, that the Lysistrata of Aristophanes was played in 404 when Athens was finally defeated and not in 411, soon after the Sicilian disaster. The reference on p. 150 to the State of Louis XVIII as totalitarian and as notable for the triumphs of Reason, is somewhat -bewildering ; but the most strange slip on the part of Mr. Lloyd is his dating the event in Bethle- hem in the fifteenth year of Tiberius !

The presence of a number of rather careless errors should not be allowed to detract from the real merit of the book. yr. Lloyd lays his fingeramerringly on the true evils of dietator- ships, which he finds not so much in the sumexision of demo- eratic forms of government, as in the undermining of-law and the denial of liberty of thought. He seeii,:-Wiai 'equal clarity that the future of civilisation is bound up With reverence for personality, Which will not survive the denial of -God and immortality. Civilised persons ate faeed with this dilemiria. They mustreither rediscover religion or witness the breakdoivn