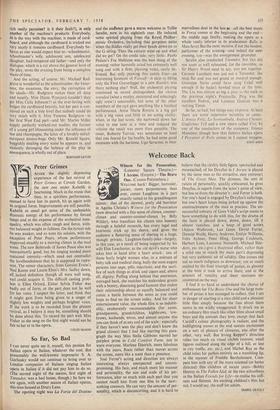 WELCOME back ! Bigger, hammier, juicier, more preposterous than ever, comes Laughton in a part exactly suited to his grandiloquent talents : that .of the shrewd, jowly old barrister in Agatha Christie's Witness for the Prosecution (now directed with a fine sense of climax, counter- climax and counter-counter-climax by Billy Wilder), who transfixes his clients into honesty through a baleful monocle, has every legal and histrionic trick up his sleeve, and gives the audience a flattering sense of sharing in a huge, though private, Laughton-family--jbke—largely, in this case, as a result of being supported by his wife Elsa Lanchester, as the old devil's nurse who takes him' in 'hand after a heart attack : one of those burly bright women who, in a mixture of baby talk and medical slang, bully the most august patients into naps, pills, injections, and the sacri- fice of such things as drink and cigars and, above all, dignity. Puffing along behind that enormous, outraged back, she matches his malevolent grunts with a breezy, disarming good humour that makes their relationship about as equally balanced and comic a battle between the sexes as you could hope to find on the screen today. And for sheer entertainment value, the whole film is so indubit- ably, exuberantly recommendable (for aunts. grandparents, grandchildren, highbrows, low- brows, husbands, wives, and almost anyone else you can think of at any end of the scale : especially if they haven't seen the play and don't know the grand climax) that I feel like starring this para- graph the way Miss Stella Gibbons starred her purplest prose in Cold Comfort Farm, just to warn everyone. Marlene Dietrich, more fabulous with the years, floats rather than moves across the screen, more like a scent than a presence.

Jose Ferrer's acting and direction are always interesting, always unexpected and uncom- promising. His face, and much more his manner and personality, the size and scale of his per- formance, alter so much with each part that you cannot recall him from one film to the next : nothing connects. He can vary the amount of per- sonality, which is disconcerting, and it is hard to believe that the clerkly little figure, spectacled and moustached, of his Dreyfus in I Accuse is played by the same man as the attractive, easy extrovert of The Great Man. The dimness, the sort of ration of personality, quickly exhausted, he gives Dreyfus, is superb from the actor's point of view, but less so from the director's : and Ferrer is both. For one's head is engaged by Dreyfus's sufferings, but one's heart keeps being jerked up, against the unattractiveness of the man in practice. The un- successful 'sobriety of 0:ire Vidal's script seems to have something to do with this, for the drama of the facts is played down, down, down, till it almost vanishes; and a heap , of good actors (Anton Walbrook, Leo Genn, David Farrar, Donald Wolfit, Harry Andrews, Emlyn Williams, Felix Aylmer, Peter llling, George Coulouris, Herbert Lom, Laurence Naismith, Michael Hor- dern, etc. etc.) give a theatrical effect, rather than a solid one to match the main part's depressing but very authentic air of solidity. One comes out not so much indignant as downcast; not so much exalted by the final triumph of justice, as gloomy at the time it took to arrive there, and at the amount of venality and sheer nastiness en- countered on the way.

I find it so hard to understand the chorus of enthusiasm for 7'he Brave One and the large num- ber of prizes it has managed 'to collect, that I am in danger of snarling at a nice child and a pleasant little film simply because the fuss about them seems to me wildly exaggerated. It struck me as an ordinary film much like other films about small boys and the animals they. love, except that Jack Cardiff's colour photography is radiant, and the bullfighting scenes at the end sustain excitement on a sort of plateau of climaxes, one after the other, very well. But Irving Rapper's direction relies too much on visual cliches (sunsets, small figures outlined along the edge of a hill, or lost in city traffic, etc. etc.), and Michel Ray as the child relies for pathos entirely on a trembling lip, in the manner of Freddie Bartholomew. Com- pare him with any of the more talented (or better directed) film children of recent years—Bobby Henrey in The Fallen Idol, or the two schoolboys in the Italian Friends for Life—to realise his stiff- ness and flatness. An exciting children's film but not, I would say, the stuff for adults. ISABEL QUIGLY