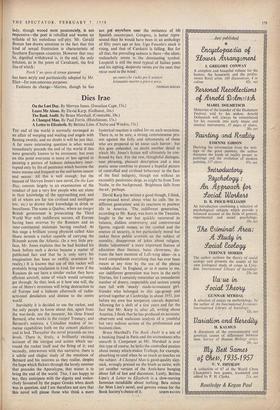 On the Last Day. By Mervyn Jones. (Jonathan Cape, 15s.) Leave Me Alone. By David Karp. (Gollancz, 16s.) The Bank Audit. By Bruce Marshall. (Constable, 18s.) A Changed Man. By Paul Ferris. (Hutchinson, 15s.) A Letter to Elizabeth. By Bettina Linn. (Chatto and Windus, 15s.) THE end of the world is normally envisaged as an affair of weeping and wailing and angels with flaming swords, and no doubt it will be just that. A far more interesting question is what would immediately precede the end of the world if this were generally known to be imminent; but even on this point everyone is more or less agreed in painting a picture of hideous debauchery inter- rupted only by fits of penitence which become the more intense and frequent as the end looms nearer and nearer. All this is well enough; but the interest of Mervyn Jones's new novel, On the Last Day, consists largely in an examination of the conduct of just a very few people who are alone in their knowledge of the approaching end, and all of whom are far too civilised and intelligent (etc. etc.) to drown their knowledge in drink or beastliness, The scene is Quebec, where an émigré British government is prosecuting the Third World War with indifferent success, all Europe having been overrun by the Russians and an inter-continental stalemate having resulted. At this stage a brilliant young physicist called Alan Shore invents a rocket capable of carrying the H-bomb across the Atlantic. (In a wry little pre- face, Mr. Jones explains that he had finished his book before such a device became a matter of publicised fact and that he is only sorry his imagination has been so swiftly overtaken by reality,) It is known that use of this rocket will probably bring retaliation in kind, for even if the Russians do not have a similar rocket they have efficient aircraft, some of which would certainly get through. So that, look at it how one will, the use of Shore's invention will bring destruction to all Europe and a hideous aftermath of radio- activated desolation and disease to the entire world.

Inevitably it is decided to use the rocket, and the only people to know about this, apart from the war-lords, are the inventor, his close friend Bernard, who works in the émigré Treasury, and Bernard's mistress, a Canadian student of im- mense capabilities both on the concert platform and in bed. Thereafter the novel proceeds on two levels. There is, firstly, a brilliantly exciting account of the intrigue and action which sur- round the rocket itself and the firing of it; and secondly, interwoven with this narrative, there is a subtle and elegiac study of the emotions of Bernard and his mistress as they realise, despite the hope which flickers through the lovely summer that precedes the Apocalypse, that winter is to bring the end of the world. This, I am happy to say, they anticipate with the dignity and melan- choly favoured by the pagan Greeks when death was in question, and I am therefore not sure that this novel will please those who think a more

hysterical reaction is called for on such occasions. There is, to be sure, a strong commonsense pro- test against the folly and inhumanity of those who are prepared to let loose such horror : but this goes unheeded, no doubt another detail in which Mr. Jones's fiction will ultimately be con- firmed by fact. For the rest, thoughtful dialogue, neat phrasing, pleasant description and a nice poetic sense combine to present a hopeful picture of controlled and civilised behaviour in the face of the final indignity, though not without an excusably pessimistic dirge, as might be from Tom Nashe, in the background. 'Brightness falls from the air,' perhaps.

David Karp has written a good though, I think, over-praised novel about what he calls 'the in- different generation' and its reactions to postwar life in America. The indifferent generation,' according to Mr. Karp, was born in the Twenties, fought in the war but quickly recovered its balance, dislikes controversy and controversial figures, regards money as the symbol and the essence of security, is not particularly moral but makes fierce public avowals on the subject of morality, disapproves of jokes about religion, thinks 'adjustment' a more important feature of education than literacy, hates cleverness, dis- trusts the bare mention of Left-wing ideas—in a word comprehends everything that has ever been meant at any time by the use of the phrase `middle-class.' In England, or so it seems to me, our indifferent generation was born in the early Thirties, for I certainly remember an immoderate number of dreary, respectable and serious young men (all with 'steady' made-to-measure girl- friends) who belonged to this age-group and arrived together at Cambridge in about 1951, just before my own less temperate coevals departed. Allowing for a shift of a few years and for the fact that Mr. Karp is, after all, writing about America, I think that he has produced an accurate; observant and malicious analysis of a youthful but very tedious section of the professional and business class. '

Bruce Marshall's The Bank Audit is a tale of a banking fraud in Paris and the accountants who unearth it. Competent as Mr. Marshall is over this type of course, he lacks the controlled passion about money which makes Trollope, for example, absorbing to read when he so much as touches on the subject. A Changed Man is good-quality slap- stick, wrongly praised on the blurb as satire, with yet another version of the Amis-hero banging about full of lust and discontent. Lastly, Bettina Linn's A Letter to Elizabeth is a slow-moving Jamesian •taradiddle about nothing. Beta minus for Miss Linn's novel, and gamma minus for the Book Society's choice of it, SIMON RAVEN