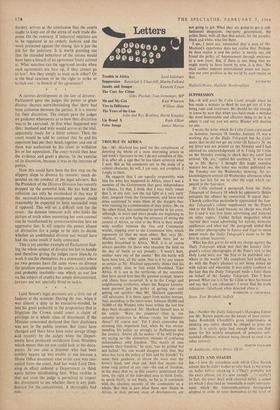 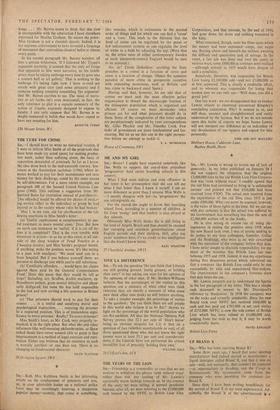 SIR,—I love the casualness with which Clive Barnes admits that he didn't bother to refer back to my article on ballet before attacking it. ('That:s probably not the exact phrase, yet it's near enough . . .'—really!) In fact, the piece dealt with classical ballet, a minor art which I described as 'essentially a court entertain- ment which the nineteenth-century bourgeoisie adopted in order to raise themselves to the level of kings. ...' Mr. Barnes seems to think that this view is incompatible with the admiration I have elsewhere expressed for Martha Graham. He misses the point: Miss Graham is not a classical dancer. Indeed, it is her supreme achievement to have invented a language of movement that contradicts classical ballet a: almost every point.

In his second paragraph Mr. Barnes wanders off into a private wilderness. 'If I followed Mr. Tynan's argument correctly, it seemed that the only art forms that appealed to him were narrative, so his intelli- gence must be taking umbrage every time he goes into a concert hall or art gallery.' That is nothing to the umbrage it's taking right now. I have re-read my article with great care (and some pleasure) and it contains nothing remotely resembling 'the argument' that Mr. Barnes ascribes to me. The value of narra- tive in art forms isn't even mentioned; in fact, the

only reference to plot is a capsule summary of the action of Giselle, expressly designed to expose its fatuity. I can only suppose that Mr. Barnes is so deeply immersed in ballet that words have ceased to have any meaning for him.