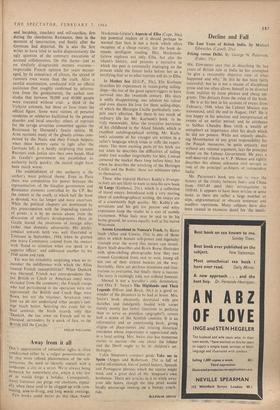 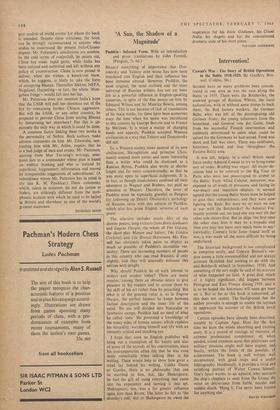 The Last Years of British India. By Michael Edwardes. (Cassell, 25s.) Peking versus Delhi. By George N. Patterson. (Faber, 35s.) MR. EDWARDES says that in describing the last years of British rule in India he has attempted 'to give a reasonably objective view of what happened and why.' In this he has been fairly successful; but he is not a master of disciplined prose and too often allows himself to be diverted from realities by loose phrases and cheap epi- grams. This detracts from the value of the book.

He is at his best in his account of events from' February, 1946, when the Cabinet Mission was announced, until the end in August, 1947. He is less happy in his selection and interpretation of events of an earlier period; and he attributes to Subhas Chandra Bose (with a wealth of metaphor) an importance after his death which he did not possess. While not unjustly' absolv- ing Mountbatten of any great responsibility for the Punjab massacres, he quite unjustly, and without any rational argument, lays the principal blame on the Labour Government. He pays a well-deserved tribute to V. P. Menon and rightly describes this almost unknown civil servant as 'one of the principal architects of independent India.'

Mr. Patterson's book sets out to trace the history of the rivalry between Inch,t and China from 1947-49 until their estrangement in 1959-61. It appears to have been written in some haste, as there are rather a large number of slips, ungrammatical or obscure sentences and needless repetitions. Many subjects have also been treated in excessive detail for 'the intelli- gent student of world events' for whom the book is intended. Despite these criticisms, the book can be strongly recommended to anyone who wishes to understand the present Indo-Chinese dispute. Mr. Patterson's conclusions are sombre. In the cold terms of realpolitik, he points out, China has made rapid gains, while India has been isolated and outwitted and left without any policy of counteraction. China is now poised to deliver, when she wishes, a knock-out blow, which, he suggests, is likely to take the form of occupying Bhutan. Thereafter Sikkim, NEFA, Nagaland, Darjeeling—in fact, the whole 'Mon- golian fringe'—would fall into her lap.

Mr. Patterson does not mention India's hope that the USSR will pull her chestnuts out of the fire by containing further Chinese aggression. But will the USSR, or any other country, be prepared to prevent China from seizing Bhutan by threatening her elsewhere? For this is ap- parently the only way in which it could be done.

A common factor linking these two books is the personality of Nehru. Both authors make adverse comments on him. Mr. Edwardes, con- trasting him with Mr. Attlee, implies that he is a bad judge of men and events. Mr. Patterson, quoting from Mao Tse-tung's writings, com- pares him to a commander whose plan is based on wishful thinking and who is 'enticed by superficial, fragmentary information and moved by irresponsible suggestions of subordinates.' (A subordinate whom Mr. Patterson has in mind is the late K. M. Panikkar.) These comments, which, taken in isolation, do not do justice to Nehru, are strikingly different from the syeb- phantic acclaim with which he used to be hailed in Britain and elsewhere as one of the world's greatest statesmen.