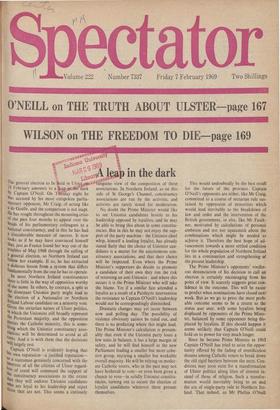 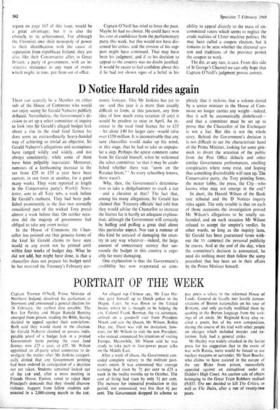 I t The general election to beeld in Ulst4.000 w - Iianguine

vie of the composition of these 24 February amounts to a #240-flinark associations. In Northern Ireland, as on this by Captain O'Neill. On T 'Clay night he side of St Georges Channel, constituency Was accused by his most outspoken parlia- associations are run by the activists, and mentary opponent, Mr Craig, of acting like activists are rarely noted for moderation.

a de Gaulle, and the comparison is not inapt. No doubt the Prime Minister would like He has sought throughout the mounting crisis to see Unionist candidates hostile to his of the past four months to appeal over the leadership opposed by loyalists, and he may heads of his parliamentary colleagues to a be able to bring this about in some constitu- national constituency, and in this he has had encies. But in this he may not enjoy the sup- a Considerable measure of success. It now port of the party machine : the Unionist chief looks as if he may have convinced himself whip, himself a leading loyalist, has already that, just as France found her way out of the stated flatly that the choice of Unionist can- troubles of May 1968 through the calling of didates is a matter for the autonomous con- a general election, so Northern Ireland can stituency associations, and that their choice follow her example. If so, he has extracted will be respected. Even where the Prime a dubious lesson from a system that differs Minister's supporters do decide to proniote fundamentally from the one he has to operate. a candidate of their own they run the risk in most Northern Ireland constituencies of returning an anti-Unionist : and where this there is little in the way of opposition worthy occurs it is the Prime Minister who will take of the name. In others, by contrast, a split in the blame. Yet if a similar fate attended a the dominant Unionist party might lead to loyalist as a result of a Paisleyite intervention the election of a Nationalist or Northern the resistance to Captain O'Neill's leadership Chen the sectarian nature of Ulster politics, Dramatic changes may yet occur between hwhich the Unionists still broadly represent now and polling day. The possibility of e Protestant majority, and the opposition violence obviously cannot be ruled out, and Parties the Catholic minority, this is some- there is no predicting where this might lead. thing which the Unionist constituency asso- The Prime Minister's calculation is presum- etations will be determined to avoid at all ably that even if the Unionist party loses a costs. And it is with them that the decisions few seats in balance, it has a large margin of Will largely rest. safety, and he will find himself in the new Captain O'Neill is evidently hoping that Parliament leading a smaller but more cohe- uts own reputation—a justified reputation— sive group, enjoying a smaller but workable as a statesman genuinely concerned with the overall majority. He will be relying on moder- „Interests of all the citizens of Ulster regard- ate Catholic voters, who in the past may not ns of creed will command the support of have bothered to vote—or even been given a "fie constituency associations to the extent chance to vote—in solidly Unionist constitu- _that they will endorse Unionist candidates encies, turning out to secure the election of kho are loyal to his leadership and reject loyalist candidates wherever these present 0,0 This would undoubtedly be the best result for the future of the province. Captain O'Neill's opponents are either, like Mr Craig, committed to a course of sectarian rule sus- tained by oppression of minorities which would lead inevitably to the breakdown of law and order and the intervention of the British government, or else, like Mr Faulk- ner, motivated by calculations of personal ambition and not too squeamish about the combinations which might be needed to achieve it. Therefore the best hope of ad- vancement towards a more settled condition for the whole population of Northern Ireland lies in a continuation and strengthening of the present leadership.

The Prime Minister's opponents' vocifer- ous denunciation of his decision to call an election is certainly encouraging from his point of view. It scarcely suggests great con- fidence in the outcome. This will be easier to predict when nominations have closed next' week. But as we go to press the most prob- able outcome seems to be a return to the status quo ante, with some loyalists being displaced by opponents of the Prime Minis- ter, balanced by some opponents being dis- placed by loyalists. If this should happen it seems unlikely that Captain O'Neill could hold on to power for very much longer.

Since he became Prime Minister in 1963 Captain O'Neill has tried to seize the oppor- tunity offered by the fading of reunification dreams among Catholic voters to break down the old rigid barriers between the sects. Con- ditions may soon exist for a transformation of Ulster politics along lines of interest in- stead of those of religion. Such a transfor- mation would inevitably bring to an end the era of single-party rule in Northern Ire- land. That indeed, as Mr Phelim O'Neill argues on page 167 of this issue, would be a great advantage; but it is also the obstacle to its achievement. For although the Unionists owe their monopoly of power to their identification with the cause of separation from republican Ireland, they are also. like their Conservative allies in Great Britain, a party of government, with an in- stinctive resistance to any train of events which might, in time, put them out of office. Captain O'Neill has tried to force the pace. Maybe he had no choice. He could have won his vote of confidence from the parliamentary party this week, but this would not have dis- armed his critics, and the erosion of his sup- port might have continued. That may have been his judgment, and if so his decision to appeal to the country was no doubt justified. It would be easier to feel confident about this if he had not shown signs of a belief in his ability to appeal directly to the mass of un- committed voters which seems to neglect the crude realities of Ulster machine politics. He may have called a coupon election, but it remains to be seen whether the electoral sys- tem and traditions of the province permit the coupon to work.

The die, at any rate, is cast. From this side of St George's Channel we can only hope that Captain O'Neill's judgment proves correct.