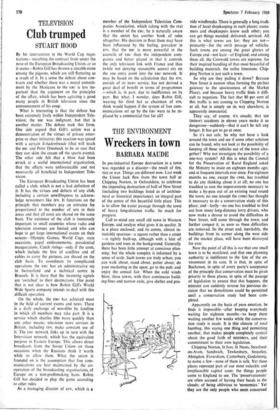 By his intervention in the World Cup nego- tiations—snatching the contract from under the nose of the European Broadcasting Union, or so it seems—Robin Gill has thrown a sizeable stone among the pigeons, which are still fluttering as a result of it. In a sense the debate about con- tracts and whether there was a moral commit- ment by the Mexicans to the EBU is less im- portant than the argument on the principles of the affair, which has been agitating a good many people in British television since the announcement of his coup.

What is interesting is that the debate has been extremely lively within Independent Tele- vision; the BBC was indignant, but that is another matter. The debate took this form. One side argued that Gill's action was a demonstration of the virtues of private enter- prise or sheer initiative; this reaction was spiced with a certain Schadenfreude (that will teach the BBC and Peter Dimmock to be so sure that they can skim the cream off the sports events). The other side felt that a blow had been struck at a useful international organisation, that the effects were unforeseeable and not necessarily all beneficial to Independent Tele- vision.

The European Broadcasting Union has been called a club, which is not a bad definition of it. It has the virtues and defects of any club, including a certain unwillingness to acknow- ledge newcomers like rrv. It functions on the principle that members pay an entrance fee proportional to the number of sets in their areas and that all costs are shared on the same basis. The existence of the club is immensely important to small countries whose radio and television revenues are limited and who can hope to get large international events on their screens—Olympic Games, World Cups, state occasions, papal enthronements, presidential inaugurations, Czech risings—only if the costs,' which include the hire of satellites and of cables to carry the pictures, are shared on the club basis. To coordinate its complicated operations the EBU has an administrative HQ in Switzerland and a technical centre in Brussels. It is there that the incoming signals are 'switched' to their destinations. One point that is not clear is how Robin Gill's World Wide Sports company intends to deal with this difficult operation.

On the whole, the EBU has achieved most

in the field of current events and news. There is a daily exchange of newsfilm by landline in which all members may take part. It is a service which shuttles film more quickly than any other means; television news services in Britain, including rrN, make constant use of

it. The EBU network links up in turn with the lntervision network, which has the equivalent

purpose in Eastern Europe. This allows direct broadcasts from the Soviet Union on those occasions when the Russians think it worth while to allow them. What the union is founded on is the assumption that free com- munications are best maintained by the co- operation of the broadcasting organisationq„of Europe on a non-profitmaking basis. Robin Gill has decided to play the game according to other rules.

As a managing director of ATV, which is a member of the Independent Television. Com- panies Association, which (along with the rrA) is a member of the EBU, he is naturally aware that the union has another book of rules altogether. His decision to flout them may have been influenced by the feeling, prevalent in ITV, that the BBC is more powerful in the councils of EBU than the independent com- panies and better placed in that it controls the only television link with France and thus (while not denying reasonable access) sits on the one entry point into the EBU network. It may be based on the calculation that the rrv, outside of its news service, has not derived a great deal of benefit in terms of programmes —which is, in part, due to indifference on its part. But what, I wonder, does Robin Gill, wearing his third hat as chairman of rrN, think would happen if the system of free com- munications set up by the EBU were to be re- placed by a commercial free for all?