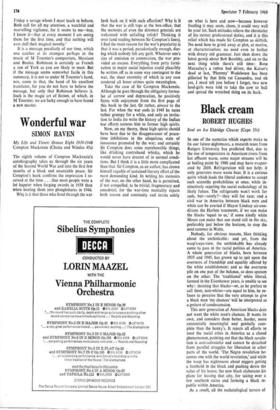 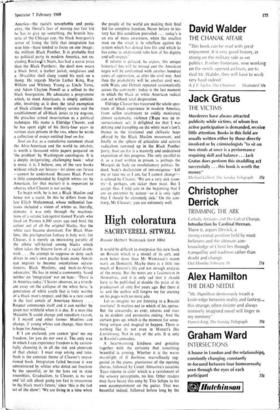 Soul on he Eldridge Cleaver (Cape 35s) In one of-the scenarios which experts make to fix our future nightmares, a research team from Rutgers University has predicted that, due to the rise of temperature in American rivers from hot effluent waste, some major streams will be at boiling point by 1980 and may have evapor- ated by 2010. Refrigeration will not help; it only generates more waste heat. It is a curious quirk which leads the liberal audience to accept such scientific probabilities at once, while in- stinctively rejecting the social eschatology of its likely future. The refrigerants won't work for suds, but—surely?—they will for race; and a civil war in America between black men and white can be averted if Mayor Lindsay air-con- ditions the Harlem tenements, if we can make the blacks `equal to us,' if some kindly white Moses can make that sun stand still in the sky, preferably just below the horizon, to stop the next summer in Watts.

Nobody, for obvious reasons, likes thinking about the unthinkable: and yet, from the wasp's-eye-view, the unthinkable has already come to pass in the racial politics of America. A whole generation of blacks, born between 1935 and 1945, has grown up to spit upon the overtures of friendship and equality offered by the white establishment; and as the overtures pile on one pan of the balance, so does sputum on the other. The `traditional' white liberal, formed in the Eisenhower years, is unable to see why: insisting that blacks—or, as he prefers to call them, non-whites—are equal to him, he re- fuses to perceive that the very attempt to give a black man 'my chances' will be interpreted as a gesture of condescension.

This new generation of American blacks does not want the white man's chances. It wants its own, and considers them better, harder, more existentially meaningful and genitally com- plete than the honky's. It rejects all efforts to treat the racial crisis in America as a closed phenomenon, pointing out that the black revolu- tion is anti-colonialist and cannot be detached from parallel struggles for liberation in other parts of the world. `The Negro revolution be- comes one with the world revolution,' and while the wasp has nightmares about niggers getting a foothold in the block and pushing down the value of his house, the new black elaborates his plans for leaving that city, for taking over a few southern states and forming a black re- public within America.

As a result, all the eschatological terrors of America—the racist's xenophobia and penis- envy, the liberal's fear of moving too fast lest he has to give up something, the brutish hys- teria of the Chicago cop, the black bourgeois's terror of losing the little that integration has won him—have tended to focus on one image: the militant Black Panther. It is probable that no political party in modern America, not ex- cluding Rockwell's Nazis, has had a worse press than the Black Panthers: the devil now wears a black beret, a leather jacket, sunglasses and a .50-calibre shell slung round his neck on a thong. He regards Martin Luther King, Roy Wilkins and Whitney Young as Uncle Toms, and Adam Clayton Powell as a sellout to the black bourgeoisie. He advocates a programme which, to most Americans, is simply unthink- able, involving as it does the total exemption of black citizens from military service and the establishment of all-black juries to try negroes.

He preaches armed insurrection as a political technique. His name is Eldridge Cleaver, and he has spent eight of his thirty-four years in various state prisons in the USA, where he wrote a collection of essays entitled Soul on Ice.

Soul on Ice, as a cumulative statement about the Afro-American and the world he inhabits,

is worth a thousand white papers prepared on 'the problem' by Washington sociologists. It is a deeply invigorating, challenging book : what is more, it is, I believe, one of the rare books without which our history—let alone our future —cannot be understood. Because Black Power

is little comprehended by English whites (or by American, for that matter) it is important to observe what Cleaver is not saying.

To begin with, he is not a Black Muslim and hence not a racist. In this he differs from the late Elijah Muhammad, whose millennial fan- tasies included a vision of whites as, literally, demons; it was only through the machina- tions of-a satanic kakogenist named Yacub. who lived on Patmos 6,300 years ago and bred the colour out of all the original blacks, that the white race became dominant. For Black Mus- lims, this pre-lapsarian fantasy is holy writ: for Cleaver, it is merely an interesting parable of the ethnic self-hatred among blacks which 'often takes the bizarre form of a racial death- wish . . . the attempt to suppress or deny such drives in one's own psyche leads many Ameri- can negroes to become ostentatious separa- tionists, Black Muslims, and back-to-Africa advocates.' He has in mind a community, based neither on 'integration' nor on hate: 'There is in America today,' Cleaver observes, in a trench- ant essay on the collapse of the white hero, `a generation of white youth that is truly worthy of a black man's respect, and this is a rare event in the foul annals of American history . . .

Respect commands itself and it can neither be given nor withheld when it is due. If a man like Malcolm X could change and repudiate racism, if I myself and other former Muslims can change, if young whites can change, then there is hope for America.'

If I am enslaved, you cannot 'give' me my freedom, for you do not own it. The only way in which I can experience freedom is by existen- tially choosing it, in all the risk and plenitude of that choice: I must stop asking and take.

Such is the constant theme of Cleaver's Impas- sioned book. Integration failed because it was administered by whites who doled out freedom by the spoonful, or let the laws rot in state assemblies. Gradualism, to Cleaver, is no use and 'all talk about going too fast is treasonous to the black man's future,' since 'this is the last act of the show': 'We are living in a time when the people of the world are making their final bid for complete freedom. Never before in his- tory has this condition prevailed . today's is an era of mass awareness, when the smallest man on the street is in rebellion against the system which has denied him life and which he has come to understand robs him of his dignity and self-respect.'

If reform is delayed, he argues, this unique historical bus will be missed and the American negro will be confronted with another hundred years of oppression, as after the civil war. And then the probability will be another civil war, with Watts and Detroit repeated systematically across the continent : today is the last moment in which the black or white American radical can act without total desperation.

Eldridge Cleaver has traversed the whole spec- trum of black experience in modern America, from sullen resentment to coldly motivated, almost systematic, violence (`Rape was an in- surrectionary act; it delighted me that I was defying and trampling on the white man's law'), thence to the irrational and chiliastic hope offered by the Black Muslim movement, and finally to the sphere of articulate and activist radicalism summed up in the Black Panther party. Soul on Ice is a masterly and undeceived exposition of this progress. The only parallel to it. as a tract written in prison, is perhaps the Marquis de Sade on revolutionary politics. In- deed, Sade's declaration of intransigence—'kill me or take me as I am, for I cannot change'—

is echoed by Cleaver. 'We are a very sick coun- try—I, perhaps, am sicker than most. But I accept that. 1 told you in the beginning that I am an extremist by nature—so it is only right that I should be extremely sick.' On the con- trary, Mr Cleaver: you are extremely well.