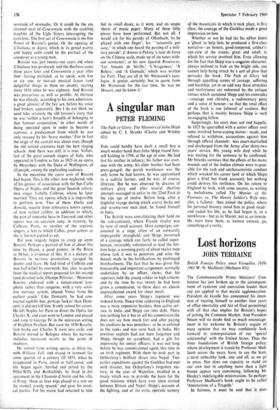 The Path of Glory: The Memoirs of John Shipp edited by C. J. Stranks (Chatto and Windus 42s) Fate could hardly have dealt a small boy a much weaker hand than John Shipp found him- self holding in 1794, at the age of nine. He had lost his mother in infancy; his father was over- seas with the army; his elder brother had been press-ganged; the parish workhouse was the only home he had known, he was apprenticed to a sadistic farmer, and he was, of course, illiterate. But he was obsessed by dreams of military glory and after several abortive attempts managed to enlist in the 22nd Foot at the ripe age of twelve. Before long, after a frightful voyage during which scurvy broke out and seventy-two men died, he found himself in India.

The British were consolidating their hold on the sub-continent, where French rivalry was by now of small account. Most campaigns cul- minated in a siege, often of an outwardly impregnable stronghold, and Shipp, possessed of a courage which can fairly be called super- human, invariably volunteered to lead the for- lorn hope, a storming party of about twelve men whose task it was to penetrate and seize the breach made in the fortifications by prolonged bombardment. The fact that he was given this honourable and important assignment, normally undertaken by an officer, shows that his superiors held the young soldier in high esteem; and by the time he was twenty he had been given a commission, in those days an almost unprecedented award for sheer merit.

After some years Shipp's regiment was ordered home. Peace-time soldiering in England was a more expensive business than active ser- vice in India and Shipp ran into debt. There was nothing for it but to sell his commission (he does not say how much for) and after paying his creditors he was penniless: so he re-enlisted in the ranks and was soon back in India. His previous exploits had not been forgotten and Shipp, though no sycophant, had a gift for impressing his senior officers; it was not long before he was commissioned again, this time in an Irish regiment. With them he took part in Ochterlony's brilliant thrust into Nepal. Two earlier expeditions against the Gurkhas had met with disaster, but Ochterlony's forgotten vic- tory, in the year of Waterloo, resulted in a treaty which was to provide the basis for the good relations which have ever since existed between Britain and Nepal. Shipp's account of the fighting, and of the eerie, operatic scenery of the mountains in which it took place, is first class; the courage of the Gurkhas. made a great impression on him.

Whether or not he had (as his editor hints) a 'ghost' to help him, he produced a first-class narrative—an honest, good-tempered, soldier's- eye-view of the events, great and small, in which his service involved him. Even allowing for the fact that Shipp was a sanguine character, always inclined to look on the bright side, one cannot help being struck by a sort of glow that pervades the book. The Path of Glory led through appalling scenes of carnage, suffering and hardship, yet in an odd way these atrocities and misfortunes are redeemed by the antique .virtues-which sustained Shipp and his-comrades --courage and chivalry, a • rudimentary piety and a sense of honour—so that the total effect of the book is one (almost) of cosiness. But perhaps that is mainly because Shipp is such an engaging fellow.

Surprisingly, his story does not end happily. In 1823 he quarrelled with a senior officer over some involved horse-coping matter: made, and refused to withdraw, accusations against him through official channels: was court-martialled and discharged from the Army after thirty-two years' service. His young wife died while he was waiting for the sentence to be confirmed. Mr Stranks surmises that the effects of his many wounds and of the Indian climate were respon- sible for the rash and uncharacteristic conduct which wrecked his career (and of which Shipp gives a brief but frank account); but nothing could destroy his resilience. On his return to England he took, with some success, to writing (a melodrama called The Maniac of the Pyrenees, or, The Heroic Soldier's Wife was, alas, a failure): then joined the police, where his personal bravery stood him in good stead : and ended his life, as he bad begun it, in a workhouse—but as its Master, not as an inmate. He must have been, as human animals go, something of a rarity.