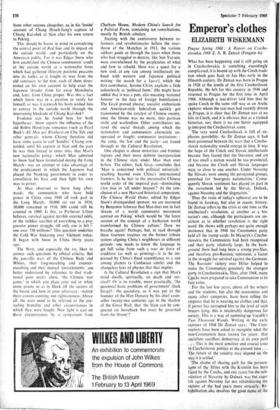 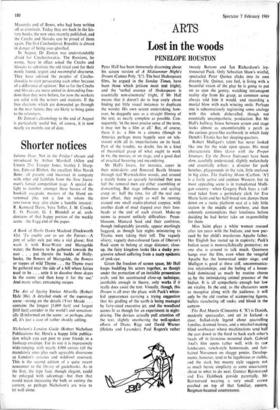 What has been happening and is still going on in Czechoslovakia is something exceedingly complicated; it is bound up with the Czech tradi- tion which goes back to Jan Hus early in the fifteenth century. Dr Zeman was born in Prague in 1928 at the zenith of the first Czechoslovak Republic. He left for this country in 1948 and returned to Prague for the first time in April 1968. Although a taxi-driver told him that he spoke Czech in the same stiff way as an Arctic explorer whom the taxi man had recently driven in, Prague, it. is clear that Dr Zeman was at no lass in Czech, and it is obvious that as a trained historian, too, there is- no one better equipped ko interpret the Czechoslovak scene. • .41a_e very word Czechoslovak is full of ex- plosive possibility. As. Dr Zeman says, it had been presumed between the wars-that a Czecho- slovak nationality would emerge in time. It was the hope of the Czech and Slovak intellectuals because they, feared that the literature and art of too small a nation .would be too provincial, and because the Czech and Slovak languages were so close to one another. Under Novotny the Slovaks were among the persecuted groups, punished for 'bourgeois nationalism.' Conse- quently Slovak sentiment has played its part in the, movement led by the Slovak, Dubcek, against Novotny and the Idogmatists.'

Thus the roots of today's upheaval are to be found in faraway, but also in recent, history. Dr Zeman refers tolhe crisis at one time as the intellectual's revolution, at another as a his- torian's one, although the participants are un- certain as to whether' revolution is the right word. He shows with perhaps not quite enough insistence that in 1948 the Communist party held all the trump cards. In Masaryk's Czecho- slovakia the Communists had been recognised and their party relatively large. In the back- ground there had long been a strong pro-Slav, and therefore -pro-Russian,--sentiment, a factor in the struggle for survival against the-Germans. The, Russians' victory over Hitler helped to make the Communists genuinely the strongest party in Czechoslovakia. Thus, after 1948, many cieChs were prepared to take Communism at its

For the last few years, above all the- writers and the students, but also the' economists and many -other categories, have been telling the emperor that he is wearing no clothes and that, if power has corrupted him to the level of such brazen lying, this is intolerably dangerous, for society. This is a way of summing-up Vaculik's Two. ThouSand Words. Writing in the early summer of 1968 Dr Zeman says : 'The Com- mpnists have been asked to recognige what the non-Communists have - known for years: that socialism sacrifices democracy_ at its own peril This is. the most sensitive and crucial, issue in Czechoslovak politics at the present time . The future of the country may -depend on the way it is settled.'

The shame of sharing guilt for:the persecu- tioni of the 'fifties with the Kremlin has been faced,by the Czechs, and one causeloF the 'sub- stitution of Novotny by Du.bcek was the anger felt against Novotny for not rehabilitating the victims of the bad 'years ,more seriously. Re- h#bilitation also involves the good name.of the

Masaryks and of Benes, who had been written off as criminals. Today they are back' in the his- tory books, the new ones recently published, and the Czechs and Slovaks can be proud of them again. The first Czechoslovak Republic is almost in danger of being over-glorified.

In August, Dr Zeman was understandably afraid for Czechoslovakia. The Russians, he wrote, 'have in effect asked the Czechs and Slovaks to substitute the old ritual cant for their newly found, urgent and meaningful discourse. They have advised the peoples of Czecho- slovakia to start persecuting each other because of a difference of opinion.' But so far the Czechs and Slovaks are more united in demanding free- dom than they were before, for now the workers are solid with the writers and students. If the free elections which are demanded go through in the near future, they are likely to bring gains to the reformers.

Dr Zeman's chronology to the end of August is particularly useful but, of course, it is' now nearly six months out of date.