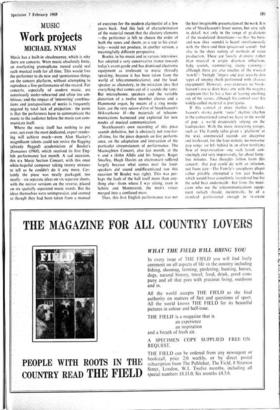 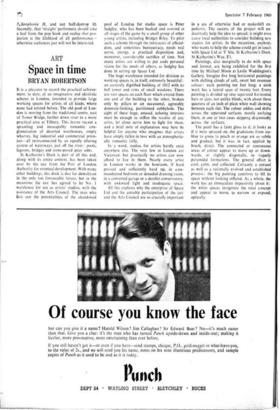 Music has a built-in obsolescence, which is why there are concerts. Were music absolutely finite, an everlasting gramophone record could seal each musical truth for all time. This would free the performer to do new and spontaneous things on the concert platform, without attempting to reproduce a live-performance-of-the-record. For concerts, especially of modern music, are notoriously under-rehearsed and -often too am- bitious; and the impact of 'interesting' combina- tions and juxtapositions of works is frequently negated by total lack of projection : the point is that the performers have to communicate the music to the audience before the music can com- municate itself.

Where the music itself has nothing to put over, not even the most dedicated, expert render- ing will achieve much—even Alan Hacker's magnificent talents could not revive the flagging (already flagged) academicism of Boulez's Domaines (1968), which received its first Eng- lish performance last month. A sad occasion, this ICA Music Section Concert, with this once white-hopeful composer taking twenty minutes to tell us he couldn't do it any more. Cer- tainly the piece was neatly packaged, too neatly—six separate ideas on six separate sheets, with the mirror versions on the reverse, placed on six spatially separated music stands. But the ideas themselves were unimpressive, and seemed as though they had been taken from a manual

of exercises for the modern clarinettist of a few years back. And this lack of characterisation of the material meant that the aleatory elements —the performer is left to choose the order of both the tunes and sheets, as a sop to his creat- ivity—would not produce, in another version, a meaningfully different perspective.

Boulez, in his music and in various interviews, has adopted a very conservative stance towards today's avant-garde and has dismissed electronic equipment as irrelevant to music (broadly speaking, because it has been taken from the world of telecommunications), and the loud- speaker as alienatory, in the mistaken idea that everything that comes out of it sounds the same. But microphones, speakers and the variable distortion of a twelve member chorus and a Hammond organ, by means of a ring modu- lator, are the very raison d'eire of Stockhausen's Mikrophonie II—the materials of telecom- munications harnessed and exploited for new modes of musical communication.

Stockhausen's own recording of this piece sounds definitive, but is obviously not true-for- all-time, for the piece depends on live perform- ance, on the adaptation and interaction of the particular circumstances of performance. The Macnaghten Concert, also last month, at the v and A (John Alldis and his Singers, Roger Smalley, Hugh Davies on electronics) suffered largely because what comes over the loud- speakers did sound undifferentiated (on this occasion M Boulez was right). This was per- haps the fault of the hall itself more than any- thing else—from where I was sitting, even in Schatz and Monteverdi, the men's voices merged into a confused mass.

Thus, this first English performance was not the best imaginable presentation of the work. It is one of Stockhausen's lesser scores, but very rich in detail. not only in the range of gradations of the modulated distortions—so that the here- and-now (live sounds) is heard simultaneously with the there-and-then (processed sound) - but also in the sheer variety of methods of voice production. These are !oosely dramatic rather than musical m origin drunken inflections. baby sounds, stammering, sleepy yawning-- although there are also touches of the musical 'non-U': Swingle :fingers and jazz scoo-be-doo types of singing (both performed with obvious enjoyment). However, over-exposure to Stock- hausen's music does leave one with the naggin4 suspicion that he has a fear of leaving anything out of his scores, although his control over his widely-culled material is prodigious.

If this control of inner rhythm is Stock- hausen's strong point. 'outer' rhythm (rhythm in the conventional sense) we leave to the world of pop--a world desperately relying on the loudspeaker. With the more interesting groups, such as The Family (also given a 'platform' at the icA), commercial records are deceptive and irrelevant, for the four-minute. no-nonsense pop songs are left behind in an often terrifying flow of improvisation-- one such lasted. con- vincingly and very impressively, for about forty- live minutes. Two thoughts follow from this concert: that pop could do with an infusion, not from jazz—The Family's saxophone player rather pitiably attempted a fcw jazz breaks, which would have completely foundered but for the solid beat underneath--but from the musi- cians who use the telecommunications equip- ment (which should, incidentally, be of a standard professional enough to re-create li,akrophonie II, and not half-destroy it). Secondly, that 'straight' performers should take a leaf from the pop book and realise that pro- jection is the lifeblood of all performance— otherwise audiences just will not be interested.