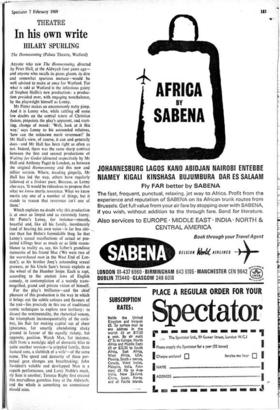 In his own write

The Homecoming (Palace Theatre, Watford) Anyone who saw The Homecoming, directed by Peter Hall, at the Aldwych four years ago— and anyone who recalls its pious gloom, its dire and somewhat spurious menace—would be well advised to make at once for Watford. For what is odd at Watford is the infectious gaiety of Stephen Hollis's new production : a produc- tion presided over, with engaging nonchalance, by the playwright himself as Lenny.

Mr Pinter makes an uncommonly natty pimp. And it is Lenny who, while rattling off some few doubts on the central tenets of Christian theism, pinpoints the play's apparent, and start- ling, change of mood: 'Well, look at it this way,' says Lenny to his astounded relatives, `how can the unknown merit reverence?' In Mr Hall's view, of course, it can and generally does—and Mr Hall has been right as often as not. Indeed, there was the same sharp contrast between the first and second productions of Waiting for Godot (directed respectively by Mr Hall and Anthony Page) in London, as between the original Homecoming and this new and niftier version. Where, treading gingerly, Mr Hall has led the way, others have regularly followed at a friskier pace. Because, as Lenny also says, 'It would be ridiculous to propose that what we know merits reverence. What we know merits any one of a number of things, but it stands to reason that reverence isn't one of them.'

Which explains no doubt why this production is at once so limpid and so extremely funny. Mr Pinter's Lenny, for instance—smooth, boastful and, like all his family, inordinately fond of hearing his own voice—is far less sini- ster than Ian Holm's formidable thug. So that Lenny's casual recollections of actual or pro- jected killings bear as much or as little resem- blance to reality as, say, his father's grandiose memories of his friend Mac ('We were two of the worst-hated men in the West End of Lon- don'); as his brother Joey's astounding sexual prowess, or his Uncle Sam's heroic exploits at the wheel of the Humber Snipe. Each is rapt, according to the ancient laws of English comedy, in contemplation of a weirdly trans- mogrified, grand and private vision of himself.

For the play's brilliance—and the chief pleasure of this production is the way in which it brings out the subtle colours and flavours of the text—lies precisely in this use of traditional comic techniques to explore new territory: to dissect the sentimentality, the rhetorical venom, the triumphant inconsequentiality of the cock- ney, his flair for making capital out of sheer ignorance, for smartly abandoning shaky ground in favour of the equally rickety, but opposite, position. Watch Max, for instance, shift from a nostalgic idyll of domestic bliss to quite another version—`a crippled family, three bastard sons, a slutbitch of a wife'—of the same scene. The speed and dexterity of these per- petual gear changes are breathtaking; John Savident's voluble and dewlapped Max is a superb performance, and Larry Noble's meek, sly Sam is another; Terence Rigby first created this marvellous gormless Joey at the Aldwych; and the whole is something no connoisseur should miss.