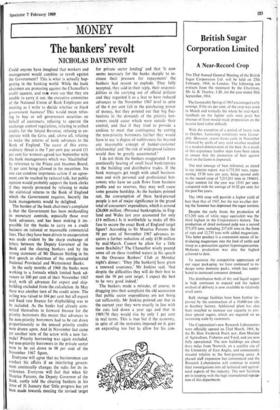 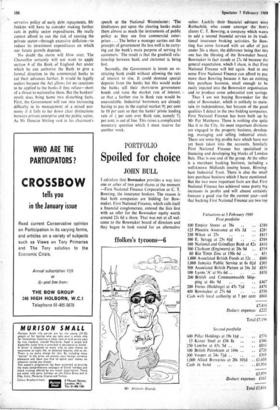 Could anyone have imagined that workers and management would combine to revolt against the Government? This is what is actually hap- pening in the banking world. While the bank chairmen are protesting against the Chancellor's credit squeeze, and msy even say that they are unable to carry it out, the executive committee of the National Union of Bank Employees are meeting as I write to decide whether to black government business! This would mean refus- ing to buy or sell government securities on behalf of customers, refusing to operate the exchange control regulations, refusing to collect credits for the Inland Revenue, refusing to co- operate with the Giro, and, above all, refusing to make the returns of bank advances to the . Bank of England. The cause of this extra- ordinary threat is the 7 per cent pay award (11 per cent for women) agreed last September with the bank managements which was 'blackballed' by reference to the Prices and Incomes Board, 3f per cent being allowed in the meantime. No one can condone impetuous action if an agree- ment can be reached by rational talk, but public opinion would probably support the bank clerks if they merely protested by refusing to make the statistical returns to the Bank of England which the Government -requires. Secretly the bank managements would be delighted.

The burden of the bank chairmen's complaint is that the Government has been mishandling its monetary controls, especially those over bank advances, and has been making it im- possible for the banks to carry on a credit business on rational or reasonable commercial lines. That they have been driven to exasperation was made evident by the sharp exchange of letters between the Deputy Governor of the Bank and the clearing bankers and by the strong statement of Mr Duncan Stirling in his first speech as chairman of the amalgamated National Provincial and Westminster Banks.

In the early months of 1968 the banks were working to a formula which limited bank ad- vances to 100 per cent of their November 1967 level, with all advances for export and ship- building excluded from the calculation. In May there was another turn of the credit screw. The ceiling was raised to 104 per cent but all export and fixed rate finance for shipbuilding was to be included. As the banks had already com- mitted themselves to forward finance for the priority borrowers this meant that advances to the non-priority borrowers had to be cut down Proportionately as the unused priority credits were drawn upon. And in November last came yet another turn of the screw with a new for- mula! Priority borrowing was again excluded, but non-priority borrowers in the private sector were to be cut down to 98 per cent of the November 1967 figure.

Everyone will agree that no businessman can conduct his affairs if an interfering govern- ment continually changes the rules for its in- terference. Everyone will feel that when Sir Maurice Parsons, the Deputy Governor of the Bank, curtly told the clearing bankers in his letter of 31 January that 'little progress has yet been made towards meeting the revised target for private sector lending' and that 'it now seems necessary for the banks sharply to in- crease their pressure for repayments' the bankers had reason to explode. They fully accepted, they said in their reply, their responsi- Abilities in the carrying out of official policies and they regarded it as a feat to have reduced advances to the November 1967 level in spite of the 6 per cent fall in the purchasing power of money, but they pointed out that big fluc- tuations in the demands of the priority bor- rowers could occur which were outside their control, and that if they tried to provide a cushion to meet that contingency by cutting the non-priority borrowers further they would have to use 'a degree of ruthlessness far beyond any reasonable concept of banker-customer relationship' and 'the risk of widespread failures would then be greatly accentuated.'

I do not think the bankers exaggerated. I am continually hearing of small local bankruptcies in the building and distributive trades. If the bank managers get tough with small business- men and with personal and professional bor- rowers who have no cash flows from business profits and no reserves, they may well cause some genuine hardship. As the bankers pointed out, the consumption of these hard-pressed people is not of major significance in the grand total of consumers' expenditure, which is around £26,000 million. (Personal bankruptcies in Eng- land and Wales last year accounted for only £14 million.) Is it worthwhile to make all this fuss to secure the exact Bank of England target figure? According to Sir Maurice Parsons the 98 per cent of November 1967 advances re- quires a further reduction of only £150 million by mid-March. Cannot he allow for a little more flexibility? The Chancellor wisely poured some oil on these troubled waters in his speech to the Overseas Bankers' Club at Monday night% dinner: 'They [the bankers] have given a renewed assurance,' Mr Jenkins said, 'that despite the difficulties they will do their best to meet the 98 per cent target. I expect the best to be very good indeed.'

The bankers made a mistake, of course, in dragging into their complaint the old accusation that public sector expenditures are not being cut sufficiently. Mr Jenkins pointed out that in the current year they were exactly in line with the cuts laid down a year ago and that in 1969/70 they would rise by only 1 per cent in real terms. This is true but if the economy, in spite of all the restraints imposed on it, goes on expanding too fast to allow for his con- servative policy of early debt repayments, Mr Jenkins will have to consider making further cuts in public sector expenditures. He really cannot afford to run the risk of causing the private sector—through excessive deflation—to reduce its investment expenditures on which our future growth depends.

No doubt the storm will blow over. The Chancellor certainly will not want to 'apply section 4 of the Bank of England Act under which he can authorise the Bank to give a formal direction to the commercial banks to cut their advances further. It would be legally useless because the Act allows for no sanctions to be applied to the banks if they refuse—short of a threat to nationalise them. But the bankers' revolt does bring home two disturbing facts. First, the Government will run into increasing difficulty in its management of a mixed eco- nomy if it fails to lay down clear distinctions between private enterprise and the public sector. As Mr Duncan Stirling said in his chairman's speech at the National Westminster: - 'The hindrances put upon the clearing banks make them almost as much the instruments of public policy as they are free commercial enter- prises . . . The better a manager carries out the precepts of government the less well is he carry- ing out the bank's main purpose of serving its customers.' The result is that the goodwill rela- tionship between bank and customer is being lost.

Secondly, the Government is intent on re- stricting bank credit without allowing the rate of interest to rise. It could demand special deposits from the banks but this would make the banks sell their short-term government bonds and raise the market rate of interest, - so that a further rise in Bank rate would be unavoidable. Industrial borrowers are already having to pay in the capital market 94 per cent to 10 per cent so that the banks' prime lending rate of 4 per cent over Bank rate, namely 74 per cent, is out of line. This raises a complicated monetary question which I must reserve for another week.