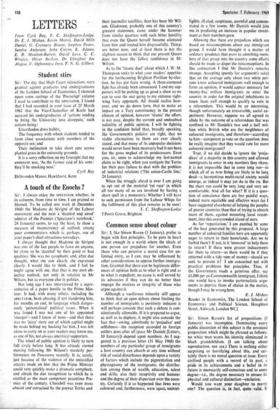 Sir: The day that High Court injunctions were granted against graduates and undergraduates of the London School of Economics, I chanced upon some cuttings of the 'Postscript' column I used to contribute to the SPECTATOR. I found that I had recorded in your issue of 23 March 1962 that the Vice-Chancellor of Keele had accused his undergraduates of `actions tending to bring the University into disrepute,' such actions being:

Unorthodox dress habits; The frequency with which students tended to form close associations with members of the opposite sex; and Their inclination to take short cuts across planted grass in the university grounds.

It is a sorry reflection on my foresight that my comment was, 'As the farmer said of his sons: they'll be smoking next.'