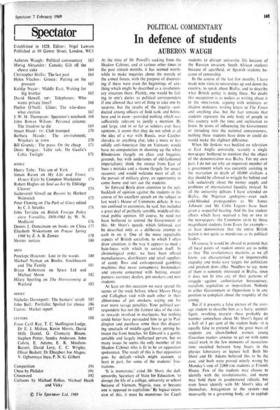 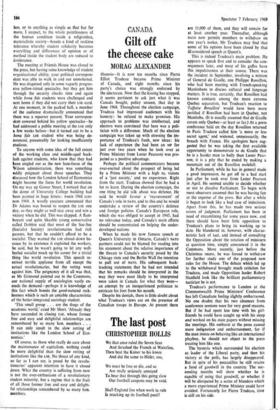 In defence of students

At the time of Mr Powell's sacking from the Shadow Cabinet, and at various other times in the past sixteen months, it has seemed worth- while to make inquiries about the morale of the armed forces, with the purpose of discover- ing if there were even the beginnings of any- thing which might be described as a revolution- ary situation there. Plainly, one would be fail- ing in one's duties as political correspondent if one allowed that sort of thing to take one by surprise, but the results of the inquiry—con- ducted among officers of field rank and below. here and in BAOR—provided nothing which was sufficiently relevant to justify a mention. By and large. and in so far as soldiers ever have opinions, it seems that they do not relish at all the idea of a war with Russia, over Czecho- slovakia or anything else; take a more or less solidly anti-American line on Vietnam; would have no compunction in shooting up the white Rhodesians (largely on class and linguistic grounds, but with undertones of old-fashioned imperialism); think the retreat from East of Suez a mistake and a shame (largely for sexual reasons); and would welcome most of all, in the pursuit of military glory, an opportunity to come home and sort out the students.

Sir Edward Boyle drew attention to the ugly backlash of opinion against the students in the course of his excellent speech on the subject in last week's House of Commons debate. It was not confined to extremists, he said, but included a great deal of perfectly sensible, middle-of-the- road public opinion. Of course, he need not have bothered to remind the Government of this. Mr Short's speech, which followed, can be described only as a deliberate attempt to cash in on it. One of the more regrettable aspects of British socialism, to which I often draw attention, is the way it appears to need a hate-focus. with which to sustain itself. In chronological order, we have been offered manufacturers, distributors and retail suppliers of candy floss and coin-operated gambling machines (but never consumers); bookmakers and anyone concerned with betting, except punters; currency dealers, pot smokers and now students.

At least on this occasion we were spared the scenes of the week before, where Messrs Hogg and Callaghan vied with each other in their abhorrence of pot smokers, crying out for ever more savage penalties. Your political cor- respondent has not the faintest idea of the risks or rewards involved in marijuana, but nothing could better have persuaded him to go to Pad- dington and purchase some than this disgust- ing spectacle of middle-aged heavy petting be- tween the front benches. Sir Edward is a gentle. amiable and largely ineffectual person, but on many issues he seems the only member of the Shadow Cabinet who is fit to be an opposition spokesman. The result of this is that opposition goes by default—which might account, at least in part, for some of the students' frus- trations.

`It is monstrous.' cried.Mr Short. the dull. unworthy Secretary of State for Education, `to disrupt the life of a college, university or school because of Vietnam, Nigeria, race. or because one is opposed to capitalism.' By logical exten- sion of this, it must be monstrous for Czech students to disrupt university life because of the Russian invasion, South African students because of apartheid, or Spanish students be- cause of censorship.

In the course of the last few months, I have made nine visits to universities up and down the country, to speak about Biafra, and to describe what British policy is doing there. No doubt this occupation is as useless as writing about it

in the SPECTATOR, arguing with ministers or

shadow ministers, writing letters to The Tittles and anything else, but the fact remains that students represent the only body of people in this country with the time and inclination to listen. In terms of influencing the Government or intruding into the national consciousness, nothing these students have done or could do would make the slightest difference.

When Mr Jenkins was heckled on television at East Anglia university, scarcely a single newspaper bothered to mention that the object of the demonstration was Biafra. For my own part, I do not see why an important member of a government which was currently assisting in the starvation to death of 10,000 civilians a day should be allowed to wriggle his behind and talk seductively about the money supply and problems of international liquidity instead. In all the university debates I have attended on Biafra, the Nigerian apologists—even such cold-blooded propagandists as Mr James Johnson and Mr Colin Legum—have been given a respectful hearing. And the few student efforts which have received a line or two in the newspapers—the Commons sit-in by those magnificent students from Essex for example— at least demonstrate that the entire British nation is not quite as murderous as its political leaders.

Of course,it would be absurd to pretend that, all focal points of student unrest are as noble

as that. The revolutionary marxists, as we all know, are characterised by an impenetrable stupidity and make easy targets for politicians and petulant dons alike. Needless to say, none of them is remotely interested in Biafra, since it does not fit into any of their patterns of struggle—against authoritarian bureaucracy, racialism, capitalism or imperialism. Nobody in either Government or Opposition is in any position to complain about the stupidity of the young.

But if it presents a false picture of the aver- age student to describe him as a hairy, unintel- ligent, revolting marxist—these probably do number somewhere about Mr Short's figure of a half of 1 per cent of the student body—it is equally false to pretend that the great mass of students are clean-limbed, earnest young Guardian readers anxious to get on with some social work in the few moments of recreation- time snatched between long hours in the physics laboratory or lecture hall. Both Mr Short and Dr Adams believed this to be the

case, and both were proved utterly wrong by Monday's vote of 2,000 ISE students at Friends

House. Few of the students may choose to identify with the revolutionaries, and many may hold them in goodnatured ridicule, but even fewer identify with Mr Short's idea of themselves. Antagonism to the system—not necessarily to a governing body, or to capital- Ism, or to anything as simple as that but far more, I suspect, to the whole pointlessness of the human condition inside a religionless, materialistic society—breeds a kind of reckless tolerance whereby student solidarity becomes everything and differences of opinion or of method inside the student body are reduced to irrelevance.

The meeting at Friends House was closed to the press, but having some knowledge of student organisational ability, your political correspon- dent was able to walk in and out unmolested. He was disguised only in some vaguely progres- sive yellow-tinted spectacles, but they got him through the security checks time and again while bona fide students were challenged and sent home if they did not carry their LSE card. At one moment, in the packed hall, a member of the audience dramatically announced that there was a reporter present. Your correspon- dent cowered behind his yellow spectacles—he had addressed a public meeting at the LSE only a few weeks before—but it turned out to be a bona fide LSE student who was being de- nounced, presumably for looking insufficiently studious.

To anyone with some idea of the full extent of the working class and middle-aged back- lash against students, who knew that they had been singled out as the new hate-focus of the Wilson administration, there was something oddly poignant about those speeches. They discussed how the London School of Economics might become the focus for world revolution. On my way up Gower Street, I noticed that on the dome of University College building had been painted in huge letters: PARIS 1968 LON- DON 1969. A woolly creature announced that Dr Adams was bound to reopen the LSE one day, so they might as well stay away and win a victory when he did. This was clapped. A flam- boyant and quite likeable young conservative called Dobbin said that most of the Soc-Soc (Socialist Society) revolutionaries had rich parents, but that he couldn't afford to be a socialist. They wanted the LSE closed down be- cause by its existence it exploited the workers, he said, but he wasn't going to let any well- heeled socialist muck up his career for a trivial thing like world revolution. This speech re- ceived terrific applause from all except the actual revolutionaries, but the voting went against him. The poignancy of it all was that, as Mr Grimond pointed out in the Commons, our national supply of sociologists vastly ex- ceeds the demand—perhaps it is knowledge of this fact which breeds the good-natured reck- lessness which is such an amiable characteristic of the better-integrated sociology student.

'This small group . . . are the thugs of the academic world,' cried Mr Short. 'Already they have succeeded in closing LSE, whose former free and easy and delightful relationships are remembered by so many hon. members . . . It can only result in the slow rotting of institutions like the London School of Eco- nomics.'

Of course, to those who really do care about the maintenance of capitalism, nothing could be more delightful than the slow rotting of institutions like the LSE. No threat of any kind, so far as I can see, is posed by the revolu- tionaries' apparent intention to have it closed down. What the country is suffering from now is not the over-enthusiasm of a revolutionary student minority, but a regime that is the fruit of all those former free and easy and delight- ful relationships remembered by so many hon. members.