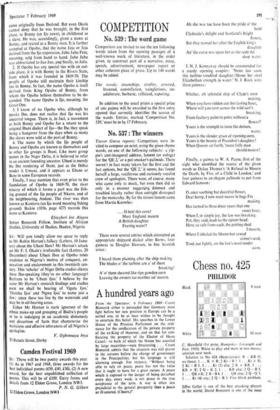 Trevor Grove reports: Competitors were in- vited to compose an octet, using the given rhyme words, on one of the following subjects : a yip- pie's anti-inaugural address, lament (or eulogy) for the VE 2,' or a pot-smoker's palinode. There weren't in fact many takers for the first and the last options, but the `QE 2,' it seems, has found herself a large, vociferous and curiously royalist crew of apologists. There were, of course, many who came only to mock, but even then did so only in a manner suggesting dimmed and troubled loyalty rather than outright disrespect for the monarchy. By far the tersest lament came from Martin Knowles :

There were several entries which attempted an appropriate shipyard dialect after Burns; four guineas to Douglas Hawson, in fine Scottish voice: I heard them plaining after the ship making The blades o' the turbine are a' of them breaking!

A' o' them sheared like ripe gowden corn Leaving the owners tae moither an' mourn. Ah she was tae have been the pride o' the hour Clydeside's delight and Scotland's bright flower, But they named her after the English king's daughter An' the curse was upon her as she rode the deep water.

I. N. J. Kennaway should be commended for a sturdy opening couplet: 'None too soon this turbine-troubled daughter/Shone her steel Elizabethan strength in water.' N. J. Rock wins three guineas : Whither, oh splendid ship of Clyde's own making, When you have ridden out this lasting hour, Where will you rove across the wild surf's breaking, From feathery palm to poles without a flower?

Yours is the strength to tame the demon, water, Yours is the slender grace of ripening corn, Yours is the beauty of Poseidon's daughter! When Queens set forth, 'twere folly man should mourn !.

Finally, a guinea to W. A. Payne, first of the eight who identified the source of the given words as Dylan Thomas's 'A Refusal to Mourn the Death, by Fire, of a Child in London,' and four guineas to an elegant palinode to pot from Edward Samson: 0, once soothing but deceitful flower, Dear hemp, I now must weave in bags I'm making, Has turned to three drear years that one sweet hour, When I, in simple joy, the law was breaking. Pot, they said, leads to the opium bead; Here, so safe from each, the potting shed I mourn, Where I inhaled the bloom but sowed crime's seed, Trod, not lightly, on the law's most tender corn.