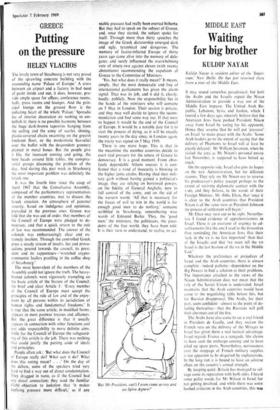 Putting on the pressure

The lovely town of Strasbourg is not very proud of the sprawling concrete building with the resounding name 'Palace of Europe.' A cross between an airport and a factory in bad need of paint inside and out, it does, however, pro- vide ample space for offices, conference rooms, halls, press rooms and lounges. And the prin- cipal lounge on the ground floor is the

pulsating heart of the whole 'Palace.' Sporadic fits of interior decoration do nothing to em- bellish it; there is no possible harmony between the huge dark-brown tapestries hanging from the ceiling and the army of scarlet, shining, plastic-covered chairs swarming on the greyish linoleum floor, or the modernistic bas-relief over the buffet with the despondent greenery planted in metal boxes. But the people give it life, the incessant coming and going, the, bent heads around little tables, the conspira- torial groups discussing the problem of the day. And during this past week in Strasbourg the most important problem was definitely the Greek one.

It was the fourth time since the coup of April 1967 that the Consultative Assembly,. composed of the parliamentary representatives of the member countries, met to discuss the Greek situation. An atmosphere of paternal severity, based on indulgence and optimism, prevailed in the previous ones. Greece was told that she was out of order, that members of the Council of Europe were pledged to de- mocracy, and that a quick return to the rule of law was recommended. The answer of the colonels was embarrassingly clear and ex- tremely insolent. Through the controlled Greek press a steady stream of insults, lies and provo- cations poured towards the council, its presi- dent and its rapporteurs—`wretched crypto- communist loafers prattling in the coffee shop of Strasbourg.'

The most benevolent of the members of the Assembly could not ignore the truth. The heavy- booted colonels were vigorously trampling on the basic article of the Statute of the Council, the brief and clear Article 3: 'Every member of the Council of Europe must accept the principles of the rule of law and of the enjoy- ment by all persons within its jurisdiction of human rights and fundamental freedoms.' It is true that the same article, in modified forms,. appears in most postwar treaties and alliances. But the- great difference is that it usually appears in connection with other functions and just adds respectability to more definite aims. v hik for the Council of Europe the safeguard- ing of this article is the job. There was nothing that could justify the putting aside of ideals and principles.

People often ask: 'But what does the Council of Europe really do? What can it do? What does this voting mean? . . On the day of the debate, some of the speakers tried very hard to find a way out of direct condemnation. They dragged in NATO, as if the Council had any direct connection; they used the familiar , cliche objection to isolation that 'it makes applying pressure more difficult,' as if any

visible pressure had really been exerted hitherto. But they had to speak on the subject of Greece, and, once they started, the subject spoke for itself. Through more than thirty speeches the image of the Greek dictatorthip emerged dark and ugly, tyrannical and dangerous. The memory of fascist-infected Europe of thirty years ago came alive into the memory of dele- gates, and surely influenced the overwhelming vote of ninety-two against eleven (with twenty abstentions) recommending the expulsion of Greece to the Committee of Ministers.

'Yes, but what does it really mean?' It means, simply, that the most democratic and free of international parliaments has given the alarm signal. That was its job, and it did it, clearly, loudly, publicly. Now the responsibility lies in the hands of the ministers who will convene on 5 May in London. Their session is private. and they may well decide to ignore the recom- mendation and find some way out. If that were to happen it would be the end of the Council of Europe. It would be a notable date for it to start the process of dying, as it will be exactly twenty years to the day since, in London again, the treaty was signed on 5 May 1949.

There is one more hope. This is that in the meantime the member countries decide to exert real pressure for the return of Greece to democracy. It is a good moment. From abso- lutely dependable Athens sources it is con- firmed that a wind of insecurity is blowing in the higher junta circles. Having shed their mili- tary garb without having gained a politician's image, they are relying on borrowed powers, on the fidelity of General Anghelis, now in full control of the army, and on the aid of the western world. 'All that is necessary for the forces of evil to win in the world is for enough good men to do nothing,' someone scribbled in Strasbourg, remembering wise words of Edmund Burke. They, the 'good men,' the ministers, the politicians, the presi- dents of the free world, they have been told. It is their turn to understand, to realise, to act.

But Mr President, can't I even come across and see Spiro Agnew?'