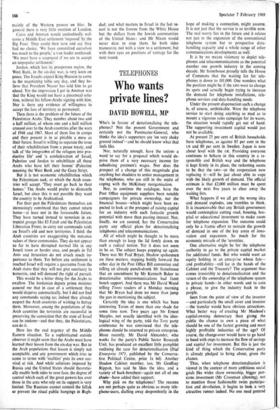 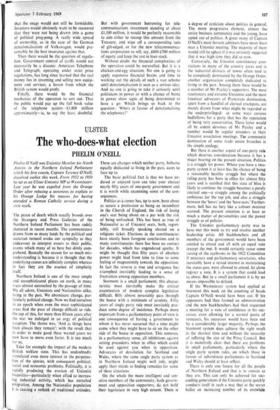 Who's in favour of denationalising the tele- phones? Not the present Government and certainly not the Postmaster-General, who thinks the idea's supporters are 'on very shaky ground indeed'—and he should know what that feels like.

Nor, naturally enough, have the unions a word to say for a proposal which would de- prive them of a very necessary income for subsidising postmen's wages. Nor does the prospect of a change of this magnitude give anything but shudders to senior management in the telephones, who are still in the midst of coping with the McKinsey reorganisation.

Nor, to continue the catalogue, have the Post Office equipment suppliers been notable campaigners for private ownership, nor the financial houses—which might have been ex- pected to look at the prospect of raising capital for an industry with such fantastic growth potential with more than passing interest. Nor, finally, we are assured, has the Conservative party any official plans for denationalising telephones and telecommunications.

All of which might be thought to be more than enough to keep the lid firmly down on such a radical notion. Yet it does not seem to be so. The subject keeps popping up again. There was Mr Paul Bryan, Shadow spokesman on these matters, stepping boldly forward the other day in the Post Office Bill committee and telling an already punch-drunk Mr Stonehouse that an amendment by Mr Kenneth Baker to denationalise telecommunications had front bench support. And there was Mr David Wood telling Times readers of a Monday morning that Mr Bryan had done no more than jump the gun in mentioning the subject.

Certainly the idea is one which has been interesting Tories of more than one shade for some time now. Two years ago Mr Ernest Marples, not usually identified with the ideo- logical wing of the party, told the Tory party conference he was convinced that the tele- phones should be returned to private enterprise. More recently, Mr David Alexander, who works for the party's Public Sector Research Unit, has produced an excellent little pamphlet outlining the case for denationalisation (Dial Enterprise 1971, published by the Conserva- tive Political Centre, price Is 6d). Another Shadow Cabinet member, too, Mr Geoffrey Rippon, has said he likes the idea, and a variety of back-bencheri—again not all of one shade—have added their support.

Why pick on the telephones? The reasons are not perhaps quite as obvious as many tele- phone-users, dialling away despondently in the hope of making a connection, might assume. It is not just that the service is so terrible now. The real worry lies in the future and it relates not just to the expansion of the conventional telephone system but to prospective data- handling capacity and a whole range of other communications developments as well.

It is by no means visionary to depict tele- phones and telecommunications as the potential number one growth industry in the coming decade. Mr Stonehouse proudly tells the House of Commons that the waiting list for tele- phones is down to 101,000. One wonders what the position might be if the GPO were to change its spots and actually begin trying to increase the demand for telephone installations, tele- phone services and data-handling needs.

Under the present dispensation such a change is, of course, unthinkable. Were the telephone service to start doing anything so mad as to mount a vigorous sales campaign for its wares, the situation would rapidly get out of hand. The supporting investment capital would just not be available.

At present 25 per cent of British households have telephones, as against 85 per cent in the us and 80 per cent in Sweden. Japan is now about level with the ux. Providing everyone continues to behave in this country in a re- sponsible and British way and the telephone is' kept firmly in its place, the reckoning seems to be that the GPO—or the corporation now replacing it—will be just about able to cope with the likely growth of demand. The official estimate is that £2,000 million must be spent over the next five years to clear away the waiting lists.

What happens if we all get the wrong idea and demand explodes, one trembles to think. It is inconceivable that any British government would contemplate cutting road, housing, hos- pital or educational investment to make room for telephone expansion. The outcome could only be a frantic effort to restrain the growth of demand in one of the key areas of inno- vation and expansion. So much for the economic miracle of the 'seventies.

One alternative might be for the telephone authority to go to the private capital market for additional funds. But who would want an equity holding in an enterprise whose fate— and profitability—still lay in the hands of the Cabinet and the Treasury? The argument thus comes irresistibly to denationalisation and the return of the ownership of the telephone system to private hands—in other words and to coin a phrase, to give the industry back to the people.

Seen from the point of view of the investor —and particularly the small saver and investor —the transfer would have obvious attractions. What better way of creating Mr Maeleod's capital-owning democracy than giving the public the chance to own a piece of what should be one of -the fastest growing and most highly profitable industries of the age? Of course, the change-over would have to go band in hand with steps to increase the flow of savings and capital for investment. But this is just the kind of thing which the Conservative party is - already pledged* to bring about, given the chance.

Thus, when telephone denationalisation is viewed in the context of more ambitious social goals like wider- share ownership, bigger pen- sions investment (Mr Crossman allowing), not to mention those fashionable twins participa- tion and devolution, it begins to look a very attractive runner indeed. No one need pretend that the snags would not still be formidable. Investors would obviously want to be reassured that they were not being drawn into a game of political ping-pong. A really wide spread of ownership, as in the case of the German denationalisation of Volkswagen, would pre- sumably be the best insurance against that.

Then there would be the question of regula- tion. Government control of tariffs would not necessarily be a disaster. American Telephone and Telegraph, operating under strict price regulations, has long since learned that the real money lies in inventing and selling new equip- ment and services, a lesson from which the British system would profit.

Finally, there would be the financial mechanics of the operation to sort out. That the public would pay up the full book value of the telephone system-11,800 million approximately—is, to say the least, doubtful. But with government borrowing for tele- communications investment standing at about £1,100 million, it would be perfectly reasonable to aim either to recoup this amount from the Treasury, and wipe off a corresponding sum of gilt-edged, or for the new telecommunica- tions corporation to sell, say, f600-£700 million of equity and keep the rest in loan stock.

Without doubt the financial complexities of the operation could be unravelled. But it is a chicken-and-egg situation. No one is going to apply expensive financial brains and time to working out the details of such a vast scheme until denationalisation is seen as a serious idea. And no one is going to take it seriously until politicians in power or with a chance of being in power show signs of being determined to have a go. Which brings us back to the question : Who's in favour of denationalising the telephones?'