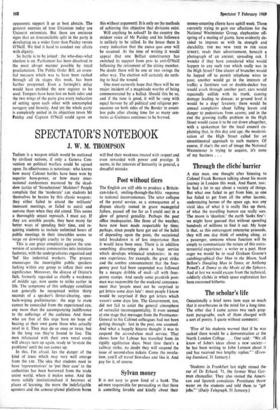 Tedium is a weapon which would be outlawed by civilised nations, if only a Geneva Con- vention on political warfare could be agreed upon. Its effectiveness is notorious: who knows how many Cabinet battles have been won by superior bore-power, or how many inter- national conferences mastered by the dead- slow tactics of `Stonebottom' Molotov? People complain that the 'moderate' tse students let themselves be beaten by this classic weapon: they either failed to attend the militants' incessant meetings, or failed to outsit and outvote them when they did attend. This seems a thoroughly unjust reproach, I must say. If they are sensible people, they have many far better ways of spending their time, and re- quiring students to include unlimited hours of public meetings in their timetables seems to verge on downright cruelty to the young.

This is one great complaint against the con- version of academic communities into imitation factories, with the undergraduates organised and 'led' like industrial workers. The process encourages the incorrigible public speakers lurking within any group to inflate their own significance. Moreover, the disease of Orator's Itch, formerly regarded as chiefly a weakness of middle age, now seems to strike earlier in life. The symptoms of this unhappy condition can generally be recognised within thirty seconds of a speaker's throat-clearing, spec- tack-wiping preliminaries: the urge to orate cannot be concealed from the experienced eye, any more than the accompanying indifference to the sufferings of the audience. And those who are free of this urge have no hope of beating at their own game those who actually revel in it. They may do so once or twice, but in the long run they're bound to lose. The men infatuated with their own vocal cords will always turn up again, ready to 're-state the problems' until the sun comes up.

In this, I'm afraid, lies the danger of the kind of truce which may very well emerge from the LSE. The idea that students need to have 'representatives' to 'put their case' to the authorities has been borrowed from the trade union world, where it makes sense. And the more solidly - institutionalised it becomes at places of learning, the more the indefatigable spouters and the armour-plated platform bores will find their weakness treated with respect and even rewarded with power and prestige. It seems, in the interests of humanity in general, a dreadful mistake.

The English are still able to produce a Britain- can-take-it, smiling-through-the-blitz response to national inconveniences. The utter collapse of the postal service, as a consequence of a dispute clearly rooted in grave managerial failure, passed off (so far as I could see) in a glow of general geniality. Perhaps the post office inadequacies, like those of the weather, have now been made respectable by time; perhaps, since people have got out of the habit of depending upon the posts, the occasional total breakdown is of less importance than it would have been once. There is in addition something disarming about a huge service which develops whimsical tendencies: in my own experience, for example, the great strike and the sombre announcement that the four- penny post had been suspended was followed by a meagre dribble of mail—all with four- penny stamps. And surely some prankish post- man was responsible for the weekend announce- ment that 'people must not be surprised to get letters some days late': most people I know would be surprised if they got letters which weren't some days late. The Government, too, did not fail to assist the general atmosphere of surrealist inconsequentiality. It even seemed at one stage that messages from the Postmaster- General to his Cabinet colleagues had not been getting through: lost in the post, one assumed. And what a happily bizarre thought it was to suspend the second-class mail service. That shows how far Labour has travelled from its rigidly egalitarian days. Next time there's a railway strike, no doubt they will suspend the issue of second-class tickets. Come the revolu- tion, you'll all travel first-class and like it. And pay for it, of course.

It is not easy to grow fond of a bank. The ad-men responsible for persuading us that there is something lovable and kindly about their money-counting clients have uphill work. Those currently trying to gain our affections for the National Westminster Group, elephantine off- spring of a mating of giants, have evidently de- cided to impress us with its strength and durability. THE BIG NEW TREE IN THE HIGH STREET, reads their advertisement, beneath a photograph of an ancient, spreading oak. I wonder if they have considered what would happen to any such tree which really was in the High Street? One cluster of branches would be lopped off to permit telephone wires to pass; another would go • in the interests of traffic; a furniture van or double-decker bus would crash through another part; cars would repeatedly collide with its trunk, causing damage leading to disease; at ground level it would be a dogs' lavatory; there would be annual complaints about falling leaves and danger to pedestrians from acorns; and in the end the growing traffic problem in the High Street would cause it to be cut down altogether, with a spokesman for the local council ex- plaining that, in this day and age, the moderni- sation of the High Street called for an unsentimental approach to such matters. Of course, if that's the sort of image the National Westminster is trying to acquire, it's none of my business . . .

Through the cliche barrier

A nice man, one thought after listening to Colonel Frank Borman talking about his moon journey in London this week. And fluent, too: he had a lot to ,say about a variety of things. But what one failed to get from him, as one has failed - to get from all the other laconic, understating heroes of the space age, was any vivid idea of what it is really like up there, of what the travelling human eye really sees. The moon is 'desolate; the earth 'looks fine': we might have guessed that without spending hundreds of millions to find it out My hope is that, as this extravagant enterprise proceeds, they will one day think of sending along. as a passenger, someone whose function will be simply to communicate the nature of this-extra- terrestrial experience: a writer or a poet. How eager we would be to read Graham Green's autobiographical Our Man in the Moon, Saul Bellow's Dangling Man in Space, or Anthony Powell's A Dance to the Music of the Spheres. And at last we would escape from the technical, soldierly clichds in which space exploration has been cocooned hitherto.

Occasionally a brief news item says so- much that it reverberates in the mind for a long time. The other day I came across two such preg- nant paragraphs, each of them charged with a sort of poetry. I quote without comment: `Five of his students warned that if he was sacked there would be a demonstration at the North London College . . One- said: "We all know of John's ideas about a new society— he has been writing to John Lennon about it and has received two lengthy replies." ' (Even- ing Standard, 31 January.) `Students in Frankfurt last night stoned the car of Dr Erhard, 71, the former West Ger- man chancellor. They also 'stoned the Ameri- can and Spanish consulates. Prostitutes threw water on the students, and told them to "get jobs."' (Daily Telegraph, 31 January.)