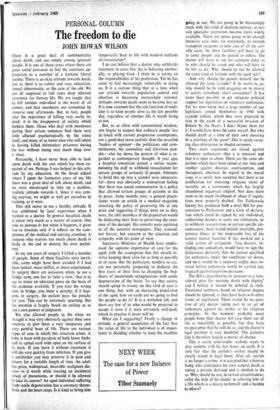 The freedom to die

There is a great deal of sentimentality about death, and not simply among ignorant people. It is one of those areas where there are great social pressures to feel the emotions ap- propriate to a. member of a humane liberal society. There is an okay attitude-towards death, just as there is to colour and race, education, sexual abnormality, or the care of the old. We are all supposed to feel some deep inherent reverence for human life. We are taught that to kill another individual is the worst of all crimes, and that murderers are tormented by remorse ever afterwards. But, in fact, people take the experience of killing very easily in deed; it is the disapproval of society which bothers them. Those who deal with murderers during their prison sentences find them very . little affected psychologically by the crime itself, and many of us know men who will admit to having killed defenceless prisoners during the war without losing very much sleep over it since.

Personally,. I have never been able to look upon death with the awe which has been ex- pected of me. Perhaps I was helped in this atti- tude by my education. At the Jesuit school where I spent the formative years of my life s there was a great deal of talk about death, and we were encouraged to take up a positive, realistic attitude towards it. Since it was com- ing anyway, we might as well get ourselves in training, as it were.

This still seems to me a healthy attitude. It was confirmed by later experience when I. trained as a doctor. In general- hospitals death is taken very much as a matter of course. One- tries to prevent it• but when it happens, it gives rise-.to emotion only if it reflects on the COM-. petence_of the medical and nursing attention. A surgeon who worries too much about death is likely in the end to destroy his own useful- ness.

In my ten years of surgery I killed a number- of people. Some of these fatalities were inevit- able, some might have been avoided if I had been luckier, more skilful, or more experienced. In surgery there are occasions when, to use a bridge term, one has to 'take a view,' that is to. - say to make an educated guess on the basis of the evidence available. If you take the wrong view in bridge, you incur a penalty; if it hap- pens in surgery, the patient pays the penalty for you. This can be extremely upsetting. But the emotion is largely based on anxiety as to one's own powers of judgment.

We also allowed people- to die when we_ thought it was very obviously against their own interests to give them a very temporary and very- painful lease of life. There are various types of case in which this situation • arises. A baby is born with paralysis of both lower limbs and its spinal cord wide open on the surface of its back. If- you leave it without treatment it will die very quickly from infection. If you give it antibiotics, you may preserve it in pain and misery for a variable length of time. An adult has gross, widespread, incurable malignant dis- ease—is it worth while treating an incidental. attack of pneunionia, or should it be allowed to take its course? An aged individual suffering. from senile degeneration has a coronary-throm- bosis and the heart stops. Is it kind to bring him temporarily back to life with modern methods of resuscitation?

I do not believe that a doctor who withholds treatment in cases like this is behaving unethic- ally, or playing God—I think he is taking on the responsibilities of his profession. Yet he has come to feel increasingly vulnerable in doing so. It is a curious thing that at a time when our attitude towards population control and abortion is becoming increasingly rational, attitudes towards death seem to become less so. It is now assumed that the sole function of medi- cine is to keep people alive to the last possible day, regardless of whether life is worth living or not.

But, as so often with conventional wisdom, one begins to suspect that ordinary people. less in touch with current progressive assumptions, are a good deal more realistic than the so-called `leaders of opinion'—the politicians and com- mitteemen, the journalists and television pun- dits—who lay down the pattern of what is re- garded as contemporary thought. A year ago, a hospital consultant posted a notice recom- mending his staff to withhold resuscitation for certain groups of seriously ill people. Attempts to build this up into a scandal were unsuccess- ful—there was obviously a widespread feeling that there was sound commonsense in a policy that allowed certain groups of patients to die in peace. Some months later, a general practi- tioner wrote an article in a medical magazine attacking the policy of preserving life at any price and suggesting if things went on as they were, the able members of the population would be dedicating their lives to preserving the exist- ence of the decrepit. His remarks were reprinted in all the national newspapers. They aroused, not horror, but concern at the situation and sympathy with his point of view.

Successive Ministers of Health have empha- sised the supreme importance of care for the aged, with the assumption that this should in- volve keeping them alive for as long as possible at all costs. But the politicians, needless to say, are not personally proposing to dedicate the best years of their lives to changing the bed- sheets of incontinent octogenarians with senile degeneration of the brain. To say that society should spend its money on this kind of care is one thing, but, with an increasing population of the aged, how on earth are we going to find the people to do it? It is a wretched job, and there are few of us who would be prepared to accept it even if it were extremely well-paid, which in practice it never will be.

What am I suggesting? Firstly a change in attitude, a general acceptance of the fact that the value of life to the individual is of impor- tance in deciding whether to keep the machine going or not. We are going to be increasingly stuck with this kind of decision anyway, as cer- tain specialist treatments become more widely available. There are never going to be enough intensive care units for everybody, or enough transplant surgeons to take care of all the suit- able cases. So these facilities will have to go to some people and be denied to others. The doctor will have to use his common sense as to who should be saved and who will have to be left to die. Why should he not be allowed the same kind of latitude with the aged sick?

And why should the patient himself not be allowed the same latitude? If he wants to go, why should he be kept dragging on in misery to satisfy somebody else's conscience? It has never been possible to get adequate political support for legislation on voluntary euthanasia. Yet we now know that a large number of our legislators armed themselves in 1940 with cyanide tablets, which they were prepared to take in the event of a successful invasion of Britain by the Nazis. I don t blame them for it; I would have done the same myself. But why should death at a time of their own choosing be a privilege of the great? This is surely carry- ing class distinction to absurd extremes.

Two main arguments are raised against voluntary euthanasia—that it is immoral and that it is open to abuse. These are the same ob- jections which have been raised at one time and another against divorce, contraception, and therapeutic abortion. In regard to the moral issue, it is surely now accepted that there is no justification for imposing religious views of morality on a community which has largely abandoned organised religion. Nor does there seem to be much likelihood of abuse if regula- tions were properly drafted. The Euthanasia Society has produced both a draft Bill for pre- sentation to Parliament and a form of declara- tion which could be signed by any individual, authorising doctors to carry out euthanasia, or to withhold resuscitation, in certain specific cir- cumstances; these would include incurable, pro- gressive illness or the irreparable loss of his normal mental faculties. It has worked out 'a valid system of safeguards Two doctors, in- cluding one consultant, would have to sign the declaration declaring that the patient qualified for euthanasia under the conditions set down, and there would be a statutory eighty days in- terval before euthanasia would be carried out, to guard against impulsive decisions.

The Bill is described by its sponsors as a 'con- sidered plan for meeting death with dignity' and I believe it should be debated as such. Emotional outbursts based on religious dogma should be ignored, as they have been with other forms of legislation. There would be no ques- tion of any doctor taking part in an act of euthanasia against his wishes or his religious principles. At the moment, probably most people hope their doctor will ease them out of life as mercifully as possible, but they have no guarantee that he will do so, and the doctor's legal position is very doubtful. The patient's fate is therefore largely a matter of chance.

This is surely undesirable, nobody wants to play roulette with his last hours on earth. It is only fair that the patient's wishes should be clearly stated in legal form. After all, suicide is no longer a crime: it is accepted that a human being who anticipates his own natural death is taking a private decision and is entitled to do so: Why should he not, in certain circumstances, enlist the help of his doctor in relieving him of a life which is a misery to himself and a burden to others?