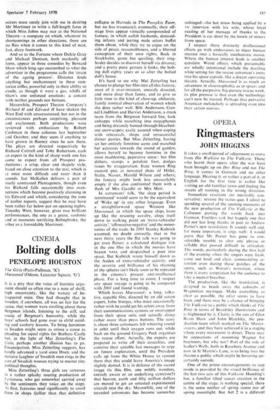 The Girls (Paris-Pullman, 'X') Marooned (Odeon, Leicester Square, 'U') It is a pity that the voice of feminist argu- ment should so often rise to a note of shrill, high uncertainty, like the warcry of be- leaguered mice. One had thought that in Sweden, if anywhere, all was set fair for the cause, that women were strolling about those Bergman islands, listening to the still, sad music of Bergman's humanity, while the boys' schools had gone over to child mind- ing and cookery lessons. To bring feminism to Sweden might seem as otiose a cause as pleading for equal rights for Barbara Castle but, in the light of Mai Zetterling's The Girls, perhaps another illusion has to go. Emancipation, Miss Zetterling suggests, has hardly advanced a yard since Ibsen, and the derisive laughter of Swedish men rings in the ears of Swedish women trying to muster tiny political thoughts.

Miss Zetterling's three girls are actresses in a rather splashy touring production of Lysistrata, who get somewhat carried away by the sentiments they voice on the stage. At first, fantasies tend significantly to assail them in shops (jollier than that definitive collapse in Harrods in The Pumpkin Eater, but no less traumatic); eventually, their off- stage lives appear virtually compounded of fantasy, in which oafish husbands, demand- ing infants and jeering male actors buffet them about, while they try to argue on the side of peace, .reasonableness, and a blurred conception of their own rights. Back in Stockholm, game but quailing, their ring- leader decides to discover herself via divorce; and a pretty puny gesture it looks, the bolt- ing doll eighty years or so after the bolted doll's house.

It's hard to see why Mai Zetterling has chosen to plunge her film into all this fantasy, most of it over-insistent, uneasily directed, and more dour than funny, and to give so little time to the kind of close-up, obdurate, faintly ironical observation of women which she does rather well. Bibi Andersson, Gun- nel Lindblom and Harriet Andersson, a crack team from the Bergman forward line, look unhappy while mouthing into megaphones and being dreamily hunted through bleached- out snowscapes; easily assured when coping with rehearsals, shops and unsuccessful dinner parties. But Miss Zetterling, having set her entirely feminine scene and marched her actresses towards the sound of gunfire, allows herself to become feminine in the most maddening, pejorative sense: her film dithers, stamps a petulant foot, dodges issues by exaggeration. Irate women fling custard pies at newsreel shots of Hitler, Stalin, Nasser, Harold Wilson and others; the fantasy might look less unassailably empty if she also confronted them with a flash of Mrs Gandhi or Mrs Meir.

In astronauts' talk, 'the sleep period is terminated' would seem to be the equivalent of 'Wake up' in any other language. Even a straightforward space Western like Marooned, in which the space ships loom up like the rescuing cavalry, clogs itself down to walking point on 'extra-vehicular activity', 'affirmative-negative' and the mono- tonies of the trade. In 2001 Stanley Kubrick assumed, no doubt correctly, that in the next thirty years the flat talk was going to get even flatter; a calculated dialogue risk in the one film in which the movies have beaten NASA and despatched a poet into space. But Kubrick wrote himself down as the Auden of extra-vehicular activity, and the severity and brilliance of his rhyming of the spheres isn't likely soon to be repeated in the cinema's present anti-intellectual phase. For a long time to come, I suspect any space voyage is going to be compared with 2001 and found wanting.

Which leaves Marooned: a long, talka- tive, capable film, directed by an old action expert, John Sturges, who must occasionally rather wish he could get his actors away from their communications systems or unstrapped from their space suits and actually doing rather more than press buttons. The story is about three astronauts left whizzing round in orbit until their oxygen runs out, while back on the ground Gregory Peck organises the rescue effort. Actually, the experts are prepared to write off their casualties, and contrive their suitable last messages to urge on future exploration, until the President calls up from the White House to remind them that this could leave America's image slightly dented. It is in defence of the sacred image (is this film, one mildly wonders, entirely aware of an underlying cynicism?) that heaven, earth and fifty million dollars are moved to get an untested experimental aircraft into the sky. Meanwhile, one of the stranded astronauts has become somewhat

unhinged—the last straw being applied by a TV interview with his wife, whose loyal

reading of her message of thanks to the President is cut short by the howls of misery from space.

I suspect these distinctly disillusioned effects go with endeavours to inject human interest into a basically mechanistic movie. Where the human interest leads is another question. Weird effects which presumably are wholly intentional include the dazzling white setting for the rescue astronaut's entry into his space capsule, like a dream operating theatre. Actually, Marooned -is as much an adventure in claustrophobia as in space; and for all the purposive, big-picture rescue work. its plot premise is that even the technology can't now be trusted. Perhaps that pervasive American melancholy is spreading even into their action movies.