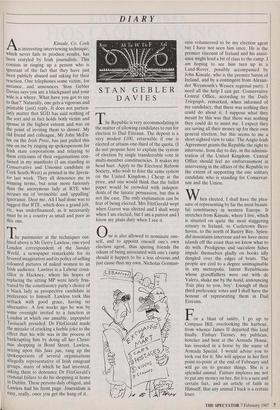 AKinsale, Co. Cork n interesting interviewing technique, which never fails to produce results, has been restyled by Irish journalists. This consists in ringing up a person who is Ignorant of the fact that they have just been publicly abused and asking for their reaction. One telephones some victim, for instance, and announces 'Stan Gebler Davies says you are a blackguard and your wife is a whore. What have you got to say to that?' Naturally, one gets a vigorous and Printable (just) reply. It does not particu- larly matter that SGD has said nothing of the sort and in fact holds both victim and spouse in the highest esteem and was on the point of inviting them to dinner. My old friend and colleague, Mr John McEn- tee on the Irish Press, has just pulled this one on me by ringing up spokespersons for Irish state corporations and relaying to them criticisms of their organisations con- tained in my manifesto (I am standing as Conservative and Unionist candidate in Cork South-West) as printed in the Specta- tor last week. They all denounce me in Winning terms, but none more furiously than the anonymous lady at RTE who accuses me of 'invincible' and 'appalling' Ignorance. Dear me. All I had done was to suggest that RTE, which does a grand job, etc, was underfinanced, as it necessarily must be in a country as small and poor as this one.

The pastmaster at the techniques out- lined above is Mr Gerry Lawless, one-eyed London correspondent of the Sunday World, a newspaper remarkable for its fevered imagination and its policy of selling coloured pictures of naked women to an Irish audience. Lawless is a Labour coun- cillor in Hackney, where his hopes of replacing the sitting MP were lately frus- trated by the constituency party's choice of a black lady as prospective candidate in preference to himself. Lawless took this setback with good grace, having no alternative. A few weeks ago he was by some oversight invited to a function in London at which our amiable, unpopular Taoiseach presided. Dr FitzGerald made the mistake of cracking a feeble joke to the effect that his wife was in the process of bankrupting him by doing all her Christ- mas shopping in Bond Street. Lawless, seizing upon this faux pas, rang up the spokespersons of several organisations allegedly representative of Irish emigrant groups, many of which he had invented, asking them to denounce Dr FitzGerald's criminal failure to do his shopping at home In Dublin. These persons duly obliged, and Lawless had his front page. Journalism is easy, really, once you get the hang of it. The Republic is very accommodating in the matter of allowing candidates to run for election to Dail Eireann. The deposit is a very modest £100, returnable if one is elected or attains one-third of the quota. (I do not propose here to explain the system of election by single transferrable vote in multi-member constituencies. It makes my head hurt. Apply to the Electoral Reform Society, who wish to foist the same system on the United Kingdom.) Cheap at the price, and one would think that the ballot paper would be crowded with indepen- dents of the lunatic persuasion, but this is not the case. The only explanation can be fear of being elected. Mrs FitzGerald wept when Garret was elected and I shall weep when I am elected, but I am a patriot and I know my plain duty when I see it.

One is also allowed to nominate one- self, and to appoint oneself one's own election agent, thus sparing friends the odium of being associated with one's camp should it happen to be a less obvious and just cause than my own. Nicholas Gorman- ston volunteered to be my election agent but I have not seen him since. He is the premier viscount of Ireland and his assist- ance might lend a bit of class to the camp. I am hoping to see him turn up in a Land-Rover, possibly accompanied by John Kinsale, who is the premier baron of Ireland, and by a contingent from Alexan- der Weymouth's Wessex regional party. I need all the help I can get. Conservative Central Office, according to the Daily Telegraph, remarked, when informed of my candidacy, that there was nothing they could do about it. I suppose what they meant by this was that there was nothing they could do to assist me. I expect they are saving all their money up for their own general election, but this seems to me a short-sighted view to take. The Anglo-Irish Agreement grants the Republic the right to intervene, from day to day, in the adminis- tration of the United Kingdom. Central Office should feel no embarrassment at intervening in the affairs of the Republic to the extent of supporting the one solitary candidate who is standing for Conservat- ism and the Union.

When elected, I shall have the plea- sure of representing by far the most beauti- ful constituency in western Europe. It stretches from Kinsale, where I live, which is situated on quite the most staggering estuary in Ireland, to Castletown Bere- haven , to the north of Bantry Bay. Splen- did mountains intervene and we have more islands off the coast than we know what to do with. Prodigious and succulent fishes impale themselves gladly on hooks idly dangled over the edges of boats. The people are civil to a degree unimaginable in any metropolis. Intent Republicans whose grandfathers were out with de Valera, shake me by the hand, announcing `Fair play to you, boy'. Enough of their third preference votes and I shall have the honour of representing them in Dail Eireann.

For a blast of sanity, I go up to Compass Hill, overlooking the harbour, from whence James II departed this land finally. Finbarr Tierney, my publican, hotelier and host at the Armada House, has invested in a horse by the name of Armada Special. I would advise you to look out for it. She will appear in her first point-to-point at the end of February and will go on to greater things. She is a splendid animal. Finbarr implores me not to put any money on her, for it is a sure and certain fact, and an article of faith in Himself, that any animal I back is a certain loser.