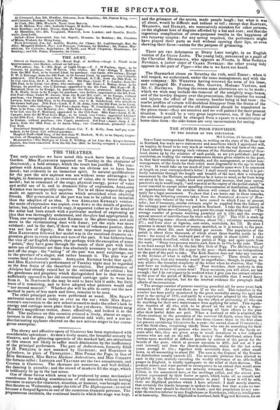 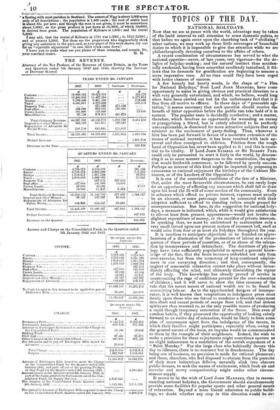 Sin-Your correspondent HERITOR, in writing on the state of the Poor-law in Scotland, has made some statements and assertions which I apprehend will, on inquiry, be found to be very much at variance with the real facts of the case. I have latterly been perusing such volumes of the Statistical Account of Scot- land, drawn up by the minister of each pariah, as are yet published ; and my conviction, on reading the various statements therein given relative to the poor, is, that their condition is most deplorable, and the management, or rather non- management, of the funds for their relief, most disgraceful to the age in which we live. It would take up too much of your valuable space were I to comment at length on your correspondent's letter : I shall merely remark, that it is per- fectly notorious through the length and breadth of the land, that a voluntary assessment by the Heritors, on themselves be it borne in mind, so far from being set about in the easy, simple, kind and patriarchal manner, that your corres- pondent's style would imply, "and repeated at the expiry of the period stated," is never resorted to except under appalling circumstances of destitution, and from an apprehension that the extreme distress will compel the Kirk-Session to apply for a legal assessment. To show that I am borne out in these remarks, 1 subjoin the following extracts taken from the Statistical Account of Boss- shire, the only volume of the work I have named to which I can at present refer ; but if necessary, similar extracts might be supplied from the history of the unhappy poor of almost every parish in Scotland. I take the first parish in the volume before me-Cromarty, and quote the exact words of the text. "The average number of persons receiving parochial aid is 150; and the average annual amount of contributions for their relief is 1721." The 1721. is made up of the following sums: church-collections, about 701.; voluntary assessments, 27/. ; and from alms or legacies, scat-rents, mortcloth, &c. 751. By alms I presume is meant the interest of money mortified, as it is termed, to thepoor. This gives about 23s. each individual per annum. The population of the parish is about three thousand, of which about three-fourths reside in the town : the rental of the landward part of the parish is about 3,3001. I take the next parish described, which is the parish of Nigg, and again quote from the work. " Sixty-two persons receive each from 4s. to 10s. in the year. There is no fund except 201. left by the late Mrs. Gair of Nigg. The Heritors have of late been INDUCED to give 301. a-year to the poor : there seems no indisposition on the part of the poor to take. The Kirk-Session does not take any concern in the division of what is called, the poor's-money." These details are so naively given, that any remarks would be superfluous ; though, in passing, we may admire the innocent simplicity of the writer when he observes, that " the poor have no indisposition to take." Poor wretches, their modesty in this respect is put to no very severe trial ! These accounts, you will allow, are bad enough ; but I do not expect to be credited when I give you the extract relative to the poor of the parish of Kiltearn : it is so incredible that I would fancy there was some misprint, but for the internal evidence the paragraph itself affords of its correctness.

" The average number of persons receiving parochial aid for some years back amounts to 63. At present there are 57 on the roll. This reduction in the number has been partly occasioned by the great mortality among the aged and poor in the spring of 1837, and partly by a regulation adopted by the Heritors and Session in that same year, which has the effect of preventing all who can do anything for their own maintenance from applying for relief. This regula- tion requires of' all who wish to be placed on the roll to sign a dispo- sition in favour of the Kirk-Session, leaving all their effects to the poor after their lawful debts are paid. When a husband or wife is admitted, the effects continue in the possession of the survivor till death, when they fall to the Session. The poor are divided into three classes: those in the first class (at present containing 14) receive 8s. a-year; the second class of 13 receive 6s.; and the third class, comprising chiefly those who can do something for their own support, contains 30 persons who receive 3s. If any of the funds re- main after this, they are given away in small donations to a few indigent persons who are not on the roll. The money thus distributed, arises from various sums mortified at different periods by natives of the parish for the benefit of the poor, which at present amounts to 400/., laid out at 5 per cent interest:; and from the church-collections, which for the last seven years average 4L 11x.; together with mortcloth dues, and other small sums, in all amounting to about 281. The sum at the disposal of the Session for distribution usually exceeds 171. The miserable pittance thus allowed to each in the year, scarcely exceeding the weekly allowance of an able-bodied pauper in England, is totally inadequate to the relief of their distress. The greatest misery and want prevail in consequence to an extent that would seem incredible to those who have not actually witnessed them." Where, Mr. Editor, is the assessment here, or the meetings called, and the absent pro- prietors represented by their factor or agent, which looks all so smooth and delightful in the Heritor's communication to you? I know it will be said, these are Highland parishes which I have selected : I shall merely observe, that certainly the Gaelic language is spoken in them; but that seems no rea- son why the poor should be starved to death ; and the proprietors do not con- sider themselves inferior to any Englishman or Scotchman, either in intelligence or in humanity. Moreover, Highland or Lowland, both Nigg and Kiltearn, are on a footing with most parishes in Scotland. The extent of Nigg is about 5,000 acres only of all descriptions ; the population is 1,400 souls ; the rent of amble land is about 35s. per acre; and though the rent is not given, it must be somewhere about 5,0001., as the gross produce is put down at 16,3801., of which 10,0001. is derived from grain. The population of Kiltearn is 1,600; and the rental 5,300/. I may add, that the rental of Kiltearn in 1791 was 1,500/. ; in 1810 3,068/ ; and at present 5,3001. Yet these are the proprietors who disgracefully shirk giving any assistance to the poor, and, as your paper of this week shows, cry out for an "equitable adjustment " in case their rents come down I leave you to make what use you please of these remarks, and remain, Sir,