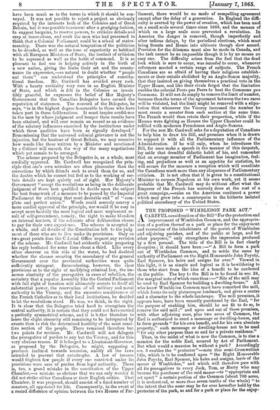 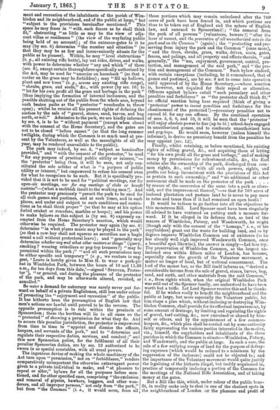 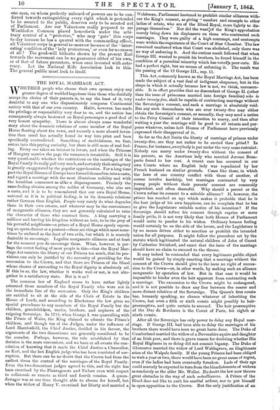 Page 14, 7 January 1865 — THE PROPOSED " WIMBLEDON PARK ACT." A CAREFUL consideration of the
Close

THE PROPOSED " WIMBLEDON PARK ACT." A CAREFUL consideration of the

So naive a demand for autocracy was surely never put for- ward on behalf of a private Englishman, still less under colour of promoting the "enjoyment and recreation" of the public. It has hitherto been the presumption of English law that men's actions are lawful until proved to be the reverse. The opposite presumption is to rule within the precincts of Spencerdom ; there the burthen will lie in all cases on the "protected" of showing a permission for what they do. And to secure this peculiar jurisdiction, the protector is empowered from time to time to "appoint and dismiss the officers, keepers, and servants of the park," and to " determine and regulate their respective duties, services, and conduct ;" and this new Spencerian police, for the fulfilment of all their peculiar Spencerian duties, are by sec. 13 authorized to be sworn in as special constables, with all usual powers. The ingenious device of making the whole machinery of the Act turn upon " permission," not on " forbiddance," renders comparatively unimportant the otherwise extravagant power given to a private individual to make, and " at pleasure to repeal or alter," bylaws for all the purposes before men- tioned, and for other specified ones, comprising " the exclusion and removal of gipsies, hawkers, beggars, and other wan- derers, and all improper persons," not only from "the park," but from " the Common " (i. e., it would seem, from all those portions which may remain uninclosed after the 700 acres of park have been fenced in, and which portions are thus to be taken out of England and the sphere of English law, and annexed to Spencerland) ; " the removal from the park of all persons" (volunteers, beware !) "after the hour of sunset, and the prevention of all unauthorized acts in the park and on the Common " (again) ; the " protecting and pre- serving from injury the park and the Common " (once more), " and the trees, shrubs, grass, walks, drives, seats, gates, fences, and palings, and all property and effects therein, " and generally," the "use, enjoyment, government, control, pro- tection, and management of the said park," and " the pro- tion and management of the Common." Such bylaw sindeed, with certain exceptions (including, be it remembered, that of games and pastimes), are by sec. 8 not to come into operation until approved of by the Home Secretary,—whose sanction is, however, not required for their repeal or alteration. Offences against bylaws entail " such pecuniary and other penalties and forfeitures" as " the protector shall think fit," no official sanction being here required (think of giving a- ' protector' power to invent penalties and forfeitures for the- chastisement of the protected!)—pecuniary penalties not to exceed Si. for any one offence. By the combined operation of secs. 5, 6, 8, and 10, it will be seen that the protector' will enjoy absolute power to fine (up to Si.) school-boys engaged in unauthorized games, and to confiscate unauthorized bats and peg-tops. He would seem, however (unless himself the informer), to derive no pecuniary benefit from the penalties he may appoint (sec. 12). Finally, whilst retaining, as before mentioned, his existing rights of selling gravel, &c., and acquiring those of letting, "for his own profit all the grass and herbage," and of making money by permissions for refreshment-stalls, &c., the Earl retains also the ownership of the park, discharged from com- mon rights, &c., and " with all such powers, rights, and profits not being inconsistent with the provisions of this Act as pertain to such ownership ;" and "no additional or other- assessment shall be made on the protector of the park . . . . by reason of the conversion of the same into a park as afore- said, and the improvement thereof,"—so that for 709 acres of inclosed plantation and pasture land he is never to pay more in rates and taxes than if it had remained an open heath !

It would be tedious to go further into all the objections to- this monstrous Bill. Lord Spencer must have been singularly ill-advised to have ventured on putting such a measure for- ward. If it be alleged in its defence that, as lord of the manors of Wimbledon, Putney, and Wandsworth, he might (though only with the consent of the " homage," i. e., of his copyholders) grant out the waste for building land, and so by degrees improve Wimbledon Common out of existence (as he has already well nigh improved Wandsworth Common, once a beautiful spot likewise), the answer is simply—Let him try. The preservation of Wimbledon Common, as the largest un- inclosed area within fifteen miles of London, has become, especially since the growth of the Volunteer movement, a matter no longer of local, but of national concernment. The lord of the manor has, as the Bill itself informs us, "derived a considerable income from the sale of gravel, stones, turves, bog, sand, and earth, and other materials from the said Common," i. e., from rights which, when the original Wimbledon Park was sold out of the Spencer family, are understood to have been worth but a trifle. Let Lord Spencer receive this and be thank- ful. If he wishes really to benefit the neighbourhood and the. public at large, but more especially the Volunteer public, let him shape a plan which, without inclosing or destroying Wim- bledon Common, shall provide for its effectual improvement, by some amount of drainage, by limiting and regulating the rights of gravel, turf-cutting, &c., now exercisedfor abused by him- self or others, and by the appointment of a few common- keepers, &c., which plan shall be carried out by some authority fairly representing the various parties interested in the matter, viz., himself, the copyholders and inhabitants of the three parishes in which the Common is situate—Wimbledon, Putney, and Wandsworth, and the public at large. In such a case, the sale of a few outlying scraps of land for the purpose of defray- ing expenses ( which would be reduced to a minimum by the suppression of the inclosure) could not be objected to ; and the importance of the Volunteer movement would quite justify the legalizing of the hitherto illegal, but tacitly acquiesced in, practice of temporarily inclosing a portion of the Common for the meetings of the National Rifle Association, and of taking money at the gates. But a Bill like this, which, under colour of the public bene- fit, in reality seeks only to shut in one of the choicest spots in the neighbourhood of London or the pleasure and profit of one man, on whom perfectly unheard-of powers are to be con- ferred towards extinguishing every right which is pretended to be assured to the public, deserves only to be scouted out of Parliament. Are our Volunteers really prepared to see Wimbledon Common placed henceforth under the arbi- trary control of a "protector," who may gate' this corps to-day because he has a quarrel with the commanding officer, all Volunteer corps in general to-morrow because of the ' inter- esting' condition of the lady protectress,' or even for no reason at all ? The good-will hitherto shown by the present Earl towards the movement can be no guarantee either of his own, or of that of future protectors, when once invested with auto- cracy. Let the National Rifle Association look to this. The general publio must look to itself.