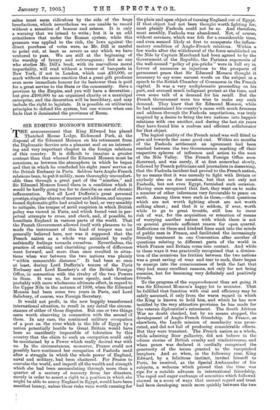 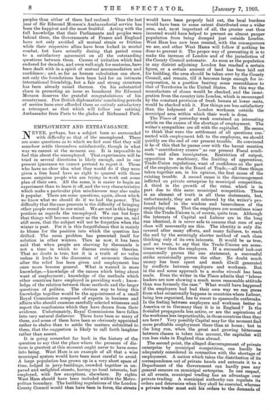 Richmond Park, at the disposal of Sir Edmund Monson on his retirement from the Diplomatic Service sets a pleasant seal on an interest- ing and very important chapter in the foreign relations of this country. It is difficult to imagine a greater contrast than that whereof Sir Edmund Monson must be conscious, as between the atmosphere in which he began and that in which he concluded his eight years' service at the British Embassy in Paris. Seldom have Anglo-French relations been, to put it mildly, more thoroughly uncomfort- able than through a great part of the "nineties," and Sir Edmund Monson found them in a condition which it would be hardly going too far to describe as one of chronic inflammation. Not all Lord Dufferin's great personal prestige, singular charm of manner and address, and unques- tioned diplomatic gifts had availed to heal, or very sensibly to mitigate, the temper of acrid suspicion in which British policy was viewed in Paris, and which found vent in per- petual attempts to cross, and check, and, if possible, to humiliate England in various parts of the world. That the French Government allowed itself with pleasure to be made the instrument of this kind of temper was not generally believed here, nor was it supposed that the French nation as a whole was animated by really unfriendly feelings towards ourselves. Nevertheless, the practice of seeking and cherishing grounds of difference went forward, and more than once resulted in situa- tions when war between the two nations was plainly "within measurable distance." It had been so once at least, during Lord Dufferin's tenure of the Paris Embassy and Lord Rosebery's of the British Foreign Office, in connection with the rivalry of the two Powers in Siam. It was so, far more openly, and therefore probably with more wholesome ultimate effect, in regard to the Upper Nile in the autumn of 1898, when Sir Edmund Monson had. been some two years in Paris, and Lord Salisbury, of course, was Foreign Secretary.

It would not profit, in the now happily transformed international situation, to recall in any detail the circum- stances of either of those disputes. But one or two things seem worth observing in connection with the second of them. In any case, the continued military occupation of a post on the river which is the life of Egypt by a nation potentially hostile to Great Britain would have been so manifestly impossible of toleration by this country that the claim to such an occupation could only be maintained by a Power which really desired war with us. In the circumstances, moreover, France could not possibly have continued her occupation of Fashoda until after a struggle in which the whole power of England, naval and military, had been shattered. For France to convulse the world, and imperil all the wealth and strength which she had been accumulating through more than a quarter of a century of recovery from her disasters, merely in order to assert a right to a position in which she might be able to annoy England in Egypt, would have been manifest lunacy, unless those risks were worth running for If that object had not been thought worth fighting for, most plainly Fashoda could not be so. And therefore, most sensibly, Fashoda, was abandoned. Not, of course, without soreness, which was felt for a considerable time, and even seemed likely at first to exasperate the inflam- matory condition of Anglo-French relations. Within a few weeks after the withdrawal of the force established on the Nile by Captain Marchand had been agreed to by the Government of the Republic, the Parisian exponents of the well-named "policy of pin-pricks" were in full cry in favour of measures so injurious to the prospects of permanent peace that Sir Edmund Monson thought it necessary to say some earnest words on the subject in a speech to the British Chamber of Commerce in the French capital. It was a very undiplomatic proceeding on his part, and aroused much indignant protest at the time, and even some talk of a demand for his recall. But the French Government were too wise to make any such demand. They knew that Sir Edmund Monson, while he had maintained his country's cause with much firmness and address through the Fashoda negotiations, was truly inspired by a desire to bring the two nations into happier relations with one another, and during the last six years they have found him a zealous and efficient collaborator for that object.

The logical quality of the French mind was well fitted to give aid. towards the same good end. Within six months of the Fashoda settlement an agreement had been reached between the two Governments marking off their respective spheres of influence and action to the west of the Nile Valley. The French Foreign Office soon discerned, and was surely, if at first somewhat slowly, followed by French politicians and journalists in discerning, that the Fashoda incident had proved to the French nation, by no means that it was unready to fight with Britain or anybody else on due occasion, but that not only not Fashoda, but not even Egypt, furnished such occasion. Having once recognised that fact, they went on to make a number of other inferences very favourable to peace on earth. Among them were such as these,—that questions which are not worth fighting about are not worth sulking about ; and that it is seldom, if ever, worth while to go to great trouble, still less to incur risk of war, for the acquisition or retention of means of worrying another nation with which there is not on general grounds sufficient reason for open quarrel. Reflections on these and kindred lines sank into the minds of public men in France, and facilitated the increasingly friendly treatment in one Convention after another of questions relating to different parts of the world in which France and Britain come into contact. And. while in these ways it was practically recognised that a diminu- tion of the occasions for friction between the two nations was a great saving of wear and tear to each, there began to emerge into the consciousness of both the fact that they had many excellent reasons, not only for not being enemies, but for becoming very definitely and positively friends.

To the progress of the rapprochement thus set going it was Sir Edmund Mormon's happy lot to minister. That he fulfilled that function with zeal and efficiency may be safely assumed, if only from the warm regard in which the King is known to hold him, and which he has now testified by the very attractive provision he has made for the veteran diplomatist's retirement. The South African War no doubt checked, but by no means stopped, the development of Anglo-French friendship. In France, as elsewhere, the Leyds mission of mendacity was prose- cuted, and did not fail of producing considerable effects. But they were transient. The French nation as a whole, while admiring Boer gallantry, did not believe in the odious stories of British cruelty and vindictiveness, and when peace was declared it cordially recognised the generosity of the terms granted to the vanquished burghers. And so when, in the following year, King Edward, by a felicitous instinct, invited himself to Paris, he received, as the Special Ambassador of his subjects, a welcome which proved that the time was ripe for a notable advance in international friendship. The rapid and eager exchange of amenities which followed showed in a score of ways that mutual regard and trust had been developing much more quickly between the two peoples than either of them had realised. Thus the last year of Sir Edmund Monson's Ambassadorial service has been the happiest and the most fruitful. Acting with the full knowledge that their Parliaments and peoples were behind them, the Governments of France and. England have not only avoided all mutual strain or friction while their respective allies have been locked in mortal combat, but have actually during that period come to a satisfactory agreement on all the outstanding questions between them. Causes of irritation which had endured for decades, and even well-nigh for centuries, have been dealt with in a spirit of mutual accommodation and confidence ; and, so far as human calculation can show, not only the foundations have been laid for an intimate international friendship, but a fair and strong structure has been already raised thereon. On his substantial share in promoting an issue so beneficent Sir Edmund Monson deserves the grateful congratulations of his countrymen. Few British diplomatists' concluding periods of service have ever afforded them so entirely satisfactory a retrospect as that which will follow our retiring Ambassador from Paris to the glades of Richmond Park.