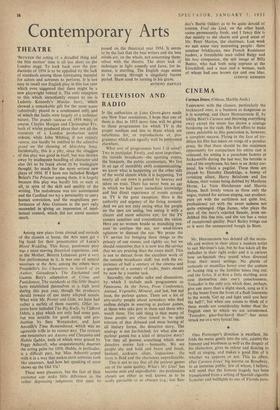 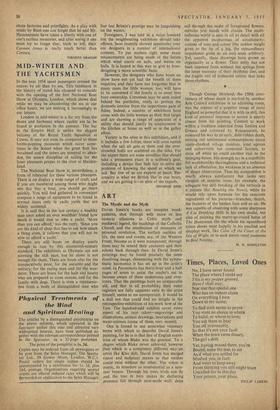 TAMPERING with the classics, particularly the hackneyed ones, is a business as dangerous as it is tempting, and Oscar Hammerstein II, by taking Bizet's Carmen and throwing everything away except the music has shown a courage bordering on the rash. His first effort to make opera palatable to, this generation is, however, a complete success. Flying in the face of tra- dition his film has taken on wings. of a peculiar grace. So that there should be the minimum opportunity for comparison his entire cast is coloured, his setting is a parachute factory at Jacksonville during the last war, his heroine is one of the employees, his hero is an Army cor- poral, his villain a pugilist. These three are played by Dorothy Dandridge, a honey of ravishing allure, Harry Belafonte and Joe Adams, their voices being dubbed by Marilynn Horne, Le Vern Hutcherson and Marvin Hayes. Such lovely voices as these only the negro, trained for serious singing, can produce; pure yet with the earthiness not quite lost, professional yet with the sweet sadness not quite expunged. Olga James, who plays the part of the hero's rejected fianc6e, joins un- dubbed this fine trio, and she too has a voice of exceptional quality. Pearl Bailey brings out as it were the unsuspected boogie in Bizet.

Mr. Hammerstein has deleted all the recita- tifs and written in their place a modern script

to suit Merimee's tale, but he has taken all the melodies in their right order and it is curious how un-Spanish they sound when divorced from their usual settings. No ghosts of castanets or mantillas hover over the canteen or boxing ring as the familiar tunes ring out, and the lyrics, if at .first a little startling, soon ease themselves into one's consciousness. Toreador is the only aria which does, perhaps, give one more than a slight shock, sung as it is by the boxer from the front of a flash limousine to the word* 'Get up and fight until you hear the bell!', but when one comes to think of it these words are considerably better than the English ones to which we are accustomed. 'Toreador, guar-har-har-d thee!' , has never struck me as a very lyrical line,

Otto Preminger's direction is excellent, He folds the music gently into the text, accents the humour and brashness as well as the despair of his characters, gives us colour and dancing as well as singing, and makes a good film of it whether we approve or not. This he offers, after Carmen Jones' big success on Broadway. to an immense public, few of whom, I believe. will mind that the famous tragedy has been transplanted from a setting of Spanish cigarette factories and bullfights to one of Florida para. chute factories and prizefights. As a play with music by Bizet one can forget that he and Mr. Hammerstein have taken a liberty with one of one's earliest memories, and after seeing it one must try to forget that, truth to tell, their Carmen Jones is really much better than Carmen.