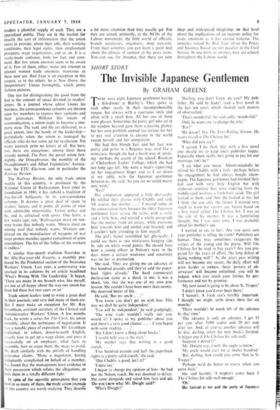 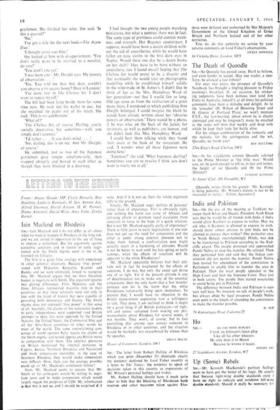 THERE were eight Japanese gentlemen having a fish-dinner at Bentley's. They spoke to each other rarely in their incomprehensible tongue, but always with a courteous smile and often with a small bow. All but one of them wore glasses. Sometimes the pretty girl who sat in the window beyond gave them a passing glance, but her own problem seemed too serious for her to pay real attention to anyone in the world except herself and her companion.

She had thin blonde hair and her face was pretty and petite in a Regency way, oval like a miniature, though she had a harsh way of speak- ing—perhaps the accent of the school, Roedean or Cheltenham Ladies' College, which she had not long ago left. She wore a man's signet-ring on her engagement finger and as I sat down at my table, with the Japanese gentlemen between us, she said, `So you see we could marry next week.'

Her companion appeared a little distraught. He refilled their glasses with Chablis and said, 'Of course, but mother . . I missed some of the conversation then, because the eldest Japanese gentleman leant across the ta'ale, with a smile and a little bow, and uttered a whole paragraph like the mutter from an aviary, while everyone bent towards him and smiled and listened, and I couldn't help attending to him myself.

The girl's fiancé resembled her physically. I could see them as two miniatures hanging side by side on white wood panels. He should have been a young officer in Nelson's navy in the days when a certain weakness and sensitivity was no bar to promotion.

She said. 'They are giving me an advance of five hundred pounds, and they've sold the paper- back rights already.' The hard commercial declaration came as a shock to me; it was a shock, too, that she was one of my own pro- fession. She couldn't have been more than twenty. She deserved better of life.

'You know you don't get on with him. This way we shall be quite independent.'

'You will be independent,' he said grudgingly.

The wine trade wouldn't really suit you, would it? I spoke to my publisher about you and there's a very good chance . . . if you began with some reading. . .

'But I don't know a thing about books.'

'I would help you at the start.'

'My mother says that writing is a good crutch. . .

'Five hundred pounds and half the paperback rights is a pretty solid crutch,' she said.

I began to change my opinion of him—he had not the Nelson touch. He was doomed to defeat. She came alongside and raked him fore and aft. 'DO you know what Mr. Dwight said?'

'Who's Dwight?' 'Darling, you don't listen, do you? My pub- lisher. He said he hadn't read a first novel in the last ten years which showed such powers of observation.'

'That's wonderful,' he said sadly, 'wonderful.' 'Only he wants me to change the title.'

'He doesn't like The Ever-Rolling Stream. He wants to call it The Chelsea Set.'

`I agreed. I do think that with a first novel one should try to keep one's publisher happy. Especially when, really, he's going to pay for our marriage, isn't he?'

'I see what you mean.' Absent-mindedly he stirred his Chablis with a fork—perhaps before the engagement he had always bought cham- pagne. The Japanese gentlemen had finished their fish and with very little English but with elaborate courtesy they were ordering from the middle-aged waitress a fresh-fruit salad. The girl looked at them, and then she looked at me, but I think she saw only the future. I wanted very much to warn her against any future based on a first novel called The Chelsea Set. I was on the side of his mother. It was a humiliating thought, but I was over sixty, I was probably about his mother's age.

I wanted to say to her: Are you quite sure your publisher is telling the truth? Publishers are human. They may sometimes exaggerate the virtues of the young and the pretty. Will The Chelsea Set be read in five years? Are you pre- pared for the years of effort, 'the long defeat of doing nothing well'? As the years pass writing will not become any easier, the daily effort will grow harder to endure, those 'powers of ob- servation' will become enfeebled; you will be judged, when you reach your forties, by per- formance and not by promise.

'My next novel is going to be about St. Tropez.' 'I didn't know you'd ever been there.'

'I haven't. A fresh eye's terribly important. I thought we might settle down there for six months.'

'There wouldn't be much left of the advance by that time.'

'The advance is only an advance. I get 15 per cent after 5,000 copies and 20 per cent after ten. And, of course, another advance will be due, darling, when the next book's finished. A bigger one if The Chelsea Set sells well.'

`Mr. Dwight says it will. He ought to know.' 'My uncle would start me at twelve hundred.' 'But, darling, how could you come then to St.

'Perhaps we'd do better to marry when you came back.'

She said harshly, 'I mightn't come back if The Chelsea Set sells well enough.'

She looked at me and the party of Japanese gentlemen. She finished her wine. She said, `Is this a quarrel?'

'I've got a title for the next book—The Azure Blue.'

`I thought azure was blue.'

She looked at him with disappointment. 'You don't really want to be married to a novelist, do you?'

'I was born one—Mr. Dwight says. My powers of observation . .

'Yes. You told me that, but, dear, couldn't you observe a bit nearer home? Here in London.'

Tye done that in The Chelsea Set. I don't want to repeat myself.'

The bill had been lying beside them for some time now. He took out his wallet to pay, but she snatched the paper out of his reach. She said, 'This is my celebration.'

'The Chelsea Set, of course. Darling, you're awfully decorative, but sometimes—well, you simply don't connect.'

He submitted, just as two of the Japanese gentlemen gake tongue simultaneously, then stopped abruptly and bowed to each other as though they were blocked in a doorway. I had thought the two young people matching miniatures, but what a contrast there was in fact. The same type of prettiness could contain weak- ness and strength. Her Regency counterpart, I suppose, would have born a dozen children with- out the aid of anaesthetics, while he would have fallen an easy victim to the first dark eyes in Naples. Would there one day be a dozen books on her shelf? They have to be born without an anaesthetic, too. I found myself hoping that The Chelsea Set would prove to be a disaster and that eventually she would take up photographic modelling while he established himself solidly in the wine-trade in St. James's. I didn't like to think of her as the Mrs. Humphrey Ward of her generation—not that I would live so long. Old age saves us from the realisation of a great many fears. I wondered to which publishing firm Dwight belonged. I could imagine the blurb he would have already written about her 'abrasive powers of observation.' There would be a photo, if he was wise, on the back of the jacket, for reviewers, as well as publishers, are human, and she didn't look like Mrs. Humphrey Ward.

I could hear them talking while they found their coats at the back of the restaurant. He said, `I wonder what all those Japanese were doing here.'

`Japanese?' she said. `What Japanese, darling? Sometimes you are so evasive I think you don't want to marry me at all.'