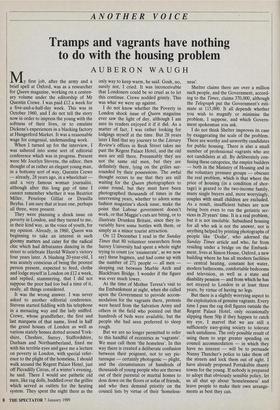 Tramps and vagrants have nothing to do with the housing problem

My first job, after the army and a brief spell at Oxford, was as a researcher for Queen magazine, working on a centen- ary volume under the editorship of Mr Quentin Crewe. I was paid £12 a week for a five-and-a-half-day week. This was in October 1960, and I do not tell the story now in order to impress the young with the softness of their lives, or to emulate Dickens's experiences in a blacking factory at Hungerford Market. It was a reasonable wage for congenial, undemanding work.

When I turned up for the interview, I was ushered into some sort of editorial conference which was in progress. Present were Mr Jocelyn Stevens, the editor, then thought of as rather an elegant young man, in a bottomy sort of way, Quentin Crewe — already, 28 years ago, in a wheelchair and a very famous woman journalist, although after this long gap of time I cannot remember whether it was Beatrice Miller, Penelope Gilliat or Drusilla Beyfus. I am sure that at least one, perhaps all three, were present.

They were planning a shock issue on poverty in London, and they turned to me, in their kind way, as the voice of youth, for my opinion. Already, in 1960, Queen was beginning to take an interest in such gloomy matters and cater for the radical chic which had débutantes dancing in the street to celebrate Harold Wilson's victory four years later. A blushing 20-year-old, I was acutely conscious of being the poorest person present, expected to feed, clothe and lodge myself in London on £12 a week, and replied, stammering, that I did not suppose the poor had too bad a time of it, really, all things considered.

It was the wrong answer. I was never asked to another editorial conference. Stevens started fiddling with his telephone in a menacing way and the lady sniffed. Crewe, whose grandfather, the first and last marquess of that name, lived in half the grand houses of London as well as various stately homes dotted around York- shire, Cheshire, Surrey, Staffordshire, Durham and Northumberland, fixed me with his terrible eyes and gave me a lecture on poverty in London, with special refer- ence to the plight of the homeless. I should walk around the Regent Palace Hotel, just off Piccadilly Circus, of a winter's evening, he said. There I would see pathetic old men, like rag dolls, huddled over the grilles which served as outlets for the heating system. They spent the night there as the only way to keep warm, he said. Gosh, no, surely not, I cried. It was inconceivable that Londoners could be so cruel as to let this continue. Crewe nodded grimly. This was what we were up against.

I do not know whether the Poverty in London shock issue of Queen magazine ever saw the light of day, although I am sure its readers enjoyed it if it did. As a matter of fact, I was rather looking for lodgings myself at the time. But 28 years later I find that my journey to the Literary Review's offices in Beak Street takes me past the Regent Palace Hotel, and the old men are still there. Presumably they are not the same old men, but they are definitely there, lying on the grilles sur- rounded by their possessions. The awful thought occurs to me that they are still waiting for the Queen photographers to come round, but they must have been photographed thousands of times in the intervening years, whether to adorn some fashion magazine's shock issue, make the point that Labour government doesn't work, or that Maggie's cuts are biting, or to illustrate Drunken Britain, since they in- variably have some bottles with them, or simply as a minor tourist attraction.

On 12 December I read in the Sunday Times that 80 volunteer researchers from Surrey University had spent a whole night trying to count (or 'enumerate', as we now say) these bagmen, and had come up with the number of 271 people — all men sleeping out between Marble Arch and Blackfriars Bridge. I wonder if the figure was ever much lower.

At the time of Mother Teresa's visit to the Embankment at night, when she called upon the Government to provide accom- modation for the vagrants there, protests were heard from the Salvation Army and others in the field who pointed out that hundreds of beds were available, but the people she had seen preferred to sleep rough.

But we are no longer permitted to refer to this handful of eccentrics as `vagrants'.

We must call them `the homeless'. In this way there is created a deliberate confusion between their poignant, not to say pic- turesque — certainly photogenic — plight, and the circumstances of hundreds of thousands of young people who are thrown out of their parental or marital homes to doss down on the floors or sofas of friends, and who then demand priority on the council lists by virtue of their 'homeless- ness'.

Shelter claims there are over a million such people, and the Government, accord- ing to the Times, claims 370,000, although the Telegraph put the Government's esti- mate at 115,000. It all depends whether you wish to magnify or minimise the problem, I suppose, and which Govern- ment spokesman you ask.

I do not think Shelter improves its case by exaggerating the scale of the problem. There are worthy and unworthy candidates for public housing. There is also a small number of professional vagrants who are not candidates at all. By deliberately con- fusing these categories, the empire builders — both in the Ministry of Housing and in the voluntary pressure groups — obscure the real problem, which is that where the price of housing (in a condition of shor- tage) is geared to the two-income family, many single buyers and, more worryingly, couples with small children are excluded. As a result, insufficient babies are now being born even to run the geriatric ser- vices in 20 years' time. It is a real problem, but it is not insoluble. Subsidised housing for all who ask is not the answer, nor is anything helped by printing photographs of people like `Dodie', who adorned the Sunday Times article and who, far from residing under a bridge on the Embank- ment, lives at Simon House, Oxford, a new building where he has all modern facilities — central heating, constant hot water, modern bathrooms, comfortable bedrooms and television, as well as a state and disability pension— and from which he has not strayed to London in at least three years, by virtue of having no legs.

But there is a slightly worrying aspect to the exploitation of genuine vagrants. Every time I pass the rag doll figures outside the Regent Palace Hotel, only occasionally slipping them 50p if they happen to catch my eye, I marvel that we are still a sufficiently easy-going society to tolerate such untidiness. The only possible result of using them to urge greater spending on council accommodation — in which they have no interest — will be to persuade Nanny Thatcher's police to take them off the streets and lock them out of sight. I have already proposed Portakabin shanty towns for the young. If nobody is prepared to adopt that obviously sensible policy, let us all shut up about 'homelessness' and leave people to make their own arrange- ments as best they can.