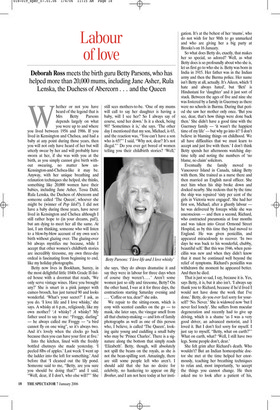 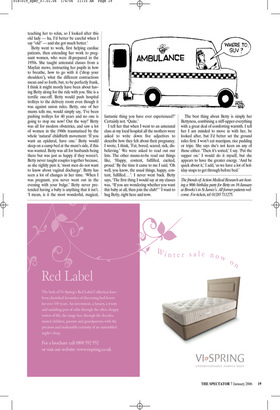 Deborah Ross meets the birth guru Betty Parsons, who has helped more than 20,000 mums, including Jane Asher, Rula Lenska, the Duchess of Abercorn ... and the Queen Whether or not you have heard of the legend that is Mrs Betty Parsons depends largely on what you were up to and where you lived between 1956 and 1986. If you lived in Kensington and Chelsea, and had a baby at any point during those years, then you will not only have heard of her but will utterly swear by her and will probably have sworn at her, if she was with you at the birth, as you simply cannot give birth without swearing, no matter how unKensington-and-Chelsea-like it may be. Anyway, with her unique breathing and relaxation techniques she helped, she thinks, something like 20,000 women have their babies, including Jane Asher, Tessa Dahl, Rula Lenska, the Duchess of Abercorn and someone called ‘The Queen’, whoever she might be (winner of Pop Idol?). I did not have a baby during those years, have never lived in Kensington and Chelsea although I still rather hope to (in your dreams, pal!), but am dying to meet her all the same. At last, I am thinking, someone who will listen to a blow-by-blow account of my own son’s birth without glazing over. The glazing-over bit always mystifies me because, while I accept that other women’s childbirth stories are incredibly tiresome, my own three-day ordeal is fascinating from beginning to end, like my holiday photographs.

Betty now lives in Bookham, Surrey, in the most delightful little 1840s Grade II-listed house with a doormat that reads, ‘We only serve vintage wines. Have you brought any?’ She is smart in a pink jumper with cameo brooch, has just turned 90 and looks wonderful. ‘What’s your secret?’ I ask, as you do. ‘I love life and I love whisky,’ she says. A whisky at 6 p.m., religiously, like my own mother? ‘A whisky? A whisky? My father used to say to me: “Froggy, darling” — he always called me Froggy — “a bird cannot fly on one wing”, so it’s always two. And it’s lovely when the clocks go back because then you can have your first at five.’ Into the kitchen, lined with the freshly bottled chutneys she made yesterday. ‘I peeled 8lbs of apples.’ Last week ‘I went up the ladder into the loft for something.’ And before that ‘I cleaned out the lily pond. Someone said to me, “Betty, are you sure you should be doing that?” and I said, “Well, dear, if I don’t, who else will?”’ She still sees mothers-to-be. ‘One of my mums will call to say her daughter is having a baby, will I see her? So I always say of course, send her down.’ Is it a shock, being 90? ‘Sometimes it is,’ she says. ‘The other day I mentioned that my son, Michael, is 65, and the reaction was, “You can’t have a son who is 65!”’ I said, “Why not, dear? It’s not illegal.”’ Do you ever get bored of women telling you their childbirth stories? ‘Well,’ she says, ‘they do always dramatise it and say they were in labour for three days when of course they weren’t.... ’ Aren’t some women just so silly and tiresome, Betty? On the other hand, I was at it for three days, the contractions starting Saturday evening and . .. ‘Coffee or tea, dear?’ she asks.

We repair to the sitting-room, which is cosy with scented candles on the go — to mask, she later says, the vinegar smell from all that chutney-making — and lots of family photographs as well as one of this person who, I believe, is called ‘The Queen’, looking quite young and cuddling a small baby who may be ‘Prince Charles’. There is a signature along the bottom that simply reads ‘Elizabeth’. Betty, though, will absolutely not spill the beans on the royals, as she is not the bean-spilling sort. Amazingly, there are still some people left who aren’t. I should add that she has no desire for celebrity, no hankering to appear on Big Brother, and I am not here today at her insti gation. It’s at the behest of her ‘mums’, who do not wish for her 90th to go unmarked and who are giving her a big party at Brooks’s on 16 January.

So what does Betty do, exactly, that makes her so special, so adored? Well, as what Betty does is so profoundly about who she is, let us first go to who she is. Betty was born in India in 1915. Her father was in the Indian army and then the Burma police. Her name isn’t Betty at all, actually. It’s Aileen, which ‘I hate and always hated’, but ‘Beti’ is Hindustani for ‘daughter’ and it just sort of stuck. Between the ages of five and nine she was fostered by a family in Guernsey as there were no schools in Burma. During that period she saw her mother only once. ‘But you see, dear, that’s how things were done back then.’ She didn’t have a good time with the Guernsey family — ‘it wasn’t the happiest time of my life’ — but why go into it? ‘I don’t believe in blaming things on childhood. We all have difficulties that we must learn to accept and just live with them.’ I don’t think Betty spends her afternoons watching daytime telly and noting the numbers of ‘no blame, no claim’ solicitors.

Eventually the family moved to Vancouver Island in Canada, taking Betty with them. She trained as a nurse there and then married an English naval officer. She met him when his ship broke down and docked nearby. She reckons that by the time the ship was repaired ‘sixty per cent of the girls in Victoria were engaged’. She had her first son, Michael, after a ghastly labour he was delivered by forceps while she was unconscious — and then a second, Richard, who contracted pneumonia at four months and was taken into Great Ormond Street Hospital, as by this time they had moved to England. He was given penicillin, and appeared miraculously to recover. ‘In two days he was back to his wonderful, chubby, beautiful self.’ But this was 1946, when penicillin was new and when they didn’t know that it must be continued well beyond the relief of symptoms. Richard’s penicillin was withdrawn the moment he appeared better. And then he died.

That is just so sad, I say, because it is. Yes, says Betty, it is, but it also isn’t. ‘I always say thank you to Richard, because if he’d lived I would not have done the work that I’ve done.’ Betty, do you ever feel sorry for yourself? ‘No. Never.’ She is widowed now ‘but I never feel lonely’. She suffers from macular degeneration and recently had to give up driving, which is a shame ‘as I was a very good driver, an advanced motorist, and I loved it. But I don’t feel sorry for myself. I just say to myself, “Betty, what on earth?”’ What on earth, what? ‘Well, I still have two legs. Some people don’t, dear.’ She felt grim after Richard’s death. Who wouldn’t? But an Indian homeopathic doctor she met at the time helped her enormously, teaching her breathing techniques to relax and, most importantly, ‘to accept the things you cannot change. He then asked me to look after a patient of his, teaching her to relax, so I looked after this old lady — ha, I’d better be careful when I say “old” — and she got much better.’ Betty went to work, first helping cardiac patients, then extending her work to pregnant women, who were ill-prepared in the 1950s. She taught antenatal classes from a Mayfair mews, instructing her pupils in how to breathe, how to go with it (‘drop your shoulders’), what the different contractions mean and so forth; but, to be perfectly frank, I think it might mostly have been about having Betty along for the ride with you. She is a terrific one-off. Betty would push hospital trolleys to the delivery room even though it was against union rules. Betty, one of her mums tells me, would simply say, ‘I’ve been pushing trolleys for 40 years and no one is going to stop me now! Out the way!’ Betty was all for modern obstetrics, and saw a lot of women in the 1960s traumatised by the whole ‘natural’ childbirth movement: ‘If you want an epidural, have one.’ Betty would sleep on a camp bed at the mum’s side, if this was wanted. Betty was all for husbands being there but was just as happy if they weren’t. Betty never taught couples together because, as she rightly puts it, ‘most men do not want to know about vaginal discharge’. Betty has seen a lot of changes in her time. ‘When I was pregnant, you never went out in the evening with your bulge.’ Betty never pretended having a baby is anything that it isn’t. ‘I mean, is it the most wonderful, magical, fantastic thing you have ever experienced?’ Certainly not. ‘Quite.’ I tell her that when I went to an antenatal class at my local hospital all the mothers were asked to write down five adjectives to describe how they felt about their pregnancy. I wrote, I think, ‘Fat, bored, scared, sick, disbelieving.’ We were asked to read out our lists. The other mums-to-be read out things like, ‘Happy, content, fulfilled, excited, proud.’ By the time it came to me I said, ‘Oh well, you know, the usual things, happy, content, fulfilled... ’. I never went back. Betty says, ‘The first thing I would say at my classes was, “If you are wondering whether you want this baby at all, then join the club!”’ I want to hug Betty, right here and now. The best thing about Betty is simply her Bettyness, combining a stiff-upper-everything with a great deal of comforting warmth. I tell her I am minded to move in with her, be looked after, but I’d better set the ground rules first. I won’t eat marzipan, rice pudding or tripe. She says she’s not keen on any of those either. ‘Then it’s sorted,’ I say. ‘Put the supper on.’ I would do it myself, but she appears to have the greater energy. ‘And be quick about it,’ I add, ‘as we have a lot of holiday snaps to get through before bed.’

The friends of Action Medical Research are hosting a 90th birthday party for Betty on 16 January at Brooks’s in St James’s. All former patients welcome. For tickets, tel: 01285 711275.